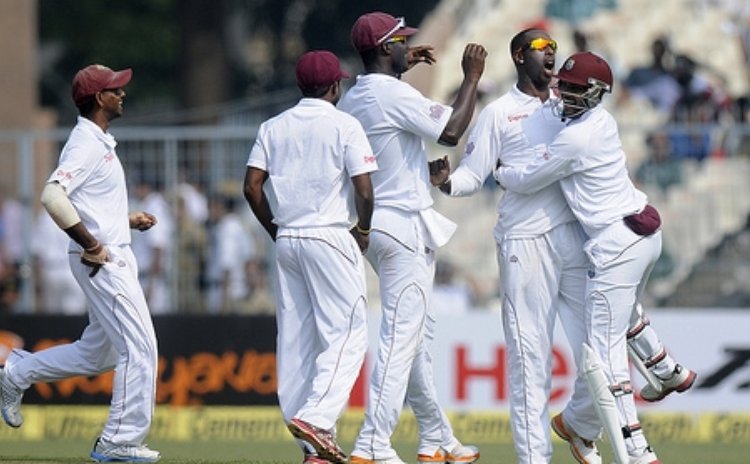 KOLKATA, India – A dramatic batting collapse after tea under the pressure of high quality swing bowling from Mohammad Shami sent West Indies crashing to an innings and 51-run defeat in the first Test against India on Friday here.

None of the Windies batsman looked safe at the crease once Shami returned after the break for a third spell from the High Court End (south) and got the ball to reverse swing prodigiously, and the visitors were all out for 168 in their second innings about 20 minutes before the scheduled close on the third day at Eden Gardens.

A handful of the West Indies' batsmen got starts, but no one carried on – Darren Bravo's 37 was the top score, Kieran Powell made 36, Chris Gayle hit 33 and Shivnarine Chanderpaul was not out on 31 – as Shami collected 5-47 from 13.1 overs to finish with the second-best match figures by an Indian on Test debut of 9-118 and off-spinner Ravichandran Ashwin captured 3-46 off 19 overs.

The result was formalised when tail-ender Sheldon Cottrell, playing his first Test, was bowled with another sharp in-ducker from Shami for five to a deafening roar from a crowd that built to close to capacity by the time the match was completed.

The victory gave India a 1-0 lead in the two-Test series with the final match starting this coming Thursday at the Wankhede Stadium in Mumbai, the home city of the hosts' batting megastar Sachin Tendulkar, who will be playing his 200th and final Test for his homeland.

This all unfolded after spinners Shane Shillingford and Veerasammy Permaul shared the last four wickets following a record seventh-wicket partnership between century-makers Rohit Sharma, the Man-of-the-Match, and Ashwin, as India were bowled out for 453 in their first innings about 10 minutes before lunch.

Off-spinner Shillingford ended with 6-167 from 55 overs and left-arm spinner Permaul grabbed 2-67 from 23.4 overs.

It brought an end to the long, hard toil for the Windies, after Sharma with a debut Test hundred and top score of 177 and Ashwin with his second Test hundred of 124 shared a monumental 280 to transform the fortunes of their side. It was the highest seventh-wicket stand for the Indians ever in a Test.

Gayle gave West Indies a blistering start with a number of powerful off-side strokes, but the Caribbean side's plans to remain competitive in the match were left in strife, as they stumbled to 112 for three at tea.

Gayle fell to fast-medium bowler Bhuvneshwar Kumar for the second time in the match. He miscued a hook at a short, wide delivery from his nemesis in recent contests against this opponent and was caught at square leg.

For the duration of Gayle's innings, Powell had been scoreless and he was fortunate, when off-spinner Ashwin dropped a return catch in his first over from a leading edge.

Powell needed 31 balls in 21 minutes to get his first run and fortune again favoured him on seven, when Kumar running a few yards to his right and diving dropped him at deep backward square leg from the bowling of left-arm spinner Pragyan Ojha.

Bravo, on nine, had two close shaves off successive deliveries in Ashwin's eighth over, when he drove the off-spinner uppishly past silly mid-off and then edged just short of second slip fielder Virat Kohli playing defensively forward.

The two however, spent close to 1 ½ hours defying the Indian attack, putting on 68 for the second wicket, and were just shutting shop ahead of tea, when Powell was lbw playing back to a shooter from Ashwin.

Next over, Marlon Samuels was dubiously adjudged lbw to Shami for four, when he played back to a delivery that swung in sharply. Television replays suggested the delivery might have missed leg-stump.

After tea, there was little substance or stability from the West Indies batting and they lost their last seven wickets for 48 in less than 20 overs.

Bravo had looked untroubled during his innings, but he mistimed a cut and was caught at backward point off Ashwin in the second over after the break, leaving the Windies 120 for four.

Three overs later, Shami started his demolition of the lower half of the batting, when he had Denesh Ramdin caught at forward short leg for one from an inside edge that ricocheted off his thigh pad.

West Indies captain Darren Sammy had his technique examined by a few searching deliveries from Shami and managed to stem the fall of wickets for about 40 minutes.

But the final nail was hammered into the visitors' coffin, when three wickets fell on the same in Shami's 11th over, leaving West Indies 152 for eight.

Sammy and Shillingford were bowled by deep in-swingers from Shami for eight and a duck respectively in the space of three deliveries, extracting their middle-stumps in spectacular fashion, before Permaul was run out for a duck from the penultimate delivery, when he absent-mindedly walked out of the crease after being struck on the boot and survived an lbw appeal.

Tino Best was caught at deep mid-wicket off Ashwin for three before Shami brought the curtain down on a memorable debut by dispatching his fellow Test newcomer Cottrell.

Before lunch, West Indies had gone wicket-less through the first hour of the morning, after India resumed from their overnight total of 354 for six, and Sharma and Ashwin continued the grind.

The Windies had to wait until about 35 minutes before the interval to claim their first scalp of the day, when Permaul gained a dubious lbw decision to remove Sharma, whose innings included 23 fours and one six from 301 balls.

Television replays suggested the batsman may have been struck outside the line of off-stump and Sharma stood in amazement for a period after English umpire Richard Kettleborough delivered the verdict before trudging away.

Three overs later, Shillingford claimed five wickets in an Test innings for the fifth time in his 11 matches, when he bowled the lanky Ashwin behind his back from an attempted sweep, ending an innings that contained just 11 four from 210 deliveries.

Shillingford then had Kumar caught at slip for 12, and Permaul brought the innings to a close, when he had Shami stumped for one charging down the pitch to slog, leaving Ojha not out on two.

B. Kumar c Gayle b Shillingford 12

S. Chanderpaul not out 31

Result: India won by an innings and 51 runs