Dominica opens its carnival season with a grand parade 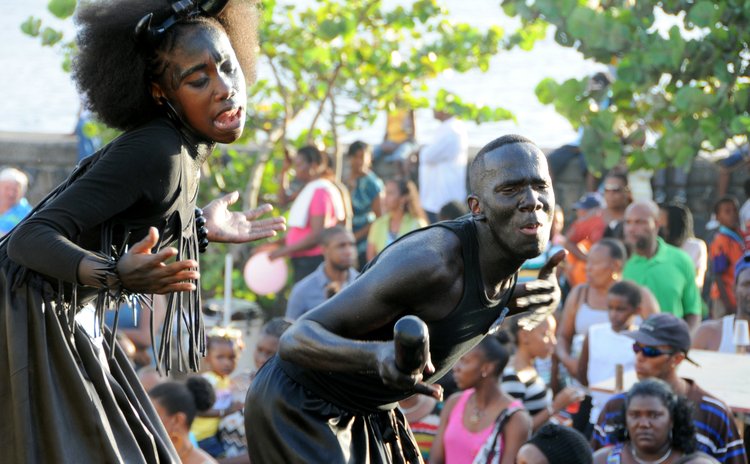 Dominican Mas at its darkest best- on the Roseau Bayfront

Maybe it was the change of direction from north to south; maybe it was the theme- Non Konet Viv (we know how to live); maybe it's the beginning of the end of the decline of Dominica's carnival.

Whatever the "maybe", the 2014 opening of carnival on Saturday afternoon had a special "pep in its step"; a "fire in its wire"; a new "groove in its move." (Ted, our Bosom Buddy, the retired DBS Radio DJ, would love these rhymes. By the way, have you heard his unique laugh? Can we make it part of carnival?).

At 3.oo pm on Saturday afternoon thousands lined the route of the carnival opening parade from the Pottersville Savannah, to the E.C. Loblack Bridge, up Independence Street and then to the Dame Eugenia Charles Boulevard.

They were all there: Darkies, as black as the heart of Satan; Moko Jumbies, as tall as Dominican mountains; Queen-hopefuls, as beautiful as Cleopatra; Colihaut Ban Move, masked men frighteningly menacing, colourfully dressed, and darting here and there. And hundreds, maybe thousands, of spectators. They were all there.

"Non Konet Viv! Let me hear you make some noise," shouted Leslassa Armour-Shillingford, the 2013 Carnival Queen as she welcome the end of the parade (or was it the beginning of Mas Dominik 2014?). And she added that Dominicans should "keep the spirit of 'Non Konet Viv' anchored within us," whatever that means.

"De action starts now," said Ian Douglas, the Tourism Minister as he addressed the obviously distracted listeners. "The excitement is here, we are all here. Our unique and special, distinctive carnival season is open in the nature island of the World."

But listening to Douglas, a spectator quipped: Where are the tourists to see that? And, we'll admit he has a point there. Like its abundant water resources that flows endlessly to the ocean, Dominica appears to be wasting another valuable resource- its rich cultural heritage. And the Tourism Minister is aware of this, it seems.