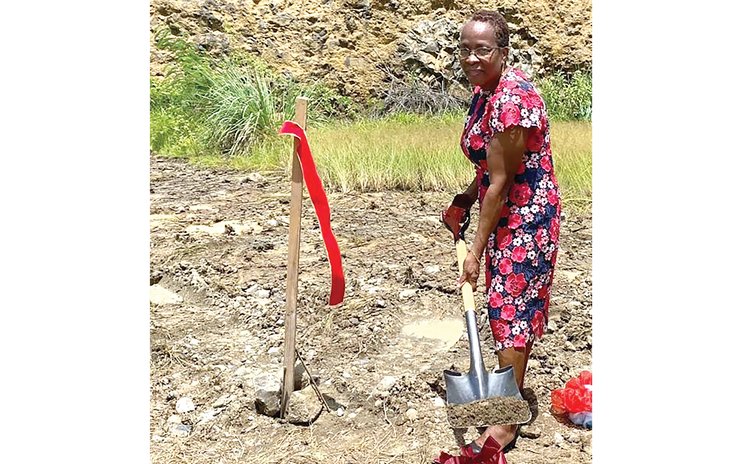 Josephine Robinson remembers a time when she worried whether her new business, Gentle Rest Funeral Services, would ever become sustainable.

In fact, the business proprietor recalls that when started back on September 3, 2002, the company only sold one coffin within their first year and had to shut down four times before re-establishing it in 2007 at its present location in St Joseph.

Twenty years later, life now paints a rather different picture for the company which will next year open a first-of-its-kind funeral home and crematorium in Jimmit.

Speaking exclusively to The Sun, following the groundbreaking and contract signing of the 2700 square feet building, Robinson highlighted that despite the many challenges, her drive to make this dream a reality is what kept her going throughout the years.

"It's about the joy, the gratification that comes from all the hard work, the nervousness, the support and love that drove me even on my low days," she said. "There were many days when I thought that it wouldn't work, but what I did was take a step back, breathe and redirect."

She went on to declare that notwithstanding the hurdles Gentle Rest has been a "model for change", and has changed the face of the funeral industry in Dominica, as well as earning the respect and support of their colleagues in the region and beyond.

"While there are challenges, we see them as opportunities for continued growth and development. If you were to ask me, then, what was my greatest challenge, I would have echoed financial, which today still is and will remain throughout. But with a quiet result, I will alter human resources," Mrs. Robinson said.

Among their new services which will be offered is cremation, which Mrs. Robinson revealed many people have expressed interest in. However, she notes that to deal with the current space issues which Dominica is presently facing at the burial ground, a lot more public knowledge will be required on cremation, which she and her team stands ready to do.

In providing an overview of the construction, project advisor Mr. Eddison Henry said that the first floor of the two-storey structure will house sections such as the crematorium, the preparation room, the refrigeration room, as well as quarters for the staff who may be on call from time to time to meet the demands of the Gentle Rest service.

Also included on this floor will be a display room where families will be allowed to see the products that will envelop their loved ones, a chapel which will double as a conference facility, the general offices as well as provision for the general manager's office.

The top floor, he revealed, will serve for other activities both in a "celebratory and sombre mood."

He stressed that this will be an ideal location "symbolic for sunsets," as the building will be picturesquely placed on the west coast of the island nestled on a small hilltop which is typical for Dominica and architecture.

"It also encompasses elements of classical, mediaeval and modern architecture, in the sense that if you look at the building, you will see the dominance of Roman columns. And that is also symbolic of the imagery that we get when we hope to move to the last place after leaving this life," Henry said.