A dark world full of light 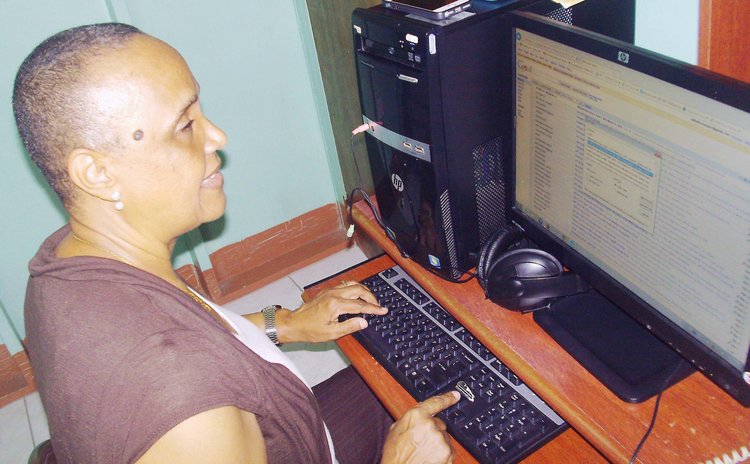 Nathalie Murphy-Rolle has a ready laugh, even when she talks about the curve balls life has thrown her.

Though she has had to struggle with deteriorating eyesight from the age of five before going blind at the age of 18, Nathalie remains positive, proactive and dynamic.

We caught up with Nathalie at the Goodwill offices of the Dominica Association of People with Disabilities (DAPD) where she spoke about her life and the organisation.

Born in Giraudel, Nathalie said she enjoyed good vision as a young child until the age of five when her eyes began to rebel. Nathalie's teacher informed her parents that something was wrong as she could not read from the chalkboard.

Back then, Dominica did not have an eye specialist, but visiting specialists from Barbados tested and diagnosed her with congenital cataracts. A doctor prescribed glasses and recommended surgery, failing which she would go blind, he warned.

Nathalie did the best she could until she got her glasses nearly one year later. But even with the glasses, reading was difficult and she required the help of friends at school.

Education was a major struggle for her, but when it was time for her to get a job, her volunteer work at the St Mary's Credit Union and training as a member of the Young Christian Workers Youth Group paid off. Nathalie was able to get a job as a secretary at the Eggleston/Giraudel Village Council. Until then, she could still see—albeit barely.

When the time came for Nathalie to change her glasses, Dominica had an eye specialist who recommended emergency surgery. Luckily, his advice coincided with a conference of regional eye specialists in Dominica and the surgery was done. Follow-up surgery was imperative, this time in Jamaica and, with funding from the Government of Dominica, the hopeful teenager made the trip.

The operation was successful. And suddenly, her world was clearer and full of colour.

Sadly, her newfound joy was short-lived.

"Six weeks after I came back home, the trouble started," Nathalie said. A hemorrhage started in her left eye and it became blind.

Gradually, her vision in the right eye deteriorated too. By the time she was 18 years old, her world slipped into darkness. "The sight just left me," she said wistfully.

Nathalie lost her job. And she could no longer read-- one of her treasured hobbies. Her parents and siblings had to read for her and Nathalie worried that she might now be a burden for them.

The turning point for Nathalie came when she joined the Workshop for the Blind. This set in motion a stream of circumstances that led to marriage, a national award and an enduring legacy in humanitarian service.

In 1983, the group, Disabled People International told the local association about a major assembly in Barbados. Reginald Rolle, whom she subsequently married, represented Dominica. He returned enlightened and brimming with ideas—what about a national association for all people with disabilities?

That year, Nathalie attended a regional training programme in Trinidad and with their exposure and new ideas, she and her husband took concrete steps to form the association, which started in 1983 and opened its first office in 1987.

"The opportunities opened up. We would go to several training programmes. Every year, we would go to a different country and we became empowered as persons with disabilities…" she said. Sadly, life threw her another curve ball when her first husband died in 2003. Yet, she found love again and in 2007, she tied the knot with Michael Murphy.

Through her self-sacrificing work with differently-able people, Nathalie has become a household name in Dominica and became a Meritorious Service Award winner

She has overseen progress in the community of the disabled and changes in people's attitudes towards them. Significantly, more disabled people are being accepted into schools.

Nathalie was among DAPD advocates for the UN Convention on the Rights of Persons with Disabilities, which Dominica eventually ratified.

Elements of the Convention are slowly being implemented, she said, but relevant legislation needs to be enacted and laws revised.

Meantime, she calls on others to help make the lives of the disabled easier; the private sector can make facilities 'disabled-friendly', and also consider employing disabled persons. The DAPD is preparing to implement its 2015-2019 Development Programme with increased emphasis on advocacy and focus on entrepreneurship and equal opportunities.

They continue to help teach the blind to cope, adjust, interact and find their way around. DAPD also assists disabled persons to source essential aids, such as wheelchairs and is entering a partnership with a French group, which will help them access more aids and devices for the disabled.

DAPD's skills development programmes make it easier for disabled persons to get jobs and one plan is to help the newly blind adjust to their new world emotionally and physically within their homes.

Ensconced between the freshly painted green walls of the DAPD, Nathalie said she is far more independent than she was years ago, now that her computers have the JAWS screen reader which has opened up the world of technology to her.

At church last month, her priest asked her if she would like to see again.

"I said 'no, I am quite comfortable and happy as I am…'" she laughed.