A hotel in the Cabrits National Park

Madness or an economic opportunity? 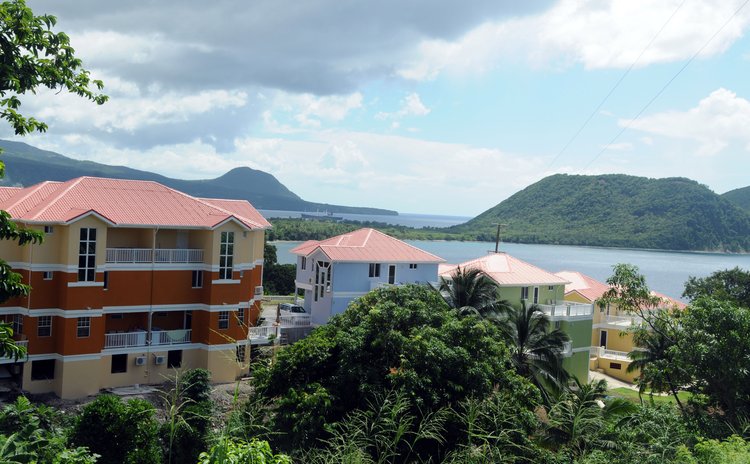 Cabrits in the background, seen from the villas at Cottage

Government wants to build a luxury hotel in the beautiful Cabrits national park on the north western tip of Dominica but an environmentalist and the opposition United Workers Party (UWP) say that is a big, big mistake.

"You are taking this back-to-front-upside-down decision, you are going to take land that's protected for future generations in an area where there are hundreds of acres of land," said physical planner and UWP Senator Isaac Baptiste.

"You cannot destroy one asset to create another," said environmentalist Bernard Wiltshire. "There are many other places we can put hotels, you don't have to put a hotel there."

Added Wiltshire: "It sends a very bad signal to the rest of the world, climate change and the cutting down of trees, the maltreatment of nature, which is destroying the world, for you the Nature Island of the Caribbean to be going down that road make no sense whatsoever."

The furor erupted when Parliament, at its meeting on February 20th 2015, passed a Bill to amend the National Parks and Protected Areas Act Chapter 42:02.

Before the meeting of Parliament, Prime Minister Roosevelt Skerrit told state-owned DBS radio that the Act will allow Government "to hatch out a certain amount of land from the Cabrits National Park to allow for an economic project, a project of economic benefit."

He added: "Under the Economic Citizenship Programme we have approved for a tourism project which involves hotel construction of about 120 rooms, villas and hotel in the north of Dominica, in Portsmouth. To allow that investment to carry through we would have to amend the National Parks Act to hatch off this portion out of the National Park to allow construction activities to take place there."

Four months before the amendment of the Act, the Government of Dominica signed an agreement with Range Capital Partners Ltd and the Kempinski Group at a ceremony held at the Fort Young Hotel in November 2014, just a few days before the December 2014 general election.

"We believe that Douglas Bay in Cabrits is one of the finest beaches in that part of the Caribbean. It's a site which has privacy and allows for the creation of a unique hotel product, a hideaway resort," said Mohammed Assari of Range Capital at the signing ceremony on November 7th 2014. "From today work will start, design work will commence immediately, environmental, which we are very sensitive to, will be undertaken with all sensitivities and ensure that what is designed and built is something which has harmony between land and sea, between waves and wildlife, and ensuring experience from sunrise to sunset…"

At the February 20th meeting of Parliament, as expected, ministers of government stood behind their decision.

"The assets of the State, I propose, should be used to attract investment and that is precisely what Government is trying to do," said Ian Douglas, Parliamentary Representative for Portsmouth and Minister for Energy. "Put simply, I want the people of Dominica to understand, the listeners of the sound of my voice to understand that all Government is trying to do is develop 15 acres of land to create a 100 room five star hotel to create 500 jobs... I have no problem with that, Madame Speaker, and I am sure that the constituents of Portsmouth, Cottage, Vieille Case and all of Dominica have absolutely no problem with the Government's move to create more sustainable jobs and ultimately sustainable development for the Commonwealth of Dominica."

Dr. Kenneth Darroux, the Minister for the Environment said he is assuring Dominicans that the country is not deviating from its environmentally friendly reputation. Dr. Darroux said the project is sustainable.

"Once we can meet the needs of the present and we are sure we are not compromising the future needs or the needs of future generations, Madame Speaker, it means that the development is sustainable," Dr.Darroux said. "The idea that the national park is sacred is a very outdated idea, it has been proven that once the development adds value to whatever exists, Madame Speaker, there is no reason as minister for the environment I shouldn't support this."

Prime Minister Skerrit said the opposition UWP was concerned about the building of hotels in a national park but that practice occurs all over the world.

After naming about a dozen such parks in North America and Africa, Skerrit said "a national park is not something that people should not be able to use and generate economic activity from." But Baptiste said by using these examples the Prime Minister was misleading the people of Dominica.

If the Government follows through with its plans, the project will be developed on 15 acres of land in Douglas Bay, Cabrits and it will cost approximately $100 million.