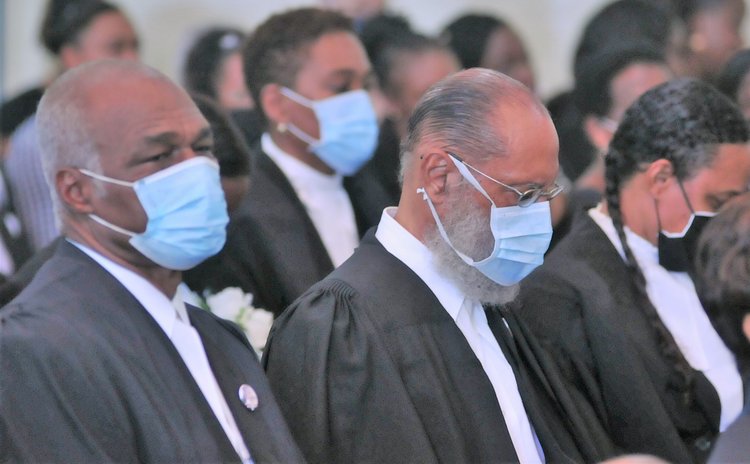 Me in the late nineties: "Mikey, teach me some kweyol. All I know is sa ka fete and garcon."

Much later, hanging out with friends, I indicate, in kweyol, that I'm thirsty Laughter erupts. "Who teach you that, Mikey? Girl you should know better than that. How long you know Mikey?" And he had this deadpan lawyer way of arguing and pointing out that 'I'm thirsty' was the literal meaning of the phrase he'd taught me: Suffice it to say I went elsewhere for my kweyol lessons thereafter.

'How long you know Mikey?', was a rhetorical question that would be posed countless times over the years, usually in response to my reaction to something crazy that he said or did. But the answer to that question is, more than four decades.

Mikey and I met in Cuba when I was 17. We were both part of our respective country's delegation to CARIFESTA, in the heady months following the Grenada Revolution. And there began a friendship that lasted till his transition. We talk about when your 'spirit gives' with someone? Our spirits gave! When I became seriously ill on that trip, Mikey did not leave my bedside Of course, Mikey being Mikey he turned the experience into a salacious sounding story about me being unconscious and at his mercy. And he told the story every time JI landed in Dominica, embellishing it a little more every year. I had to content myself with an, "In your dreams, boy,' response, which, naturally, gave rise to graphic descriptions of his dreams.

After we left Cuba, he somehow became stranded in Grenada for several days. And again, Mikey being Mikey, he made friends with members of the People's Revolutionary Army and Militia and found himself traversing the four corners of Grenada in an army jeep, immersing himself in the then euphoria On March 13, 2020 he continued a tradition he'd started many years before, in his words, "educating the DA masses about the events and significance of Revo Day. They thought I was a historian." With the advent of WhatsApp he'd send me a Happy Birthday message every year on March 13, the anniversary of the Revolution. He never forgot. And every October 25, he'd send just a sad face.

For many years, the highlight of my visit to Dominica was not the actual WCMF which I'd come to attend, but Mikey's open house at his office on World Kweyol Day Tons of food (peas soup with manicou was a staple), lots to drink and Mikey presiding over the United States of CARICOM summit, where grave issues were vociferously debated. Is it lambie or conch? Titiri, tri- tri, ti-twi, or twi-twi? You'd think the very future of our tiny nations hinged upon these noisy discussions.

Hail fellow, well met? Definitely! Incorrigible? A thousand yesses! But when in the late eighties I arrived in Dominica with dozens of persons with disabilities for a seminar, and I rang him and said we need XyZ, he went all out to assist. He was always helping a little old lady with groceries, or a student with school supplies, or someone, with something. So, let's just go right ahead and add Humanitarian to this multi-faceted character.

Two months ago, Mikey's response to my concern about reports that he'd been airlifted to Martinique for medical attention was to send me a You Tube video of the Mighty Sparrow singing 'Sparrow Dead' Many of our mutual friends received the same video. Did I say he was incorrigible? None of us was fooled by his attempts at deflection, though. So, On Wednesday June 24, when I awoke to missed calls from several of these very same people, I knew, without having to check the messages, that Mikey was gone. There'd be no more saving the world by two insomniacs at 2:00 a.m.

Ret well my friend. They broke the mold with you for sure