A remarkable house of wood 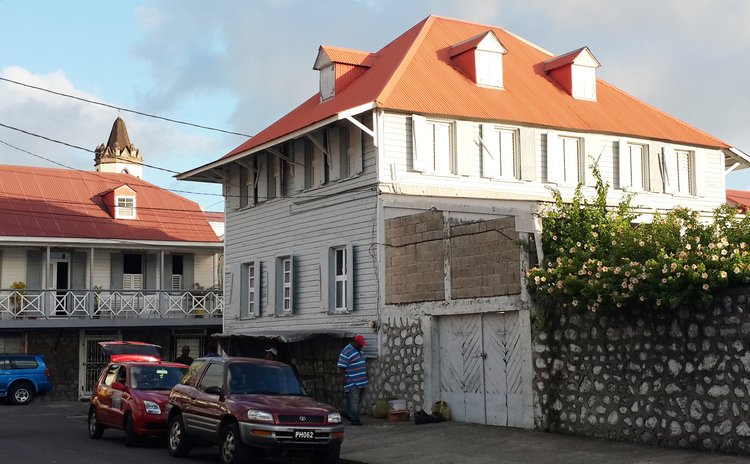 It's pretty hard to miss the beautiful wooden building with a red roof at the corner of Great George and King George V Street in Roseau.

Most persons who pause to gaze at this distinctive building would be stunned to discover that it's about 300 years old, making it one of the island's oldest structures.

This house has remained standing tall through good and bad weather, even surviving 1979s Hurricane David as many others collapsed or were extensively damaged.

Someone closely associated with the building recalled that David's winds swept away some of its galvanized roofing sheets, but the roof frame remained intact, as well as its wooden walls.

It took three years after Hurricane David for the family who own the home to source high-grade galvanized roofing sheets to replace the lost ones.

Meanwhile, the family had to patch the roof with galvanized sheets salvaged from the road after the storm and sheets of lesser quality that were available shortly after the disaster.

The building's floors are made of imported kubari wood from Guyana. However, it is not clear what sort of wood was used for the walls.

Remarkably, despite the vagaries of time, the owners have never had to replace any of the wooden walls.

Built with a hip roof, architect Severin McKenzie noted that the slant of the roof of the centuries-old house is acceptable by today's standards.

He said the pitch of the roof fits the recommended angle of less than 22 degrees for the hurricane zone, which helps resist strong winds.

McKenzie pointed out several other features that have increased the building's resistance to storms.

It has storm shutters, as well as dormer windows and a roof aperture to release hot air/air pressure. Also, braces were installed to reinforce the roof overhang.

While a shorter overhang is the recommended standard nowadays, braces can be used to support a longer overhang, as is the case with this house.

The longevity of this remarkable house clearly shows that with proper building practices and good timber, even a wooden house can weather the severest storms-- and last for centuries!