A storm brewing over Haiti at the OAS 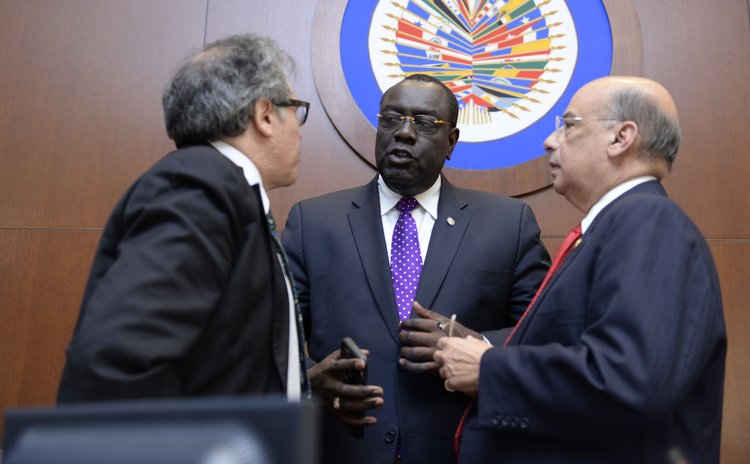 Strong disagreement may be brewing at the Organization of American States (OAS) on how to respond to the ongoing, grave political and constitutional crisis in Haiti.

Since January 2020, the Haitian President, Jovenel Moïse, has been ruling the country by decree without any legislative oversight. The mandates of the members of the Haitian Parliament, except for 10 of them, were terminated because elections were not held.

The rising tension in the country, including use of lethal force by the police against protestors, widespread kidnappings and killing, rape of women, and an arbitrary decision by Moïse to hold a controversial referendum on a new constitution, as well as heightened political contention, caused concerned member states at the OAS, including nine CARICOM countries, to sponsor a Resolution at the organization's Permanent Council to address the situation urgently.

Whether or not Almagro wrote to the Haitian President and "other major stakeholders" is unclear. Certainly, no major political party or human rights group in Haiti has confirmed receipt of any communication from him. There has also been silence from him to two official requests, asking for details of stakeholders to whom he might have written and when. There is no need for this – a straight answer is all that is required.

This matter will be mired in controversy, because while uncertainty prevails over whether or not the Secretary-General did write to the President and other major stakeholders in Haiti, a letter dated April 28 was sent to him by Claude Joseph in the latter's capacity as Minister of Foreign Affairs. The letter is significant.

First, it does not refer to any communication received from Almagro. Instead, it references the Permanent Council's Resolution of March 17 as the basis for writing. Second, it states that "the Government of the Republic of Haiti is willing to receive an OAS mission in support of the ongoing dialogue with all the nation's stakeholders with a view to concluding a political agreement that will facilitate the organization of the constitutional referendum and elections at all levels during the course of 2021".

On the second point, the OAS Resolution of 17 March did not offer its good offices "to facilitate the organization of the constitutional referendum". The proposed referendum is entirely of President Moïse's making and is mired in claims of unconstitutionality. The highly respected U.S. Congresswoman, Maxine Waters, describes it as "Moïse's most audacious and dangerous power grab". Legal experts inside and outside Haiti have opined that the existing Constitution specifically prohibits referenda to decide constitutional changes because a former dictator, Jean Claude 'Baby Doc' Duvalier, had used that artifice to proclaim himself President-for-Life. Therefore, if the OAS accepts that facilitation of the referendum is a condition of its good offices' role, its purpose and credibility are undermined even before it starts. No stakeholder would participate in any dialogue where organisation of a constitutional referendum is a condition.

It is important to recall that, prompted by the rapidly deteriorating democratic and human rights situation in Haiti, the offer of good offices by the Permanent Council resolution was "to facilitate a dialogue that would lead to free and fair elections". Nowhere did the Resolution venture to suggest that the OAS' role would include facilitating the organisation of a referendum to alter the constitution.

Particularly significant is that on April 26, two days before Joseph sent his letter to Almagro, 68 members of the U.S. Congress wrote to Secretary of State, Antony Blinken, pointing out that Moïse "lacks the credibility and legitimacy to oversee a constitutional referendum scheduled for June 2021, or to administer elections that are free and fair".

This position by such a large number of U.S. Congresspersons, led by Gregory W. Meeks, the Chair of the Foreign Affairs Committee of the House, is a remarkable development. It shows that important U.S. lawmakers are deeply concerned about what they describe as, "lack of preparedness of electoral institutions to hold elections, as well as the unconstitutional composition of the prevailing electoral council". Contrary to law, Moïse handpicked the members of the Council.

Of especial note is that the 68 U.S. Congresspersons urged Secretary Blinken to use the U.S. vote within the OAS "to ensure U.S. taxpayer dollars are not spent in support of this referendum".

Last year, the OAS and CARICOM, held all the parties in Guyana to account to deliver a credible result to the general elections held on March 2. It took five months of the active attention and diligence of CARICOM, the Commonwealth, the European Union and the OAS to ensure that democracy and the rule of law were upheld in Guyana, and that general and regional elections were not stolen by the incumbent government.

What is happening in Haiti now is no less egregious than what was resisted in Guyana in 2020 and is now being condemned in other member states of the OAS – and even in countries outside of it.

The OAS must act in the interest of Haiti and the Haitian people to uphold their rights to democratic governance, human rights, and the opportunity for economic development. The governing Charters of the OAS mandate it.

(The writer is Antigua and Barbuda's Ambassador to the United States and the Organization of American States. He is also a Senior Fellow at the Institute of Commonwealth Studies at the University of London and Massey College in the University of Toronto. The views expressed are entirely his own).