Two years after Erika, nature has been good at smoothing over her destruction of the village 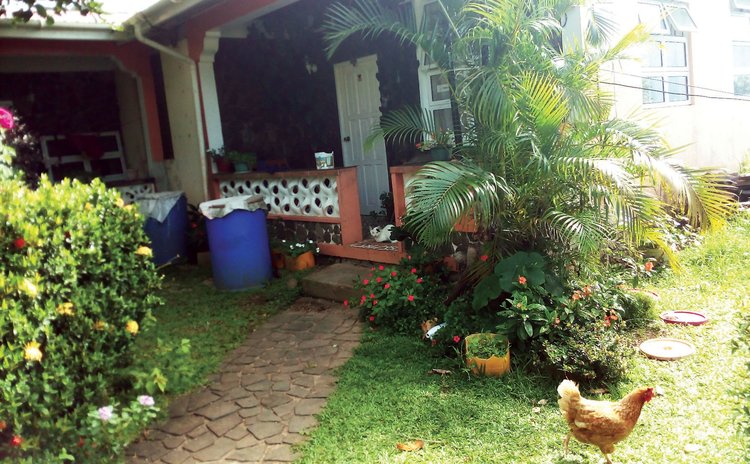 At first glance, Petite Savanne appears to be a picturesque country village set against a backdrop of lush green mountains and skirted by the bright blue sea.

But, two years ago, Mother Nature spared none of her fury as she stormed through the village unleashing death and destruction on August 27, 2015.

In the wake of overwhelming devastation, the Government evacuated the village and, acting on experts' advice, declared it uninhabitable.

Driving through the village two years later on a sunny morning, it's hard to believe that anything bad ever happened there.

Nature has been good at smoothing over her destruction with foliage, though she has not yet covered all the evidence of the landslides from the mountains.

Today, the mountains loom silently above the village, a constant reminder of the tragedy that happened there.

This does not deter a growing number of villagers though. Some never left; others opted to return rather than relocate. And others visit regularly while living elsewhere.

The village itself is largely peaceful.

Occasionally, a voice drifts upward, breaking the stillness of the day.

The brightly coloured concrete school building is vacant, leaving the instructive voices of teachers and the chatter and laughter of children to one's imagination.

At first glance, there is no one to be seen in Petite Savanne,

But there are signs of human life — a freshly washed pair of white socks left on a line to dry; a mop leaning casually against the wall of a house; a goat tethered at the side of the road; a plump cat sitting on a porch, staring idly at the road.

Soon, a woman with a pink head scarf is spotted sitting just off the roadside. She is de-shelling dried coconuts, explaining her plans to make oil to fry breadfruit, which is in season.

She is among about 50 residents who still call Petite Savanne home.

Last year, the number of persons living there was estimated at about 20, but more people are trickling back.

In the absence of public utilities, villagers improvise. One householder said that from shortly after the tragedy he has gotten electricity from a generator in the village that supplies several homes.

He rears goats and fowls and plants bay, makes bush rum and has a number of fruits and vegetables planted on the land his grandfather left for him.

He does not intend to give it up. "Leave it and go then?" he asked rhetorically.

Answering his own question, he declares it would be "like a curse" if he abandoned his family's land.

He recalls the night when the police and fire department arrived on the scene shortly after the devastation. The officers were disheveled and confused, many without rope or flashlight, he recounted.

They did not know the terrain and had no idea where to go. He served as their guide, even allowing his boat to be used to help evacuate villagers.

Asked whether the rain brings back bad memories, the villager replied that, on the contrary, "It's nice when it rains here. You sleep like a baby."

Another man said his brother, sister-in-law, two nieces and a nephew all died on that fateful day. He left the village for three weeks but returned to take care of his parents' property.

By planting vegetables, provisions, fruits and bay-leaf plants, he has a livelihood in the village that he thinks is quite satisfactory.

For entertainment, he, like many others, goes to a shop that sells groceries, soft drinks and alcohol to play dominoes or cards.

Monell Thomas said he returned to Petite Savanne after a year. "I came to play my part in re-developing it," he declared.

He explained that some villagers have decided not to abandon the village and try instead to put it back together again.

Evidence of these efforts can be seen on the main road that the villagers have been patching to keep it motorable.

They also plan to replace a wooden bridge with a concrete one by self-help and they have already acquired cement for this project. They cleared road to the cemetery over the last year.

Other signs of development include a water system residents set up by self-help. It takes underground spring water to their homes via a network of pipelines.

Others have access to underground water sources and also gather rain water in containers and small reservoirs.

Sometimes the villagers travel to Roseau for groceries. But fresh bread is delivered daily to Petite Savanne and fishmongers frequent the village.

Villagers believe trade will increase when the government fixes the road connecting the village to neighbouring Delices.

The road was damaged by Erika and Delices residents were forced to take the long route to Roseau instead of passing through the Petite Savanne Road, which was blocked.

Meanwhile, work is ongoing to resettle the residents of Petite Savanne on over 46 acres of land at Belle Vue.