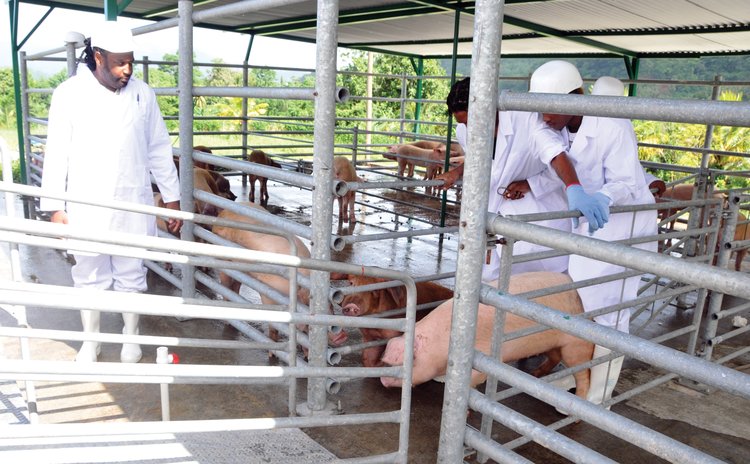 Though still in the testing phase, the Layou Valley Abattoir is hoping to enhance the quality of meat products in Dominica.

Although not officially opened, government officials and media personnel received a tour on November 25 and witnessed the slaughtering process of the chickens and pigs.

Funded by the Government of the Bolivarian Republic of Venezuela the facility costs ten million dollars.

The abattoir will operate in a testing phase until December 3 and by then butchers would have received sufficient training.

During the testing phase 4000 chickens and 250 pigs will be slaughtered.

There are currently twelve employees and two trainers on the compound.

At the tour of the abattoir Chief Veterinary Officer Dr Reginald Thomas stated that the abattoir will enhance production of livestock and also ensure safety of the products.

"It enhances food safety because before the abattoir slaughtering was done in a backyard arrangement and in terms of ensuring that there is no contamination or possible transmission of diseases that will be eliminated in the abattoir," said Dr Thomas.

He also noted that the abattoir will reduce the dependence of imported meat.

"Reducing the dependence of imported meat, imported protein is important to us so we value the expansion of the sub sector but importantly the food safety component," he said.

Meanwhile, Minister of Agriculture and Fisheries Johnson Drigo has encouraged persons to support the abattoir by buying the pork and poultry products.

"The success of this abattoir depends on Dominicans buying local we are presenting you with a wholesome local product, our very own chicken and pork product for the sake of the abattoir let us buy local," Drigo stated.

He stated that over the years the government have been promoting the opening of the abattoir as one the pillar projects for transforming the agricultural sector.

Drigo added that the time has come when the livestock farmers can now expand production.

He said Government remains committed to provide funding to livestock farmers to expand production through financing made available at the Agricultural Industrial and Development (AID) Bank.

He said several supermarkets have decided to purchase products from the abattoir through its testing phases.

"So very soon you will be able to purchase at the supermarkets pork and poultry products coming from your local abattoir at a very competitive price," said Drigo.

Drigo noted that operation of the abattoir will be a costly venture.

He said that the cost of electricity, salaries and wages for employees, cost of production of animals and the cost of feed all have to be considered.

He said the abattoir will be officially open by January 2016.