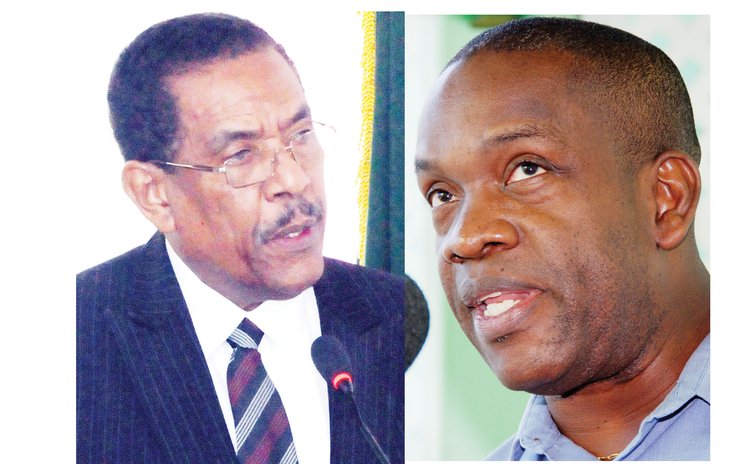 The depiction was biting and demonstrative of the reluctance of independent thinkers to swallow the address to the nation by the president, Charles Savarin, on 22 February, regarding the public meeting held by the United Workers Party (UWP) two weeks earlier, and the disturbance later that night.

"It was tasteless. Raw and tasteless. It made you want to vomit when you read it," one person told The Sun after having recently read a transcript.

In his address, Savarin all but accused the UWP of being responsible for the rioting on the night of 7 February, by linking the disturbance to the meeting, which was held to protest against the manner in which the sale and distribution of Dominican passports, including diplomatic passports, were being handled by the Roosevelt Skerrit administration.

Having listed the laws that make provision for the preservation of defence, public order and public safety, and agreements said to be reached between the UWP and police on the day before the meeting, Savarin stated: "It is therefore for the police and ultimately the courts to determine whether the terms and conditions agreed upon for the holding of the meeting were adhered to and whether the rioting, looting, burning and malicious damage to property which took place later that evening were as a result of a failure to respect these conditions, including the content of speeches at that meeting and the failure to respect the deadline for bringing the meeting to a peaceful conclusion."

The president also made light of the substantive issues raised by the opposition regarding the Citizenship by Investment Programme, stating those were matters best dealt with "in the parliament, in the courts, or through legitimate political action as the case may be".

The address is being seen by a former top public servant who served several administrations with distinction, as lacking the dignity and class worthy of the highest office.

"Charles Savarin's address to the nation reflects a careless departure from the norms of political neutrality sought to be established during the tenure of Clarence Seignoret, Crispin Sorhaindo, Vernon Shaw, Nicholas Liverpool and Eliud Williams(however short) over three decades.

"Recklessly, it borders on involving the office of president of Dominica in raw and tasteless partisan political controversy. This is very regrettable. But, perhaps, it is an inevitable consequence of the lack of the public service experience (national and/or regional) and high professional training that these gentlemen brought to the office of president over those years," that retired public servant observed.

"Undoubtedly, as one of his conventional duties a president has the right to warn. But the warning must be one which the general population would widely accept as being necessary and desirable, and thus deserving their support. Charles Savarin's address falls grossly deficient, short of length, in that regard."

The address angered the UWP, which in a letter to Savarin dated 9 March described it as "untimely and highly partisan" and giving comfort to Skerrit and unnamed police officers "in their false claim that a coup was plotted against the sitting government".

UWP leader Lennox Linton has been involved in an exchange of unsavoury letters with the president as he pushes for Skerrit's removal for "the deception practised on the citizenry" of Dominica "and the disgrace it has brought to the image of Dominica around the world.

Linton did not escape criticism from the former public servant, who said the opposition leader needed proper legal advice.

"Lennox Linton must seriously engage learned counsel of considerable experience before he tenders such half-baked, or ill thought out advice to the president, and generally. The functions of a ceremonial president are prescribed by the constitution. It is thought that the president cannot remove the prime minister from office under section 59 of the constitution or otherwise, under the circumstances presented by Lennox Linton."

In a dismissive response by letter dated 27 March, Savarin asked Linton to state the relevant law or constitutional provision under which Skerrit should be removed from office. Linton fired back in a letter dated 6 April, telling Savarin he ought to know because he did it before, in 1979, when he engineered the removal of then prime minister Patrick John from office.

"As someone who, back in 1979, saw the then Prime Minister as 'dangerous to the country and dangerous to the region as a whole' for far less than the grave leadership misdemeanours that the current prime minister is involved in, we are sure you appreciate the necessity of decisive presidential action, even if it means invoking the 'doctrine of necessity' to save Dominica from further destruction.

"Accordingly, having served as a key player in the 1979 change of government, it is incumbent on you to use that valuable experience in the noble cause of releasing the office of prime minister from the stranglehold of corruption, incompetence and international disgrace," he wrote.