After Maria the risk of fatal vehicular accidents increases 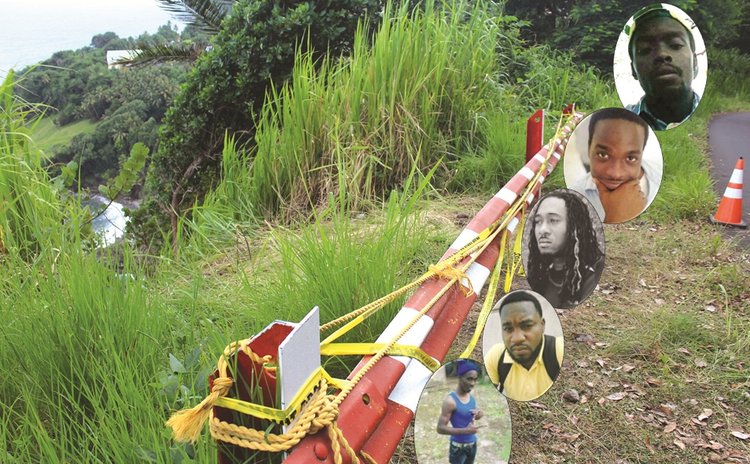 Men who died near the site of the accident

Last week we were reminded about how hazardous our roads are, and how more unsafe they have become since Hurricane Maria smashed much of our infrastructure, when a vehicle plunged down a cliff at Koubawi in St. Joseph killing the driver Jason Dominic Otis, an American citizen.

That vehicular accident should also remind us of the tragic mishap that took the lives of five young men last year when a vehicle plunged down a cliff in Abas in Vielle Case.

And who can ever forget the loss of two young men, national football coach Kirt Hector and footballer Noran Jno Hope who perished in an unfortunate road accident as they drove to Roseau to join the rest of the Dominica football team scheduled to participate in the revived Windward Islands Football tournament.

In the early morning of Friday 19th April 2013, Hector's vehicle plunged into a ravine because the road on which he was travelling had subsided due to heavy rains. The accident occurred on the section of the road at Pond Casse that leads to the Eastern District. Another footballer, Jocelyn Prince, survived the accident.

And we should always remember the many young men who frequently lose their lives, or their limbs, in numerous motorcycle accidents on our roads. Yet many young cyclists continue risking their lives by riding recklessly, without a modicum of protective gear.

Now more than ever, because our roads have become so precarious, we have to take steps to reduce the number of young persons who die on our roads. In Dominica and other countries vehicular accidents have become the major cause of death among young persons. For example: the Centres for Disease Control and Prevention (CDC) of the United States say that car accidents are the leading cause of death in teenagers in the US. In 2013, 2,163 teens aged 16-19 lost their lives in fatal motor vehicle collisions, with 243,243 teens receiving emergency treatment from injuries sustained in car accidents. While people aged 15-24 account for only 14% of the population in the United States, this age group accounts for 30% of the total costs of motor vehicle injuries in males and 28% of costs of motor vehicle injuries in females.

According to the CDC, there are several reasons why teenagers die in such large numbers in vehicular accidents. First teenagers have a lower level of situational awareness than more experienced drivers and have a tendency to fail to recognize hazards on the roads; they have a higher likelihood to exceed the speed limit, especially when other teenage passengers are present. Approximately 35% of drivers age 15-20 involved in fatal crashes in 2012 were speeding at the time of their collision; amongst all other groups, teenage drivers have the lowest reported percentage of seatbelt use. In 2013, only 55% of high school students claimed to always wear a seatbelt when driving or riding in a motor vehicle; and most importantly, approximately 17% of all teenage drivers involved in fatal motor vehicle accidents had a blood alcohol concentration (BAC) of 0.08% or higher. The risk of being involved in a motor vehicle crash is greater for teens than older drivers at all BAC levels.

Now, you ask, what do these accidents that we mentioned earlier have to do with road safety and how could we have prevented them. We are of the view that these accidents and many others could have been avoided if Dominican engineers observed basic safeguards in the construction of roads and bridges.

In fact, Severin McKenzie, a professional architect, came to that conclusion in an article entitled: Avoiding Destruction: Why so much damage? McKenzie suggested that the massive destruction that occurred during Hurricane Ophelia in 2011 was caused by obstructions of waterways, inadequate culverts, debris stuck under bridges and the construction of bridges without consideration for the free flow of water. In other words, the rains caused massive damage because of negligence and carelessness.

In fact, the number of fatal road accidents that has occurred in Dominica during the past few years and the dangerous driving that we experience on our roads every day has generated much discussion about the need for the more efficient implementation of the country's road safety regulations.

Road safety in Dominica, therefore, has to be seen as an important policy issue and government needs to prioritise measures to improve road safety when they make plans for the economic and social development.

As we stated earlier, given our low level of observance of basic safety standards, traffic accidents should be occurring here more regularly. Undoubtedly, there is few of what the experts call proper "street furniture" in Dominica. These include traffic lights and clearly marked pedestrian crossings and barriers. Dominica may be the only Caribbean country without a single traffic light. Additionally, there is no system of training, certification and re-certification driving instructors in Dominica. Anyone, it seems, who holds a valid driver's licence can perform the role of a driving tutor and conceivably may transfer his bad driving habits to his student.

In addition, regulations for the use of safety devices such as seat belts are not enforced and dangerous practices such as driving under the influence of drugs and alcohol seem to have become the norm.

Then, there is the poor condition of our roads. These roads are generally extremely narrow and are constructed with regular hair-pin bends and blind corners. Though road safety experts believe that road conditions are not the major causes of accidents, our roads surfaces do not inspire confidence in our road users, and that increases the risk of accidents.