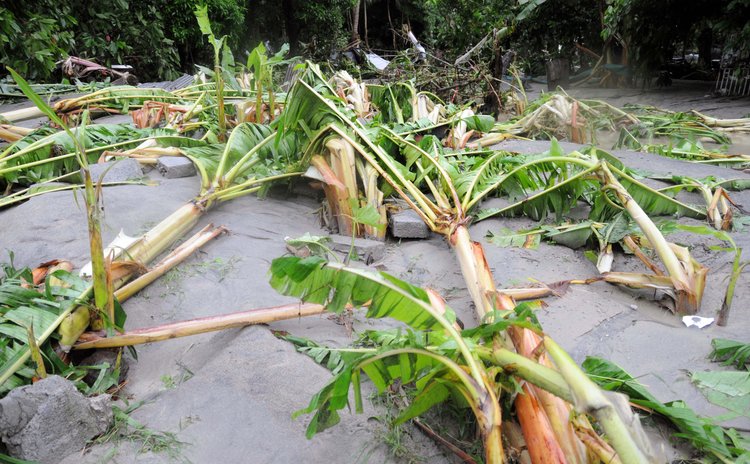 The agriculture and fisheries sectors have been hard-hit by Tropical Storm Erika with losses in crops, livestock and fisheries estimated at millions of dollars.

These figures do not include the cost of infrastructural damages in the agricultural sector.

Prime Minister Roosevelt Skerrit told the nation on September 29 that there were also losses in agro-processing operations. They included the Dominica Essential Oils and Spices Cooperative's bay oil distillery in Petite Savanne, which was destroyed along with the community's bay leaf crop.

Further, the Machoucherie rum distillery suffered a major blow with the destruction of 50 acres of sugar cane and other food crops. The rum factory -- including, warehouse, bottling plant, machinery, tools and equipment -- were inundated by flood waters, mud and debris from the Macoucherie river.

The damages at the rum distillery are estimated at $4.9M.

Skerrit said the Machoucherie Estate employed many residents of neighbouring communities and Haitians, some of whom resided and farmed there.

Dominica Coconut Products – which he described as a major exporter and earner of foreign exchange -- suffered significant damage which the Prime Minister said will no doubt have a major impact on the economy.

Skerrit said the homes of agricultural operators were damaged, farm vehicles were destroyed or damaged and small scale rural based cottage industries and agri-businesses were terminated.

In some cases, losses were sustained in both livelihood assets and households, Skerrit said, adding that such persons represent the most vulnerable group for consideration in the recovery process.

Reports from hucksters indicate losses due to the temporary inability to transport fresh produce to ports for export.

Livestock producers with animals ready for slaughter were faced with the problem of moving their product to markets.

Vendors involved in the sale of fresh produce and fish also suffered loss of products on hand and temporary unavailability of facilities for vending, the Prime Minister said.

Farmlands in all agricultural regions were subject to high levels of precipitation, resulting in loss of farmland due to landslides in some areas. In such areas, there is still a high risk of landslides despite which landholders continue farming activities on adjacent lands.

Skerrit said farmlands were also subject to high levels of leeching and soil erosion and the consequent reduction in soil fertility.

In relation to farm access roads, the Prime Minister said that, in addition to damage to primary roads estimated at $624.7M, farmers also have to contend with damage and destruction of feeder roads and farm access roads, some of which have been rendered impassible by fallen trees, landslides and erosion.

The storm's impact on tree crops, banana, plantain, root crops and vegetable cultivations-- principally as a result of flooding and landslide-- was severe, he noted.

Livestock farmers in several areas are also faced with farm access road problems which are hampering the provision, feed and water for livestock.

He noted that 149 fisher folk and one fishing cooperative reported losses and damage to equipment as a result of Erika while 270 fish pots, 100 fishing boats and 97 engines were lost.

Damage to nine boat sheds and substantial loss of fishing gear and equipment was reported.

Aquaculture farms sustained damage by flooding from nearby rivers.

Rivers were left with tons of silt, mud and debris along river beds, the Prime Minister said, noting that this does not augur well for river life and coastal fisheries, he said.

However, a complete assessment to the forests has not been done.