AirAsia plane with 162 people on board loses contact in Indonesia 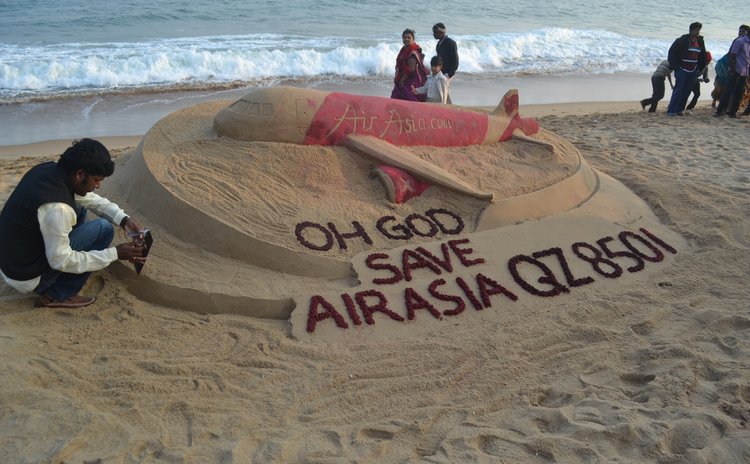 JAKARTA/KUALA LUMPUR, Dec. 28 (Xinhua/Sun) -- The air searching for a missing AirAsia plane suspended on Monday evening due to darkness in the waters near the Bangka Belitung islands and will resume early Monday morning, the Indonesian National Search and Rescue Agency said.

Planes and helicopters in charge of the search suspended their operation at around 5:00 p.m. local time at nightfall and returned to their base, Ahmad Toha, staff at the Indonesian National Search and Rescue Agency, told Xinhua in a phone interview, adding that the operation will be resumed on 6:00 am local time Monday morning.

A search and rescue operation was launched Sunday involving Indonesia, Singapore and Malaysia near Bangka Belitung islands in the Java Sea over which the jetliner lost contact with ground traffic control.

Ahmad added that the National Search and Rescue Agency have informed all ships passing by the Bangka Belitung islands to report immediately when they found any traces of the missing plane.

The Airbus A320-200 was on the submitted flight plan route when it lost contact with the air traffic control about 42 minutes after its takeoff at 5:35 a.m. local time (2235 GMT Saturday) from Surabaya in Indonesia's East Java province. It is scheduled to land at 8:30 a.m. local time in Singapore. (0030 GMT).

There were 155 passengers and seven crew members on board the plane, including 16 children and an infant.

Director General of Air Transport of Indonesian Transport Ministry Djoko Murjatmodjo told a press conference at the Jakarta airport that the plane went missing after the pilot requested to divert from its route because of cloud, and raise the height of the flight from 32,000 feet (9,700 meters) to 34,000 feet (10,303 meters).

Djoko said the aircraft, which sent no distress signal, must have run out its fuel if it kept flying. But he did not say whether the plane had crashed or had an accident. "We don't dare to presume what has happened except that it has lost contact," he said.

AirAsia also confirmed that the pilot of Flight QZ8501 had requested "deviation" from its flight plan because of bad weather.

"Communication with the aircraft was lost while it was still under the control of the Indonesian Air Traffic Control," it added.

AirAsia Indonesia later said the passengers include one Singaporean, one Malaysian, three South Koreans, one Briton and 149 Indonesians. The crew include one French and six Indonesians.

The Civil Aviation Authority of Singapore confirmed that the only Singaporean national onboard the missing flight was a two- year-old girl.

"She was traveling with her father, a British national. We had earlier in the day made contact with the girl's mother and grandparents, who were at the relatives holding area, and provided them all necessary support," the authority said.

Dozens of relatives of passengers aboard the plane traveled to Surabaya airport to await word about their loved ones on Sunday afternoon.

AirAsia group CEO Tony Fernandes also flew to Surabaya on Sunday afternoon and said at a press conference there that the focus now should be on the search and the families.

Fernandez said on Sunday that the firm would let Indonesian agencies lead the search for its plane QZ8501 and would not make any speculation on the missing of the jet.

He noted that the missing Airbus A320-200 plane was produced in 2008, in good condition as it had undergone maintenance program periodically.

Besides, the pilot in command of the plane was a very experienced one who has a total of 6,100 flying hours.

"Now we let the searching efforts to Indonesian agencies. We do not want to make any speculation. Let's find the plane first," Fernandez said in a joint conference televised nationwide, attended by the airport administrator Trikora Harjo, East Java Governor Soekarwo and Ermanto from National Search and Rescue agency (Basarnas).

Fernandez said that should anything bad happen to the plane, the Malaysia-based firm had prepared to fulfill its obligation to the passengers, including insurance compensation.

Fernandez added that it was the first case faced by the firm which is well known for its budget flight service.

Ermanto said that the Basarnas has dispatched seven vessels soon after it received news about the missing AirAsia jet. Planes and helicopters from the Air Forces had also being dispatched to search for the missing plane that lost contact in waters between Tanjung Pandan, Bangka Belitung regency and Pontianak, West Kalimantan province.

He added that seven vessels from the Navy were now heading to the location to comb the areas where the plane made last contact with Indonesian Air Traffic Control (ATC).

He added that Singapore and Malaysia had offered assistance to search for the missing plane.

Earlier, there were reports that the wreckage of the missing AirAsia plane had been discovered, but it was soon denied by Malaysian Transport Minister Liow Tiong Lai, who told a press conference in Kuala Lumpur nearly 12 hours after the Singapore- bound jet took off from Surabaya.

Liow said Malaysia had deployed three vessels and one aircraft to assist in the search operations at the request from the Indonesian side. A Rescue Coordination Center (RCC) at the Kuala Lumpur Traffic Control Center (ATCC) in Subang has been set up to assist with the coordination efforts.

AirAsia, a low-cost carrier, has dominated cheap traveling in the region for years with about 100 destinations and affiliate companies in several Asian countries.