AirAsia plane with 162 people on board missing in Indonesia, search underway 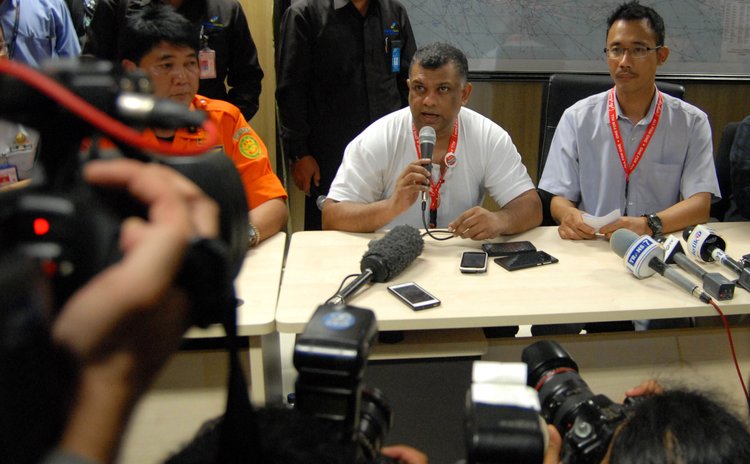 JAKARTA/KUALA LUMPUR, Dec. 28 (Xinhua/Sun) -- An AirAsia passenger plane with 162 people aboard lost contact with the air traffic control on Sunday soon after taking off from Surabaya in Indonesia 's East Java province.

"At the present time we unfortunately have no further information regarding the status of the passengers and crew members on board, but we will keep all parties informed as more information becomes available," the Malaysia-based budget airline said.

There were 155 passengers and seven crew members on board the Airbus A320-200 aircraft, including 16 children and an infant, the airline said in a statement.

The passengers and crew members include one Singaporean, one Malaysian, one French, three South Koreans and 156 Indonesians.

The plane had undergone its last scheduled maintenance on Nov. 16, it added.

Director General of Air Transport of Indonesian Transport Ministry Djoko Murjatmodjo told a press conference at the Jakarta airport that the plane went missing after the pilot requested to divert from its route because of cloud, and raise the height of the flight from 32,000 feet (9,700 meters) to 34,000 feet (10,303 meters).

The director said the airliner went missing in the Java Sea between Tanjung Pandan of Bangka Balitung province and Pontianak city of West Kalimantan province.

Djoko said the aircraft, which sent no distress signal, must have run out its fuel if it kept flying.

AirAsia also confirmed that the pilot of Flight QZ8501 had requested "deviation" from its flight plan because of bad weather.

"The aircraft ... was requesting deviation due to en route weather," the Malaysia-based carrier said.

"Communication with the aircraft was lost while it was still under the control of the Indonesian Air Traffic Control," it added.

The Singapore air force and the navy also were searching with two C-130 planes.

"I haven't received much information at this time and I can only confirm that the plane is missing," he said.

The incident came at the end of a disastrous year for the Malaysian aviation. Malaysia Airlines Flight MH370, a Boeing 777, with 239 people on board, disappeared on March 8 after diverting from its Kuala Lumpur-Beijing course. No trace of the jetliner has been found despite massive search efforts.

Months later, MH17, also a Boeing 777, went down on July 17 in the war-born eastern Ukraine enroute from Amsterdam to Kuala Lumpur, killing all 298 aboard.

AirAsia, a low-cost carrier, has dominated cheap traveling in the region for years.