Akil Richards: Soaring Despite the Storms 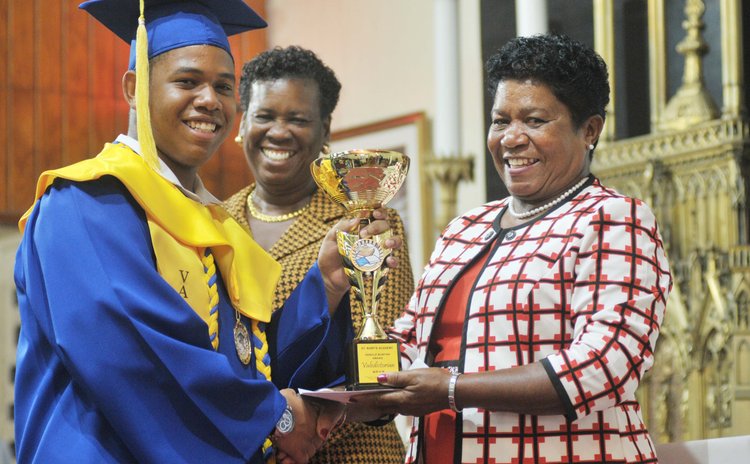 But none resonated as much as the speech by Akil Richards, the valedictorian from the Saint Mary's Academy (SMA).

It was simple, touching, honest, wise way beyond his years.

Richards said at the outset that he was not smarter than all the rest; quoting Albert Einstein he said: "It's not that I'm smart, it's just that I stay with problems longer."

Yeah, like being smart enough to know you have to stay absolutely focused for five years on the problems of secondary school life.

But Richards admits that he had help from his peers, his teachers and his parents. He remembered when he entered the famous walls of the SMA for the first time in September 2014.

"My palms were sweating more than usual; I was a little scared and unsure maybe not about my academics as much as being accepted by my peers, finding friends who I would have similar interests with and teachers dedicated to their students, their profession, a vocation and not just a job," he said.

During these five years, the SMA underwent a difficult period; there were four principals but Richards said he missed Principal Elwin most.

"Personally, I miss Mr. Elwin who kept encouraging me as a first former as I prepared for my first competition for SMA. I doubt I would have been as confident without his belief in my abilities and constant encouragement," Richards said. Richards said many teachers went beyond the call of duty to assist him and this peers. These included Ms. Paul who travelled every day to the countryside and was caring for her ailing mother during that period.

"Mademoiselle, merci beaucoup je ne t'oublierai jamais, au revoir a la prochaine fois!," said Richards. He added: "Many of our teachers not only prepared us for CSEC, but also prepared us for life. They sacrificed for us though they sometimes were suffering themselves and to be honest, our teachers worked us so hard that we had no time to feel sorry for ourselves. Teachers, on behalf of the graduating class, I say thank you!"

But Richards believes that members of his family were paramount in his success and happiness.

"I would like to extend my most profound gratitude to my parents Anthony and Karlene Richards- I know I am only manifesting the seeds that you have planted in me throughout my formative years," he said.

Richards continued: "I hope one day that my children say I am the kind of father that my father has always been to me. In all of my sixteen years my father has never missed a first day of school; he has dropped me to every extra class no matter how far and would even sleep in the parked vehicle outside waiting till my class is over.

"My father is a man of action and few words, my mum on the other hand is a woman of both actions and words! She is strict and not to be messed with but her love is real and evident in every moment of my life. Mum I would like to say thank you for staying up with me no matter what time and for editing and organizing my work even while I slept and most importantly for praying over me.

"As I worked on this speech my sister Kyra kept jokingly stressing to me to remember to say that I am your best friend but what she doesn't realize is that she really is my best friend and my confidante and a role model which I look to for advice and help any time I need it".

(The theme of the SMA 2019 Graduation Class was "Soaring despite the storms").