Alick Lazare: I wanted Dominica's story to be told in the voice of her people 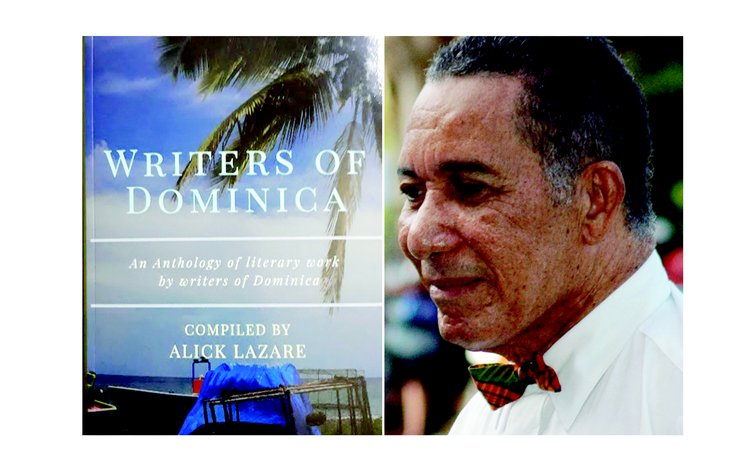 One of Dominica's veteran authors has released a new book, this time highlighting the literary contribution of other Dominican writers.

"Writers of Dominica: An Anthology of Literary Works by Writers of Dominica" was compiled by Alick Lazare who has several other literary works to his name. This anthology focuses on reading material produced by Dominican writers from 1920 – 2020.

Lazare told The Sun, his main reason for compiling these works is for Dominica to share its story through the voice, perspective, and experience of its people.

"Prior to the 1920's, there were several writers who wrote about Dominica, in a very critical, insulting, unfair manner, which, I feel, intellectuals on island should have challenged but they did not. Those works are still around and are being read," Lazare said. "Therefore, I felt it was important that our views of ourselves be heard so that people understand Dominican society."

Over the 100-year span covered in the anthropology, Lazare says there has been a marked progression of the writing style and content of authors. This most recent literary contribution of his features generational groupings including notable names like Jean Rhys, Phyllis Shand Allfrey, Father Clement Jolly, Raglan Riviere, and, among the youngest, Michelle Belle.

"The evolution of our society makes a vast difference in the literature that has developed over the past century. For example, in the early days the more educated mostly white people had that privilege to write. And they wrote from their Perspective," Lazare added.

The author pointed out the significant shift in literary content became more obvious in the post-colonial era as Dominicans across the spectrum were able to express themselves, through prose, poetry, and song.

"What you had starting was a particular view of Dominican society as the society built up and became more confident in itself," he said. "Also, E.O LeBlanc influenced the country's literature by providing opportunities for every strata of Dominican society to express itself."

The written word then took on another tone as a radical era entered the picture, adding another voice to societal developments with the Black Power Movement and the Rastafarian movement.

"But society has gotten more stable and I think people are looking at the world around them and are confident enough to describe things rather than protest about things," the author said.

Lazare, who enjoys the research part for any literary project he undertakes, shared with The Sun that for the anthology the research aspect was most challenging.

Using resources from his library, the Public Library, and the internet, Lazare had to select the writers, obtain the literature, select excerpts, and research author biographies.

"I also had to get copyright permission from the publishers or estate administrators. In the case of Jean Rhys - published by a British company with a branch in the United States – it was a rigmarole to get a helpful response from the publisher because we were in the pandemic, so instead of using an excerpt, I did a critical review of one of her works. And there were other instances like that," he said.

He added: "Some authors are not featured [in the anthology] because I could not get copies of their publications in time, but the names are there and anyone who is interested can pick up from where I left off to research those names and continue with the the purpose that I started."

He commends Irving Andre for beginning the process with his book titled Distant Voices and hopes that someone will continue this important work to introduce the more than 250 Dominican authors so far identified, only 44 of whom could be included in this present work.

Alick Lazare is also in the process of republishing, as second editions, his books "Pharcell" and "Kalinago Blood", both of which can be found on Amazon.com