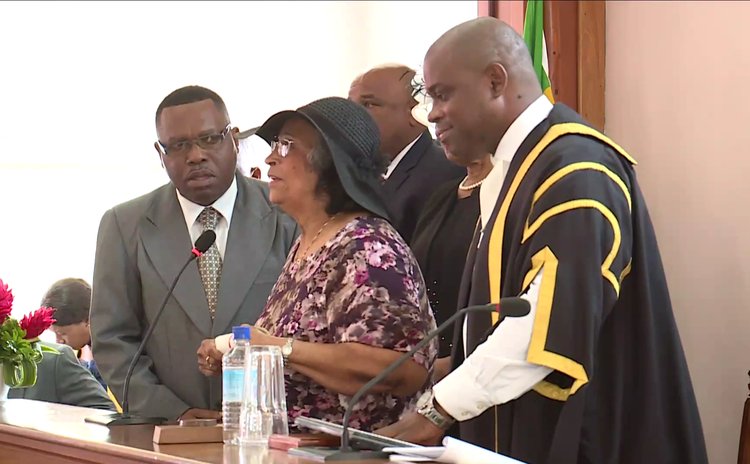 Almost overwhelmed with emotion as she addressed parliament last week, probably for the last time, Alix Boyd-Knights accepted the title of Speaker Emeritus, as proposed by parliamentarians of the Dominica Labour Party (DLP).

"I think for the first time in my life I am being overcome by emotion," said Boyd-Knights, the out-going Speaker of the House of Assembly who sat in the Speaker's chair for almost 20 years.

"I am grateful to the Honourable Prime Minister, members of the government side, all those persons who have met me, Whatsapped me, phoned me, I will always be Madame Speaker. So Government has formalised what everybody who met me has been telling me...

She added: "I am at a crossroads in my life and I am not sure which one to follow. But I can assure everyone because I like to cook, I still like to write, I still like to teach and I have some knowledge that if anybody calls on me I'll be only too happy to pass it on. God has been good to me. Everything that has happened to me in my life is from God." Throughout the period that she sat in the Speaker's chair, Boyd-Knights was accused by the opposition United Workers Party (UWP) as being overtly biased. But she constantly denied the charge.

"The fact that she has won every single case brought against her, both at first instance and at Appeal level, has convinced her that she is working properly within the Standing Orders despite her critics' claims that she is biased," writes Dr. Lennox Honychurch in the book : "Women in Parliament in Dominica" that he co-authored with Boyd-Knights.

She has a Bachelor of Laws degree from University of the West Indies.

Other female Speakers of the House of Assembly were: Marie Davis-Pierre and Neva Edwards.