All about that brass 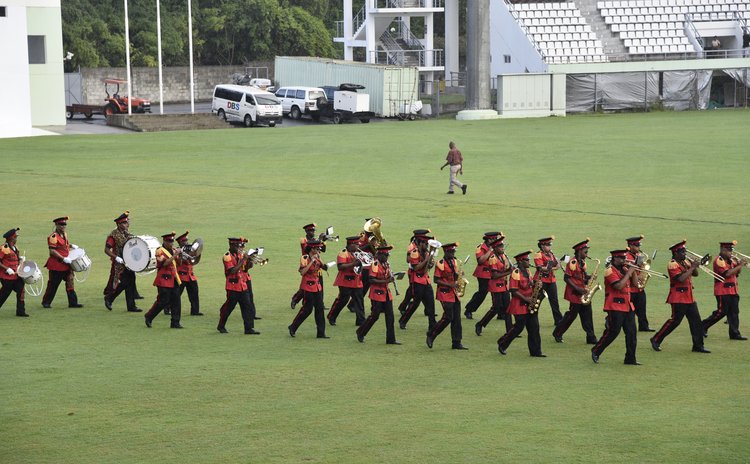 What would Christmas be without those uniquely Dominican traditions that let us know. . .'tis the season to be jolly?

And one of the most endearing traditions is all about that brass — that is, the sweet soaring sound of the Dominica Government Band (DGB) in full musical flow.

Drum rolls; clashing cymbals; distinctive brass crescendos; magnificent uniforms; precise marching— all these have become synonymous with Christmas, largely because of the DGB.

This year is no different. The band is already on the move upholding its tradition of taking Christmas music to far-flung communities to kindle the Christmas spirit far and wide.

Bandmaster, Valena Letang said the band's annual tour to spread Christmas cheer in outlying communities starts on the first Sunday of every December.

Letang, who has been with the band since 1983, said this year the band had a special mission — to ignite Christmas cheer among the disadvantaged, especially those affected by Tropical Storm Erika at Bagatelle/Fond St Jean, Grand Bay, Colihaut and Coulibistrie, as well as Dominica State Prison, Roseau Infirmary and Princess Margaret Hospital.

The band's grand finale this year is a performance at the Kairi Nature Isle Christmas Wonderland site at the Botanical Gardens in Roseau.

"We usually end up with the grand Christmas Musicale in Roseau…traditionally held a few days before Christmas…We try to give a bit of classical music, maybe a march or two. . ., Letang said.

This gala event is open to anyone who loves great orchestral music played by inspired musicians, and there are also specially invited guests.

Letang said the Christmas tours started from the formation of the band. In those days, roads were bad and spreading Christmas cheer meant traveling under adverse conditions to remote villages.

In a 1991 commemorative magazine, Ms Glenda Richards presented a study noting that the band had "maintained a very important link with the rural areas of the island from 1951."

"The band has conducted musical concerts in the villages, heralding the spirit and tempo of Christmas, especially to the outlying villages which were not served with electricity," she wrote.

Richards said the band tried to focus on touring a particular area each year, performing in as many villages as possible in that location.

She added that villagers eagerly anticipated the Christmas tours and turned out in large numbers to see the band's electrifying performances.

One of the early members of the band, Alfred Joseph reminisced on those days in 40th anniversary commemorative magazine. He recalled bandsmen travelling to outlying districts under difficult conditions— via tug-boats over sea, or on dump-trucks— to perform for villagers during the Christmas season. He said that the bandsmen were often drenched, but happily did what they set out to do.

Former Bandmaster and a founding member of the band, Hesketh Casimir spoke about the early days on the band's 40th anniversary in 1991.

He recalled that the decision to dissolve the DDF band by the Colonial Authorities had far-reaching repercussions, eventually resulting in the formation of the Music Lovers Band, Casimir said.

Ms Richards' presentation on the band noted that the DDF was often tasked with providing musical accompaniment at official functions.

"The need for a marching band was highlighted at the 1946 King's Birthday Parade at which an attempt was made to utilise gramophone records to provide martial music.

"The result was a fiasco because it lacked the pomp and splendor associated with such occasions," she said, and the public outcry for a military band led to the formation of Music Lovers Society Band.

She said their first performance was at the Queen's Birthday Parade on June 7, 1951.

In those days, members were expected to provide their own uniforms and fund-raising events helped members buy instruments.

In 1960, the band came under the ambit of the Government, hence its current name.

The band has also had its share of ups and downs, according to Alfred Joseph.

In his 40th anniversary message, Joseph recalled when a fire destroyed their band room leaving them with no permanent place for rehearsals and equipment storage.

Today, however, the band is accommodated at the police barracks, yet some members maintain that the band should have its own quarters.

Government provides the band with a stipend, instruments and uniforms.

Letang said the band has about 25 playing members from all walks of life.

One of biggest challenges is replacing good players when they leave the band, as often happens when young members leave to pursue their studies, Letang said.

"You lose your better players from time to time and you have to try to replace them. That's the difficult part for me…" she said.

However, the band plays on and is widely considered to be one of Dominica's most treasured musical institutions.

On the band's 60th anniversary, the late former President Nicholas Liverpool deemed the band as "an institution with a permanent responsibility"

He said it had "a mandate to sustain its legacy of producing quality music along professional lines geared towards continuing development of our cultural persona."