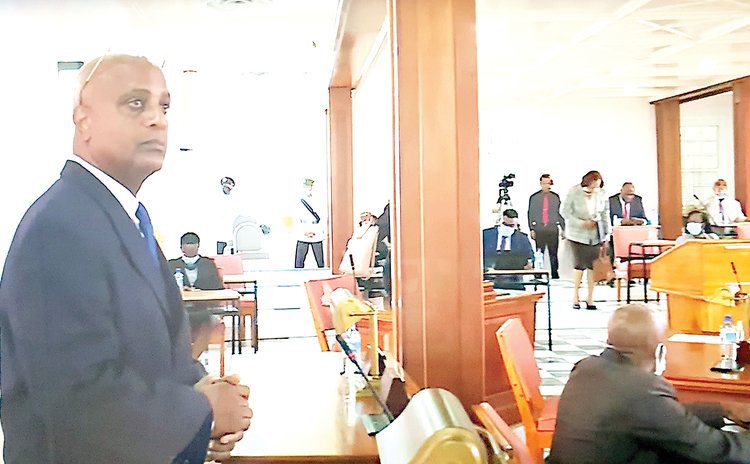 At the House of Assembly, Daniel Lugay

Daniel Lugay, the member of parliament for Roseau North, often contemplates life as a legislator and the treatment meted out to the opposition by both the government and the speaker of the house, and wonders what has happened to democracy in Dominica.

For four months last year, Lugay's salary was withheld after he was forcibly removed from a sitting of the house on 29 July for protesting the government's decision to limit the opposition leader, Lennox Linton's response to the budget presentation to 30 minutes, instead of the customary two hours – the same amount of time the prime minister was allowed to deliver the budget.

In addition to the infrequent meetings of parliament, this was just one of several instances in which the government, with the backing of the speaker, has either sort to curtail the opposition's contribution or simply refuse to answer opposition questions, according to Lugay, who has been a legislator for the past eleven years.

"At least the past 20 years we've had speakers who really put the hammer down on us in the sense that, every time we go in for debate you hear the speaker say, 'you imputed the improper motive,' or, 'we don't want to go down that lane,'" the Roseau North MP told The Sun last week, stressing that this behaviour began with Alix Boyd-Knights, the previous speaker, and continues with Joseph Isaac. Isaac is a former United Workers Party (UWP) parliamentarian, who switched allegiance to the Dominica Labour Party and contested the Roseau North seat against Lugay.

"They find a way to really not us have our say," Lugay complained.

The attempts to stifle the opposition, couple with the castration of important institutions such as the integrity in public office and electoral commissions, are signs of a country that's perilously close to an elected dictatorship, according to several observers.

Among them is Kent Vital, the chairman of the National Joint Action Movement (NJAM) - a pressure group that promotes democracy – who contended that the current government was not freely elected in the first place.

In addition, Vital charged, the administration has demonstrated that it's prepared to do whatever is necessary to remain in power.

It's a sentiment shared by a former senior public servant who spoke to The Sun on condition of anonymity because the person wanted to avoid the spotlight. While he did not agree that the country had reached the staged of an elected dictatorship, the former civil servant said the crippling of key institutions meant Dominica was dangerously close to the edge.

"The most glaring example is the electoral commission where the majority on that commission are people who do business with the government and will never do the right thing because they will not compromise their passport selling," he charged.

The term 'elective dictatorship' was coined by the former Conservative MP, Lord Hailsham, in October when he argued that the only limitations on the sovereignty of parliament are political and moral and can be found "in the consciences of members of parliament, in the necessity for periodical elections, and in the so-called checks and balances inherent in the composition, structure and practice of parliament itself."

At the time, Hailsham warned of an elected dictatorship due to, among other factors, parliament was increasingly being controlled by the executive and the opposition was gradually being reduced to impotence.

Since that Hailsham lecture more than four decades ago, the state of affairs has deteriorated further, with prime ministers acting in an increasingly presidential style and the hiring of a proliferation of special advisers, both of which are all too familiar in Dominica. What this shows is a manipulation and exploitation of the constitution by an unscrupulous government which does not subscribe to the "democratic spirit" of the constitution, charged Vital.

"We understand liberal democracy, one understands that it is meant to be a democracy and though the laws do give some strong powers to prime ministers, we do understand that there is a chance to change that every five years," stressed the NJAM chairman. "Many of us do understand that although the Prime Minister is given certain powers in the constitution, it can be checked."

The administration's perceived authoritarian tendency to govern by decree, along with a lack of transparency in everything from awarding of government contracts to the distribution of state-funded homes, is also a consequence of the political party system in a small jurisdiction, argued Bernard Wiltshire, the British trained lawyer and former attorney general.

"The problem arises where the party system makes loyalty to party much greater than loyalty to the country," Wiltshire told The Sun.

Signs of an elected dictatorship began emerging way back in 2009 when virtually everyone who contested the election for the DLP was appointed to the cabinet, claimed the former senior civil servant, who asked not to be named.

"That was not what the constitution envisaged," he told The Sun. "They are no longer just legislators, they are executives as well, every one of them. That was the beginning of that creep towards dictatorship."

The situation is no different today, as the cabinet consists of 18 ministers in a government that won 18 of the 21 seats in the last election.

It's a worrying development because the parliament is left without a backbench to challenge the executive, states Wiltshire.

"What you're talking about is that the executive has a majority over the parliament. In Dominica, you have 21 [MPs] and 18 of them are in the cabinet, so the cabinet controls the parliament completely. So there is no possible chance of the parliament ever being able to act independently of the cabinet," said Wiltshire. "That is what you call elective dictatorship."