All for the love of country 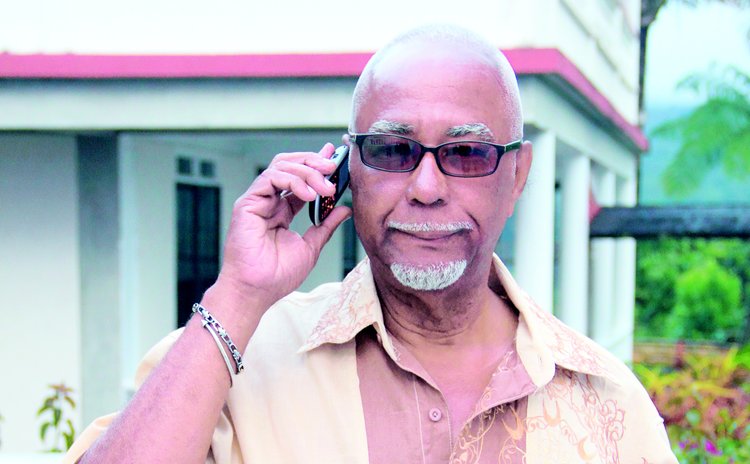 Some people are such an indelible part of the cityscape-- their niche in Roseau so firmly and prominently carved-- that it's hard not to know them.

Pass along King George V Street and you'll most likely see him at his headquarters Symes-Zee Enterprise -- a confident and striking grey-haired gentleman with a trim moustache, goatee and tinted, black-rimmed glasses.

Known as Timothy 'Symes-Zee', Tim Symes is a longstanding business operator in Roseau who continues to fight the rough waves that constantly roll in, bringing continuous challenges in harsh economic times. And he's rowing as hard as he can-- all for the love of country, he says. Background

Symes-Zee grew up on King George V Street back in the days when CG Phillip was the go-to place for shopping and the area now known as Bath Estate was still L. Rose & Co. lime estate.

Roseau was crowded and, back then, barrels of lime juice being carted to the Bayfront for shipping was not an uncommon sight.

He still remembers the post-World War II exodus of Dominicans to England.

"Everybody was leaving for England in the 50s and it was like a carnival when they left. Everybody went to see them go away by the Bay Front and the big ship would come…there was no deep water harbour or jetty in those days and they had to be rowed to the ship," he recalls.

Some persons even tried to tiptoe into England as stowaways but they often got caught.

"When they brought them back everybody was down by the port to see them," Symes-Zee recalls with a chuckle.

One of the main places of entertainment in those days was the Grand Saloon on King George V Street. There were not many vehicles around Roseau, but the city was bustling and the business climate was vibrant.

"Most of the boys who are qualified, well-known men now, were from my street… the town was filled with great boys.

"We played cricket at St Gerard's Hall, the People's Park and swam at 'under power' by the river . . . above it was the power station."

Born with a spirit for adventure, Symes-Zee longed to see the world and, while still a schoolboy, he traveled by sailboat to Martinique, Grenada, Petite Martinique and Trinidad.

Therefore, his parents were not surprised when, at the age of 19, he jumped at the opportunity to go to England on a 'banana boat' while he was working with the Dominica Banana Association.

"I always was a strong minded person. . . I could defend myself. They knew I was a strong guy, so they always had trust in me…"

Young and eager, he packed his bags and boarded the boat the same day he was asked.

The seas and channels were rough with the small boat riding towering waves. Nevertheless, the trip was incident-free and the passengers landed safely.

His standout memory is reaching The Azores. "The most fascinating thing I came across as a young man was The Azores…Up to this day I remember there."

After a month, he returned home and agreed to another trip.

Later, he worked at the Audit Department before leaving in 1965 for the US as he continued to explore the world.

US stint and return

As fate would have it, Symez-Zee ended up staying in New York for 21 years. A stint in the US army in the late 1960s took him to Holland, Belgium, France, England and Germany before he decided it was 'time up' for his soldiering days.

He remained in New York, but deep in his heart Dominica kept calling. His plan was to work to raise money to return and invest in his homeland.

Yet it was not all work in New York. His love of music influenced him to manage a band – 'Kosse A Bibi' until he founded his own band – 'High Power'.

He sponsored New York engagements for Swinging Stars and Exile One and he held a successful Dominica/New York Queen Show with a return trip to Dominica as the first prize! Symes-Zee also helped Dominicans to settle in to New York when they arrived.

Finally, Symes-Zee re-migrated to Dominica in 1986 and quickly set up a boutique in Roseau at 34 King George V Street.

He also started up a small bar, a grocery and a parlour with video games for kids-- the first ever in Dominica.

Possessing a wealth of knowledge about agricultural and ornamental plants, Symes-Zee turned his attention to planting vegetables after buying land at Giraudel.

Later, he bought a small country house at Biack. And what started out as simple repairs quickly grew into Symes-Zee's Villa, the gem of his enterprise.

Bit by bit, he expanded also his Roseau property. In time, the boutique and video games gave way to the hotel, restaurant and bar everyone knows today.

As a veteran local entrepreneur, Symes-Zee is outspoken about the state of business here and says one of the major problems is slow population growth.

Business is not vibrant and it takes tremendous sacrifices to keep going, says, adding that attitudes of persons in commerce-- from financiers to consumers-- are not business-friendly.

Furthermore, banks don't facilitate entrepreneurs because they're insensitive to prospective borrowers' needs, even those with adequate collateral or a good credit record.

These factors have retarded local businesses and crippled the entire business sector, he insists.

Despite the challenges, he continues to do his bit, contributing to the local business sector and remaining an indelible part of the cityscape.