All in the family: longtime jeweller welcomes his son to the business 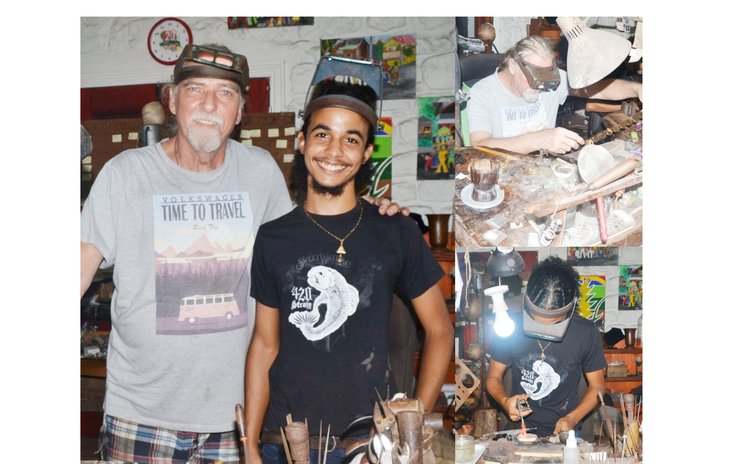 When jeweller Andreas 'Andy' Neubeck, started his business, 'The Coconut Express', in Dominica 27 years ago, he tells the Sun that he never imagined having a son, who would one day follow in his footsteps and carry on the tradition.

However, almost three decades later, the German national can't wipe the smile off his face working alongside his 18-year-old son Olaan Neubeck, who plans on one day inheriting the family business and passing it down to his children.

"I am extremely thankful that he chose this," Andy, who started in the field at the age of 15 told the Sun. "I have never pursued the idea to push my son into this. It's his choice because he's realized the potential of this business and he's also realized the potential within himself. He was born into it. In his mother's womb, he heard all the noises that happened outside. So he's well familiar."

Olaan who started learning from his father at the age of 12 says it is the creative aspect of jeweler-making which really drove his decision to become a jeweler.

"There are no limits when it comes to jeweller," he excitedly told the Sun. "I get to see and experience so many people, I get to do so many jobs for people working with stones, coal, silver, copper, anything, and it's amazing. The networking is awesome. Probably right now, I've done close to 1000 jobs. So it's thrilling to me."

Over the years, the family-run business has been able to excel by not only becoming more business savvy and adjusting to changes in consumer behaviour, but also by ensuring that customer satisfaction is top of the agenda.

"I have a lot of customers. If you look around Dominica, you will see many people that wear my jeweller, or that I repaired their jeweller. So I'm somewhat in demand," the father disclosed.

Despite the cost price tag which usually comes with owning a piece of the luxurious items -his most recent being a $4,500 custom-made diamond engagement ring- the business priority says that they typically get a new or returning customer for every event hosted in Dominica.

However, running a small family business does come with challenges which the Neubecks highlighted that they've not been able to escape from.

One, in particular, is dealing with impatient customers, who typically don't understand that creating such masterpieces is unpredictable and can sometimes take a lot of time.

Another major challenge which the duo stressed and is hoping can be addressed, is the importation cost of getting the needed to get the job done.

"Customs kills us when it's time to clear the products. The amount of money that is being charged on top of something like tools is outrageous," Andy says. "And it prevents small businesses really from expanding and prospering, so that is something that should be addressed."

Speaking on the name of his business, 'The Coconut Express' the jeweller revealed that the idea dawned on him during his first year in Dominica and nearly three decades later, holds a very sentimental value as some of their trademark products are made from coconut.

"I had an injury in my foot and I couldn't move too much, so back then I sat in my hammock a lot. I used my pocket knife, a little fire, a couple of other little tools and made coconut rings and other jeweller out of coconut shells", he said. "So it only seemed natural that this should be the name of the business." As to the future of the coconut express, the family is completing their home which they say will also serve as the base for their store.

Also on Olaan's agenda is the expansion in the range of products offered by their business.

His father also has similar ideas about the cutting of stones which he believes can advance Dominica's tourism industry.

"We have the red jasper which we also incorporate into our jewellry and various other treasured gemstones here in Dominic and we believe that it's time that the government takes advantage of these treasured goods," the German-national stated. "However, we are going to expand on it, that is our goal. we're going to get away from our hobby equipment, and go for a little bit more professional equipment with stone cutting."

Andy who has passed on his knowledge to several young individuals, two of which have gone on to open their own jewelry store in Dominica; also has his eyes set on one day opening a school or a training centre to teach and hone the skills of more young men and women who wish to join the field.