ALPHONSO "BÉDO" ETIENNE: Was Solid As A Rock! 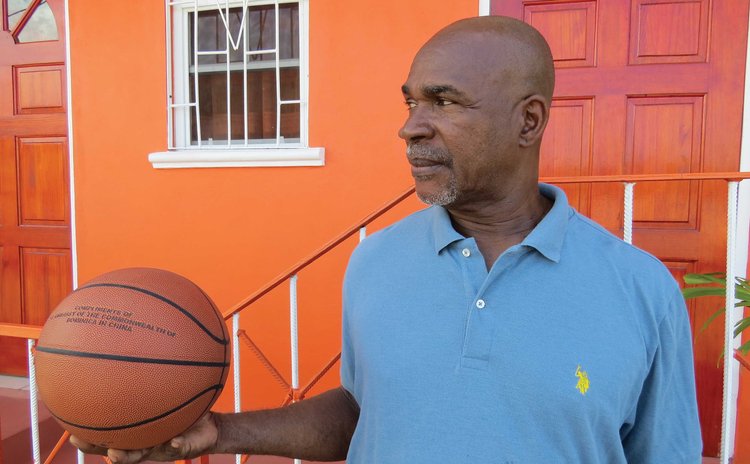 You enter his bar to purchase a cold beverage, a slab of steamed fish, a rotisserie chicken or a lunch, and for a moment you'd think that you have just stepped into a room of a mini-museum. (

Apart from a table with dominos, other items in that bar include an old, table-top, hand-operated sewing machine, a couple of long retired musical instruments, and a large, locally-crafted screw-pine mat. Several locally-produced paintings hang on the wall, while driftwood, local, hand-crafted leather sandals, and a few interestingly shaped bottles add diversity to the collection.

A basketball rests atop a shelf, and mounted on the walls are a newspaper clipping and several laminated or framed photographs. The latter feature the Cardinals, "original" Raiders and Flames, as well as some of Dominica's National Basketball Teams from the 1968-1992 era.

Take a closer look at the photos and you will observe that Arden Alphonso Etienne is included in several, an indication of the man's contribution to local basketball. Etienne is well known among basketballers of yesteryear, current domino players, his family and his many friends as "Fanso", "Bédo" and "Fanso-Bédo".

Growing up on Fields Lane in Roseau where he played cricket and football, Fanso would sometimes visit St. Mary's Academy's court with friends Oliver Burton, Norbert Tom [deceased], Peter Skerrit and Wilfred Dalrymple, where they saw basketball being played, decades ago. These youngsters all became self-taught and, with a little coaching from Cardinals' Wilmoth LeBlanc, would subsequently make their individual marks in the national basketball league from the 1970s.

The first team Fanso played with was Roseau Concords while they were in the League from 1971 through 1973. His first team-mates included Carlisle Elwin, Cuthbert Elwin (deceased), Clem Severin and Adolphus David.

Fanso's next two teams were Raiders (from 1973), then Ambassadors. He disclosed that in 1974 he helped establish his next team, Flames, even though he was not a founder member. Fanso joined Flames in their fourth season and remained with them until they exited in 1994 or 1995.

Playing as a Power Forward, Fanso was well known for his sometimes physical approach to the game. He was a regular high scorer for his teams, and the highest individual score that he recalls hitting was 46 points for Flames, against SMA.

In May 1974 Fanso participated in a Marathon Basketball Match where he scored 116 points (2nd highest score). For his efforts he collected $116 from one sponsor, and smaller amounts from several others. That "all-day" fund-raising affair was organised by the Basketball Association.

Fanso got selected onto Dominica's Basketball Team from his second year in the League, and wore national colours for some 16 years thereafter. He toured with the team to Jamaica for the CARICOM Men's Championships, Antigua for the OECS Championships, Guadeloupe, Martinique and St. Kitts.

Fanso also participated in the inaugural OECS Basketball Championships, held in Dominica in 1984, and the last year that he represented Dominica was in 1990, at the OECS Championship here in Dominica.

Fanso loves basketball and, besides playing in the national league, he played in the SMA, DABA, Soufriere and Roseau Improvement Committee (RIC) Off-Season Leagues; he played with Chocolate County in the RIC League. Fanso enjoys US College Basketball, but is no big fan of the NBA.

Fanso also loved play invitational/friendly games in the out-districts, and vividly recalls travelling with six other members of Raiders on a Mini-Moke to Grand Bay, one Sunday afternoon in the 1970s, for a friendly against Pros.

Now, although Flames was a rival of Cardinals, Fanso was a "touring member" of Cardinals when they played in Antigua, Guadeloupe, Martinique, St. Kitts and St. Lucia.

Apart from playing, Fanso contributed to local basketball in several other areas. He served on the Executive of the DABA as a Committee Member, and also refereed in National, "Off-Season" and "School" Leagues.

Fanso coached three teams while involved in the game: Pioneers (Women), and Flames Divisions I and II. Moreover, Garth Joseph, who made it to the NBA, received some early coaching from Fanso.

A Jack-of-All-Trades who brews some amazing local wines, punches and other alcoholic beverages, Fanso used to annually assist the Basketball Association in preparing for the League commencement, in painting the court and back-boards and making nets for the rims.

And reminiscing a bit, Bédo noted that his biggest moment during his basketball career was playing on the national team when they won the 2nd Windward Islands Basketball Championship right here in Dominica in 1976.

Over the years, Alphonso Etienne received the following awards: Most Outstanding Rebounder while on Flames; 2nd Place (Silver) Medals as a member of the national team for the OECS and Windward Islands Championships; and a Gold Medal when Dominica won the Windward Island Basketball Championship.

Recently he received a Recognition Award from the Dominica Amateur Basketball Association for being part of Dominica's team that captured the 1976 Windward Islands Championship.

Fanso was also a member of Basketball Doctors, a football team that participated in the 1976 football league (See "Basketball Doctors… Playing Football?" in Jump Ball). But now long retired from basketball and football, Fanso is an avid domino player and heads Fanso's Domino Club.

Fanso believes in the saying, "Once a basketballer... Always a basketballer". And this he demonstrates by building up his display of basketball team photos. His most recent addition was of the 1975 Windward Islands Basketball Team.

Enjoy it, Mr. Etienne, Dr. Bédo… However you chose to be addressed.