Alwin Bully-the man and his mission 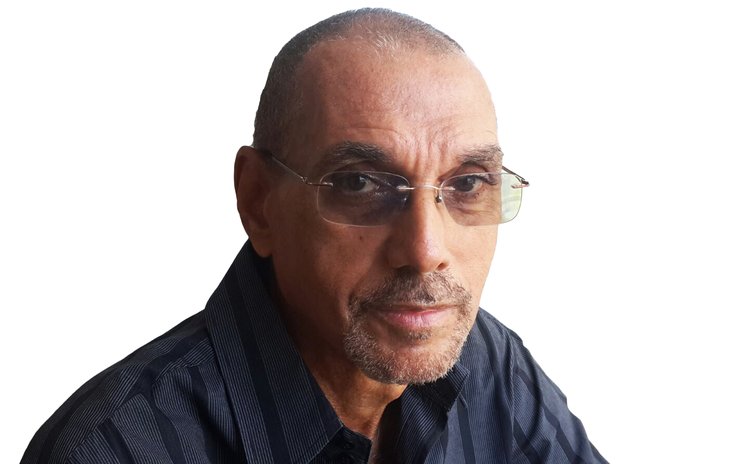 Alwin Bully is a unique and compelling figure in Dominica's cultural milieu.

For someone with a long career of stellar achievements on many levels, Alwin is remarkably unassuming. Yet, he exudes incredible power from studio to stage and beyond through his ideas, his knowledge, his vision and his passion.

Born on November 3, 1948, Alwin has spent most of his life preserving and promoting Dominica's culture and he deeply understands its complex nuances. He feels its rhythm. He knows its heart and soul.

He has made his extraordinary contribution to Dominica's arts and culture spans in three distinct areas as a groundbreaking actor, playwright and stage director; as an innovative artist and as a dynamic cultural activist.

Much of his passion is for theatre and he has written and produced many landmark plays, which have been performed extensively in the Caribbean.

As a playwright and director, Alwin has staged bold, evocative plays either authentic reflections of the colorful 'island culture' or adaptations with a distinctive tropical spin.

Alwin is also a creative artist and prize-winning Carnival costume designer. As designer of the island's National Flag, his artistic legacy is indelibly etched in Dominica's history.

A Modern Languages graduate of the University of the West Indies (UWI), Alwin taught at the Dominica Grammar School and served as acting Principal early in his career.

For his exemplary commitment and contribution to culture in Dominica and the Caribbean, his alma mater UWI awarded him an honorary doctorate in 2011, recognising him as one of the Region's finest cultural icons.

His career is decorated with numerous acting awards, as well as the prestigious Caribbean/United States Theatre Exchange Award for West Indies Theatre.

The foundation for Alwin's outstanding life was set in King George V Street, Roseau where he was born and raised and in Giraudel where he spent school holidays.

"I think the location of our house has a lot to do with who I am today," he said, "We lived on King George V Street. . . one of the main streets in Roseau…Carnival was a major part of our life in those days.

"There was no Independence celebration. . . so Carnival was the highlight of street parades and people getting together. . . the whole riot of colour and ideas and traditionwhich is Carnival was integral to my upbringing.

"Our house was like an open house. People would come for drinks and food. . . you would see people totally disguised. . ." He recalled seeing heavily disguised masqueraders drinking from funnels to avoid removing their masks.

Both his parents were artistic and loved culture. Pioneering cultural archivist Mable 'Sissy' Cauderion was his mother's first-cousin and his parents respected her work as a researcher and preserver of folk culture.

Alwin's uncle, an artist, was a major influence. Alwin started by teaching himself art as it was not on the school curriculum at that time. Another major influence in his life was Haitian artist Gilda Tabeau Nassief.

"When she came to Dominica in the 1960s…she did art classes and naturally I attended those classes…she influenced me a lot in terms of style, technique in…drawing and painting," he said.

Describing his artistic style, Alwin explained, "I don't have a natural inclination to abstract art, but . . . I found that doing representational art lacked excitement…so I began enlarging various parts of the drawings."

He credits the Christian Brothers who taught him as a child at St. Mary's Academy for encouraging the development of his artistic talents.

He has fond memories of Giraudel. "The influence of the storytellers at Giraudel on my life was very strong. …

"The Kompe Lapin (B'rer Rabbit) stories all in Creole of course all the songs and the music of it; the whole world of the supernatural… 'Soukouyant'…and so forth"; such stories were fine fodder for his artistic imagination.

With a background that was essentially a melee of folk traditions and classical traditions, Alwin has a wide appreciation for arts and culture from all over the world.

Alwin was drawn to drama and the theatre from an early age.

At the age of 18, he wrote his first play --"The Last Act" which was never performed publicly.

In the mid-1960s, he joined the Secondary Schools Drama Society, later called The Little Theatre Movement, which led to him acting in his first official play, Shakespeare's "Merchant of Venice".

When Alwin left Dominica to study at the UWI Cave Hill campus in Barbados, one of the first things he set about doing was putting together a drama society.

He then wrote a light comedy in a rural setting called "Good Morning Miss Millie", which was immensely popular and was staged extensively in the Caribbean. It was also published by Penguin and McMillan Caribbean.

That play has become an all-time favourite in Regional theatre.

Incredibly, Alwin wrote the entire play in only one night. "The only thing I had in my head was a little song I had heard….so I said: Who could be saying good morning Miss Millie and why? And that's how the plot developed."

Despite the play's success, Alwin said with a chuckle that he would not like his legacy to be based on it.

"I like dramas; strong dramatic stories. . . tragedies. I like strong central characters who have dilemmas that have to be resolved somehow."

He prefers to be remembered for "Ruler" a theatrical adaptation of "Ruler in Hiroona", or for producing Errol John's "Moon on a Rainbow Shawl", which the Cave Hill Drama Society presented to sold out audiences in St Lucia.

After seeing the superb earth moving performances in Barbados, in Dominica, he also adapted and staged Derek Walcott's "Tijean and his Brothers" and "Dream on Monkey Mountain", plays that influenced him profoundly as he matured as a playwright and actor.

Upon his return home, Alwin was happy to find the Little Theatre Movement alive and well. But they were not doing Caribbean plays because of a paucity of writers.

Along with his cousin, Daniel Caudieron, he set about reenergizing the movement and they renamed it the People's Action Theatre (PAT) which was revived again in 2008. It was intended to be the mirror of society, point out its ills and offer solutions.

When Daniel migrated, Alwin took up the mantle to write the plays. This started a prolific period of creativity in which he wrote "Streak"; "The Night Box" and "Pio Pio" among others.

Alwin broke new ground with his storytelling skills and entered the realm of broadcast media by writing and producing four major radio serials.

For the radio serial "Green Gold", he adopted a captivating, storytelling approach dealing with the challenges of banana farmers.

Alwin taught at the Dominica Grammar School from 1972 to 1978. When he indicated his need to leave and pursue his dreams as a writer, he was invited to set up a Department of Culture.

"Setting up a department was not easy…The whole department was me!" he said. Thus, he became Dominica's first Chief Cultural Officer, a position he held from 1978 to 1986.

He plugged for and was granted the use of the then dilapidated Old Mill Cultural Centre and got a small staff including eventual cultural stalwarts Pearl Christian and Raymond Lawrence and the new department began developing cultural programmes for schools.

Other important projects were the inclusion of cultural activities in Dominica's Independence celebrations and working with the Kalinagos to preserve their culture.

Significantly, the fledgling Department of Culture was also tasked with reviving Carnival, which had virtually died after the socio-economic devastation of Hurricane David in 1979.

As they pushed for the revival of Dominica's Carnival bands, they kept the event alive by bringing Antigua's popular

"Burning Flames" to play for Carnival in the early 1980s since most of the local band members had migrated.

In 1986, Alwin left for Jamaica to take up a position with UNESCO as Cultural Advisor to the Caribbean. During his tenure, he managed the coordination of UNESCO's general history of the Caribbean which was produced in six volumes.

Additionally, he assisted various Caribbean countries with the development of their cultural policies, among other cultural projects.

His workload limited his theatre involvement to directing plays, yet his shelf is lined with "Actor Boy" awards from Jamaica.

His writing has transitioned from stage to screen. Recently, one of his screenplays was accepted for the Trinidad and Tobago Film Festival.

Still an active member of Dominica's Cultural Council, Alwin is concerned that, in recent times, culture in Dominica has become stagnant.

He believes most Caribbean governments only pay lip service to promoting arts and culture and they have consistently failed to allocate adequate funds to get the job done.

Alwin is frustrated that the "Cultural Policy of Dominica" was approved by Cabinet eight years ago, but no implementation plan has been put in place.

He said he was appointed to the Cultural Council since 2008 and doesn't think there has been a minister of culture passionate about culture and who is willing to seek the necessary funding to effect significant cultural change and to develop cultural industries.

He maintained that Dominica needs a 'culture-czar' with a clear vision, access to sufficient funds and a passionate dedication to preserving and developing local arts and culture.

Sadly, Alwin disclosed that he has Parkinson's Disease which can be challenge as it is a condition that comes with low energy levels and weakening muscles.

But his story is still being written and, with unyielding positivity, he spoke of his plans to accomplish much more.

With his background of bold moves and high achievement against the odds, it's easy to believe that he will find a way as he has so often done before.