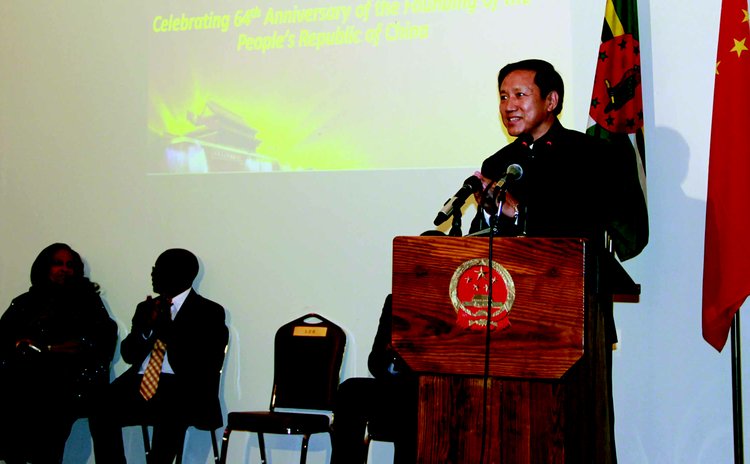 A group of Chinese experts are working hard in Dominica on the technical preparations for building the new Princess Margret Hospital, Chinese Ambassador said at a reception on Wednesday to celebrating 64th anniversary of the founding of the People's Republic of China.

In his speech Ambassador Wang Zonglai stressed that China is committed to helping other developing countries to achieve common development and prosperity.

He said during nearly 10 years since both countries establishing diplomatic relations, there have been sound cooperation in the areas of infrastructure, education, health, agriculture, as well as international affairs.

"When our countries established diplomatic relations almost 10 years ago, the Chinese Dream got connected with the Dominican Dream. During all these years, there has been sound economic and technical cooperation in the areas of infrastructure, education, health, agriculture and so on. We have also kept close coordination and collaboration in international affairs. Our win-win approach and mutually beneficial relationship have provided our people with better chances of realizing their own dreams and at the same time, contributing to the realization of the dreams of our countries," the Ambassador said.

"In the past few months, we have seen new development in our bilateral relations. Meetings were held between Hon. Prime Minister Roosevelt Skerrit and the new Chinese leadership including President Xi Jinping and Premier Li Keqiang. The State College and the State House projects were completed. Last weekend, a group of experts arrived in Dominica, and they are now working hard on the technical preparations for building the new Princess Margaret Hospital. And 10 more Dominican students went to China for higher education, health, agriculture, as well as international affairs".

Based on the good cooperation that already exists between our countries, we can further explore potentials in bilateral relations and take it to the next level, Ambassador Wang added.