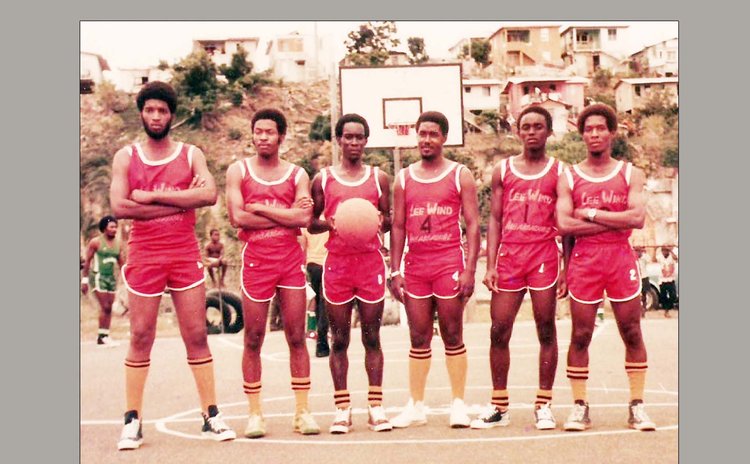 Ambassadors played in the DABA League from 1976 through 1981

Certain prerequisites are essential for the formation of a basketball team. Firstly, sufficient numbers of players are required. Secondly, the players need balls to train and practice with. Thirdly, an area to practice. Fourthly, a coach is needed to guide the team once formed and he may simultaneously serve as a player. Very importantly, a name which will identify the particular group of players from other similar groups. Furthermore, the team will need properly marked uniforms (with printed team name and player numbers), especially if it is to get into competition.

In 2019/2020 a 5-part article entitled, "Wildlife Gracing Our Courts" was published in Jump Ball. This presented the many teams participating in Dominica's national basketball league that had adopted names of animals – both wild and domesticated, big and small, dangerous and 'friendly' etc.

This article presents over 75 other teams, which adopted names of groups of individuals. From Ambassadors to Pioneers, Renegades, and so many others. The article presents teams from the four main divisions of the national league: Division I or Premier/Senior Division; Intermediates or Division II (also referred to as 2nd Level Division), Junior Division or Division III (a.k.a. 3rd Level Division) and the Women's Division, in addition to two special tournaments organised by the national association.

The names are presented by groups, and in alphabetical order within the group.

Holy Ones & Royalty: The national league saw two teams named Saints, with gender balance, coming from a Goodwill-based club. Saints played in the Women's Division only in 1982 and their male counterparts competed in Division II only in 1983.

Thirty-six years later, Wes-Mar Kings which comprised players from Marigot and Wesley competed in the DABA-7Six7-Entertainment Mackeson National Basketball Cup which was staged in St. Joseph in 2019.

Nationalistic Ones: One of the early teams in our basketball, Nationals – which emerged from Grand Bay – entered the then single-division Island League in 1968 and played for three seasons before fouling out in 1970 after their second season in the Junior Division.

Six years later i.e. 1976, Ambassadors, a Roseau-based team debuted in the senior division (Division I) and competed annually until 1981.

The year after Ambassadors debuted, i.e. 1977, Dominica's basketball saw the debut of the Roseau-based Pioneers, Dominica's first women's basketball team. Initially, in the absence of a Women's Division the ladies played in the Second (Junior) Division until the introduction of a Women's Division. They competed for at least five seasons, viz. 1977, 1978, 1980, 1983 and 1987.

The Professionals: The word 'pro' is short for professional, and 1974 saw the arrival of the first team with such a name. Pros, from Grand Bay, initially fielded a team which competed in the senior division and their participation in the national league was twice interrupted before they took their final jump shots in 2014 after competing for about three decades.

The next team to carry the name, Pros (III), played only during the 1983 season, in Division III.

Two new Pros teams entered the league two years after the 'juniors'. Pros II debuted in the Intermediate Division (2nd Division) in 1985, played annually until the 1988 season, and again in at least 1997 and 2006 before retiring.

The 1980s saw a team of students from the Medical School debut in the national league. Medics, as they presented themselves entered in 1983 but did not complete that season and never returned.

Men in Shining Armour: Black Knights entered the national league in 2011 and competed for only one season. They played in either the 2nd or 3rd Level Division.

In 2000 a Goodwill-based team, Spartans entered the national league, playing in the 2nd Level Division. They were succeeded by Spartans United (2013, 2015) and Spartans United Ballerz in 2014. Possibly they were the same team that modified their name.

The years 2015, 2016 and 2017 up until Hurricane Maria, had seen LA Knights from the South-Eastern village of La Plaine competing in the League's 2nd Level Division.

From Kòkòy Kontry Marigot came Warriors who first played in the 3rd Level Division in 1999. The following year (2000) they moved up to the 2nd Level Division, and from either 2001 or 2002 they began competing in the Premier Division and continued at that level for at least seven seasons, until 2015.