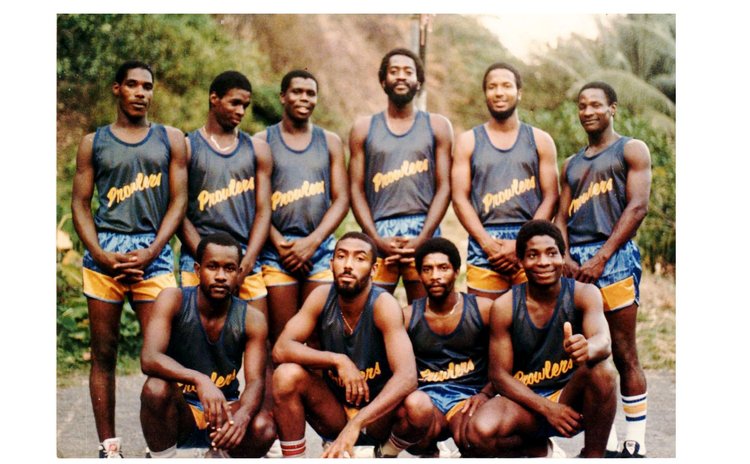 Intermediate Division Prowlers of the 1980s and 1990s

Part II of the article presented teams with 'bad boy' names. The article continues below.

In our Dominican parlance going 'on a lime' means taking a casual walk, and Limers was one of the pioneer teams that played in our Island League over 50 years ago. They competed in the then single-division league during its first two seasons, i.e. 1966, 1967.

Another team from the suburb of Goodwill registered as Northern Pacers, and they competed in the Intermediate Division in 1986 and 1987.

Roots Runners were an unsponsored team that played in the Intermediate Division, only in 1993. They were succeeded by Canefield Runners who participated in the 2nd Level Division in 2006.

Another set of players on the move were guys 'going on a prowl' (a stroll) and three teams from the Roseau Valley competed at three levels in the national league; two sometimes modified their name. They were ushered in by Prowlers playing in Division II in 1982. They then modified their name to Fond Canie Prowlers in 1983, but reverted to their original Prowlers name upon their return in 1987, maintained the shortened version in 1988 and 1989, but modified their name again, to Valley Prowlers in 1990, 1991 and 1992.

Playing in Division III the junior team debuted as Prowlers in 1988, then next played in 1990 as Valley Prowlers and reverted to Prowlers for the 1991 and 1992 seasons before 'taking a long hike'. The Premier Division team, however, registered simply as Prowlers from 2007 until 2017 (minus at least 2005 when there was no league).

Miscellaneous Names: As this grouping's name suggests, the themes of team names in this assemblage are quite varied, from law enforcement to domineering, from rookies to challengers, and from sisters to home boys, etc. We bounce off with ball players.

The first team with the name Ballers to participate in the national league did so in 2003, in the 2nd Level Division. Seven years later (2010), a Ballers team from Bellevue Chopin participated in the League at the same level as their predecessor. Shortly after (2011) the Roseau Valley produced Morne Prosper Ballers who were one of the teams that competed in either the 2nd or 3rd Level Division.

The Maggz Sports Club's Young Ballers played in the 2nd Level Division in 2014.

Two years later (2016), Lady Ballers from the 7Six7 Sports Club (originally Maggz Sports Club) competed in the Women's Division. They were followed three years later by Positive Ballers, one of the teams that participated in the DABA-7Six7 Entertainment Mackeson National Basketball Cup which was staged in St. Joseph in 2019.

Champs competed in DABA's 3rd Level Division only in 1999 but never won a championship in the national league.

It was ladies first when Lady Challengers from Paix-Bouche participated in the Women's Division in 2016. Three years later (2019) an all-male Challengers team competed in the DABA-7Six7 Entertainment Mackeson National Basketball Cup Tournament.

Dominators entered the national league in 2007 expecting to dominate their opponents in the 2nd Level Division but found the going rough and so became one of the several one-season teams.

High Flyers was a team of ladies that competed in the Women's Division in 1995, 1996 and 1997. In their final year they modified their name to High Flyers Acers.

Home Boys, a group of youngsters from Grand Bay, competed in the national league for four seasons, i.e. 1991 and 1992 in Division III, then stepped up to the Intermediate Division in 1993 and 1994.

A group of ladies who wanted to promote their village registered simply as Marigot Women and played in the Women's Division in 2016.

The northern basketball centre of Paix-Bouche has produced several teams, one of which first registered in 1991 as Paix-Bouche Rivals. That name was used for only part of that season as the team continued by their alternate name of Cobras in that same season.