An obvious fact: Dominica's roads are extremely unsafe-what are we doing about that? 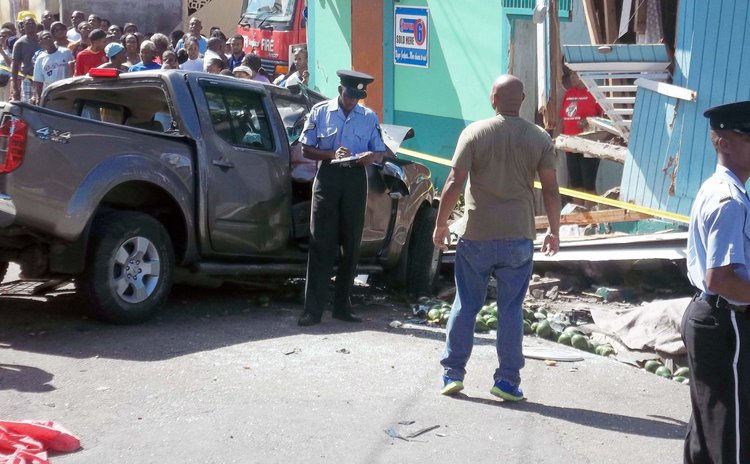 Last week's multi-victim accident at Ambar in Vielle Case is a typical example of how deadly our roads are. The railings on the side of the road which should have prevented the vehicle from plunging 400 feet down a precipice to the death of the four occupants was weak and badly constructed. We hate to say this but there will be many more fatal accidents on our roads unless we do something to remedy the situation.

It is, we believe, high time to take action to improve road safety in Dominica. The number of fatal road accidents that has occurred in Dominica say over the past five years and the dangerous driving we experience on our roads every day has generated much discussion about the need for the more efficient implementation of the country's road safety regulations as well as the enactment of new laws prohibiting the use of communication devices especially cell phones, whilst driving.

Though few road fatalities per year may seem miniscule, we are of the view that given our extremely lax road safety standards and our poor roads only God knows why there are not more frequent fatal injuries.

On an international level, the World Health Organisation (WHO) has declared that traffic accidents have become a global public health crisis and chose the slogan "Road Safety is no Accident" as its theme for World Health Day a few years year. According to the WHO, each year hundreds of persons die in traffic accidents and thousands more are injured. The economic impact of traffic accidents on developing countries was estimated to be approximately US$65 billion a year to include the cost of hospital care, rehabilitation expenses, the impact of absence of skilled workers from the work force, increases in insurance premiums and replacement of vehicles. Comparable figures are not available for Dominica or the Caribbean as a whole but in Jamaica, for instance, road accidents cost the country 25,000 man-days a decade ago, and $518 million in lost revenue.

As we stated earlier, given our low level of adherence to basic safety standards, traffic accidents should be occurring here more regularly. But thank God they do not. Here are some facts on which we have based our opinion. Undoubtedly, there is few of what the experts call proper "street furniture" in Dominica. These include traffic lights and clearly marked pedestrian crossings and barriers. Dominica may be the only Caribbean country without a single traffic light. Additionally, there is no system of training, certification and re-certification driving instructors in Dominica. Anyone, it seems, who holds a valid driver's licence can perform the role of a driving tutor and conceivably may transfer his bad driving habits to his student.

Then, there is the poor condition of our roads. These roads are generally extremely narrow and are constructed, mainly due to the terrain, with regular hair-pin bends and blind corners. Though road safety experts are of the view that road conditions are not the major causes of accidents, we believe that our roads surfaces do not inspire confidence in our road users, and that lack of confidence increases the risk of accidents.

Finally, there is an increased tolerance of drivers who use cell phones whilst driving, blissfully unaware of the dangers that they pose to themselves and other users of the roads. Over the past decade, most countries have banned the use of cell phones in vehicles because research has shown that drivers who use phones are about four times more likely to be involved in car accidents than in other situations where drivers are distracted. As more drivers in Dominica become habitual users of cell phones it is only a matter of time before the use of cell phones in vehicles causes major accidents, if they haven't already.

These issues indicate the need for the creation of a national road safety institution to address the issues of education, legislation, the improvement of the traffic environment and the enforcement of traffic laws. This, we suggest, will provide a structured and effective approach to improving the standards of road conditions and reducing the level of road accidents in Dominica.