And boy, did he do his thing! 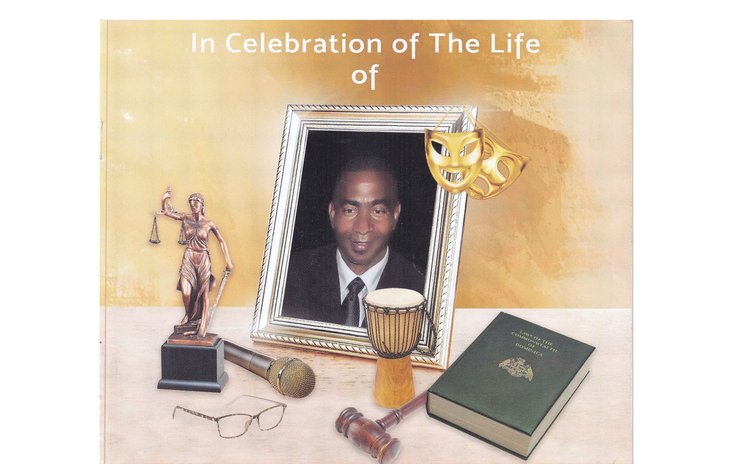 Michael Emanuel Bruney was born on 13th December 1957, the fourth of nine children of Fidelis and Jane Bruney, at 3 Greens Lane, Goodwill. His position in the family was tricky, in that he could not keep up with the close-knit "big 3" -Dave, Baba and Gee. As a small child he spent lots of time with his younger siblings. When he got into his teens, he carved his own nook, and boy, did he do his thing.

During school holidays he enjoyed spending time at Holmwood Estate with his dad and older brothers. He took a liking for broadcasting at an early age, doubt influenced by the likes of Jeff Charles, Barnet Defoe and Dennis Joseph, eminent personalities on local radio. As a child Mikey would grab a makeshift microphone (any object that resembles same) and conduct mock interviews with anyone who happened to be present. Later on, when he had the means, he would record those interviews on tape. He named his radio station' Radio-28 (using his father's banana farm registration number R-281). He also enjoyed acting. He had much fun doing imitations of various well-known characters, interpreting the voices and mannerisms of those individuals with remarkable precision, much to the amazement and amusement of his audience members of his household. He also wrote short drama skits and had his younger sisters act them out 'on stage', rewarding them at the end with prizes for their performance. This acting talent soon caught the attention of members of the People's Action Theatre (PAT) when he joined the group in 1973, Mikey drew close to its artistic director Alwin Bully and formed lifelong friendships with him and their members. During the peak of PAT'S high community impact Mikey was cast in several productions. He enjoyed his time on stage but was especially fond of touring all over rural Dominica and the neighbouring islands.

Meanwhile Mikey developed his passion for radio after joining the DBS team as an unpaid temp. He became a pioneer in the concept of community radio, performing singlehandedly the first activity of its kind in the north of the island in 1980. He continued in that vein for several years, bringing national attention to life in the remote villages. He was particularly proud of LaPlaine and Delices, the birthplaces of his parents. Unfortunately his vision and enthusiasm were not always shared by his superiors, and inevitably he found himself at odds with authority. Nonetheless he pursued his dream relentlessly, often at great sacrifice, with little or no recognition, and scant financial reward; but he always found personal satisfaction in his accomplishments and he also won the respect of his peers.

His preoccupation with those pursuits that he enjoyed SO much did not, however, meet with parental approval. It sometimes led to accusations at home that he placed DBS and PAT ahead of family. His father, whom he revered, insisted that he needed to embrace a "meaningful" profession and that one cannot make a living on radio and drama. After all Daddy was lamenting what to him was underachievement from a brilliant, multi-talented son, one of three who had entered high school at the age of 9, after having placed first at the national Common Entrance Exam and who went on to complete his 'A' levels when he was just 16 years old. (It's a true story that on the first day of school, when he was introduced to the assembly at DGS, he had to stand on a desk to be seen; he was SO short).

Notwithstanding, Mikey continued on his merry way, journeying all over the island doing what he loved best, until one particularly distasteful incident at work forced him to make a difficult life-changing decision about his future. So, at the ripe old age of 25, Mikey opted for a career change. He applied for and won a scholarship to pursue studies in law at UWI Cave Hill. He then completed the Legal Education Certificate programme at Norman Manley Law School in Jamaica.

Throughout his distinguished career as an attorney-at-law, barrister and magistrate, Mickey's love for radio remained undiminished. He would seize every opportunity to lend a hand at DBS when asked to do SO. He also remained faithful to the many friendships he had developed from school days. For example, he never stopped patronizing his favorite 'watering holes' Flamingo (n Boyd's Avenue and Spider's in Loubiere. Mikey was never too busy to come to the aid of family members and close friends when called upon. Examples of his generosity are far too many to cite in this forum.

As he distinguished himself as a broadcaster, Mikey also left an indelible mark on the legal profession. After qualifying as an Attorney in 1988, he served as Registrar General of the High Court from 1989-1993. He served in that position with distinction and earned the respect of his colleagues and the Judges whom he served, many of whom remember with fondness, his professionalism and diligence.

It was not surprising therefore that when the Ministry of Justice sought to reorganize the Registry, they called on Mikey to assist. When the Eastern Caribbean Supreme Court needed someone, who was knowledgeable on court practice, and the 2000 Civil Procedure Rules of the court, they relied on Mikey for his expertise.

Mikey was always willing to lend his support and advice to other lawyers, particularly to the younger members of the profession. He wanted most of all to see lawyers united, socializing with each other and most importantly upholding the traditions of the profession He made everyone feel at ease whether it was by imitating the accents of others, calling persons by pet names that he made up, offering to teach patois to others or just by his engaging humorous stories, with just a hint of inappropriateness.

He would be at the forefront of organizing activities for visiting members of the profession and was well known and liked by members of the OECS legal fraternity.

He believed very strongly that lawyers also had a duty to give back to the public and educate them on legal issues. When he served as President of the Bar between 2000-2005 one of the activities that he arranged with the support of other lawyers, was a radio programme to do just that. Mikey was always willing to help and despite his busy practice, agreed to sit as a Magistrate, serving intermittently between 2011, until his untimely passing. He was knowledgeable, competent, and efficient and despite his usual jovial self, was firm and no nonsense on the bench.

Mikey was always thorough and well prepared and served his clients fearlessly and passionately and conducted himself before the Court with respect and integrity.

Our Brother, Friend, and Colleague