Andre Fletcher: I deeply regret the trauma and hurt

Statement by Andre Fletcher, professional cricketer about incident in Dominica 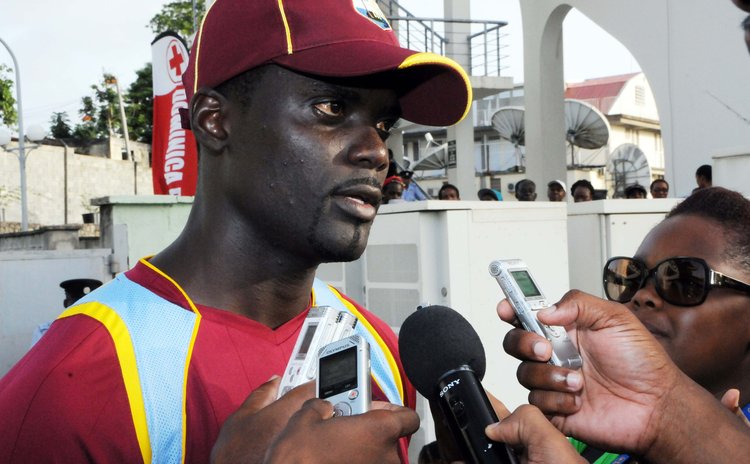 Andre Fletcher, right front, during the WI vs New Zealand ODI in Dominica in 2014

I am fully aware that my recent detention in Dominica had caused pain and consternation among my family, friends, fans, and the people of Grenada and indeed the region.

I want to assure all concerned that I accept the responsibility of a cricketer who has represented his nation and his region, to carry myself with the dignity and decorum that has marked my entire life and career.

The community at large must rest assure that at no time have I sought to do anything that will bring the kind of pain and embarrassment that the recent incident caused.

The recent widely-reported developments came about because of a misunderstanding; and at no time was I evasive or uncooperative.

I am also of the view that the Dominican authorities, who at every turn treated me with respect, after investigating the case believed the incident to have derived out of a genuine misunderstanding.

The following are the facts:

I am the owner of a registered pellet air rifle. I use this air rifle for the sport of hunting whenever the season is opened. I always strive to use this rifle in keeping with the laws that govern its possession. My air rifle is stored in Grenada and was not with me in Dominica.

Whilst in Dominica, I came into possession of a package of what I thought were pellets for my air rifle, and sought to carry them back with me. The package was obtained from a person who has a license to have such items.

I however accept full responsibility for the consequences.

I carried the package openly in my hand to and through the airport and subsequently loosely placed it in my carry-on bag as I sought clear security at the Douglas Charles Airport in Dominica.

It must be noted that I was not carrying a gun, I do not own a gun, and therefore I have no use for live rounds.

At no time did I make any attempt to conceal the package that I was carrying.

I wish to thank all those who have stood by me in the wake of the incident I want to specially thank our team manager Mr. Lockhart Sebastien of the Windward Islands Volcanoes, who assisted me through the legal process and who would have indicated to the media at the time that, 'It could have happened to anybody'.

It is important to reiterate that I never had any intentions of carrying live rounds and I have no use for live rounds. I thought that the items in my possession were pellets for my legally registered hunting air rifle.

As a member of the Windward Islands Volcanoes, I was in Dominica from the 25th of May for training. I continue to strive to represent my country Grenada, the region, my family and myself to the best of my ability. The unfortunate incident which led to my detention in Dominica on May 28th will not deter me from continuing to represent the region or my country once given the opportunity to do so.

I wish to assure my fellow Grenadians, my fans, and my family, that I am truly grateful for the opportunity to represent my country at this level; and I will never intentionally do anything to cause hurt or embarrassment to my nation, my fans or especially my family.

Those who know me will also know that I will never do anything to jeopardize my cricket career.

I deeply regret the trauma and hurt caused to my family by the incident, the legal process that followed, and the news reports and unfounded rumours that have ensued.

I have resumed my training as a professional cricketer, eager to maximise my opportunities as a player for the Windward Islands Volcanoes and the St Lucia Zouks.

Should I be given the opportunity, I also look forward once again to representing the region as a proud member of the West Indies Cricket team, understanding the value of its legacy, and of what the game means to the people of the region.