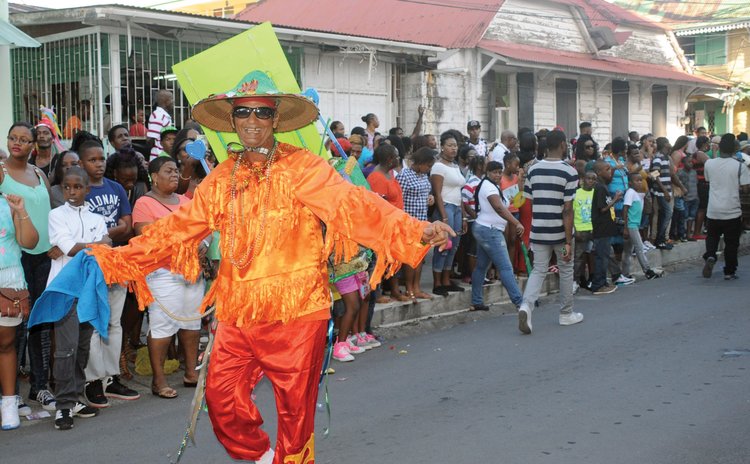 Andy Carter is a fun-loving person who certainly doesn't mind being the centre of attention.

Therefore, it's no surprise that he embraces his role as a 'One Man Band' and adds a touch of humour at 'Mas Domnik' almost every year for the last two decades.

Andy got involved in carnival festivities as a one man band purely by accident.

For jourvert 1996 he wrapped a towel around his head. When friends said he resembled an Arab, Andy decided to take it a step further.

He went home, put on a turban and wrote on it "Masari in Town", which referred to an issue of the day.

"Everyone found it funny. I just do that in jest…people like it so much they give me a special prize for that," he recalled.

Buoyed by the response to his first creation, Andy dressed himself up again for the following year's carnival.

That year, the prize went to Rupert Lloyd, but Andre had so much fun that he was at it again the following year. He hit the roads with a costume called 'The Last Arawak', which featured a grass skirt and a straw basket containing farine. He carried a stalk of 'bayleaf' as a flag.

Andy recalled that the costume was particularly appropriate because leading calypsonian 'Hunter' had a song that year called 'Carib Bacchanal'.

'The Last Arawak' costume proved to be a huge hit and won that year's Best Individual prize.

Since that first win, Andy hasn't looked back and has won the Best Individual prize repeatedly. One year, he also won the King of the Band prize.

Andy makes costumes that put a humorous spin on serious issues of the day.

Andy takes heed of social sensitivities and makes sure that his depictions are within the boundaries of good, clean, harmless fun.

His exceptional ability to handle sensitive subjects in a lighthearted, humorous way was exemplified one year when he portrayed a disgraced British doctor found guilty of poisoning his patients.'

Andy called his costume 'Harold Shipman, Eternal Rest Specialist' and he paraded in the streets dressed as a diabolical doctor with little bottles of 'poison' ready to be dispensed.

Over the years, he created many other memorable costumes including 'Mealy Bug', 'Sexy Helen' and 'Padams'.

For that one, he even carried a bag of salt making light of the Baroness's controversial "suce sel"[suck salt] statement, a hot issue in Dominica at that time.

The success of his costume designs have caused many persons to wonder how he comes up with his ideas.

Sometimes people suggest costumes or topics and Andy may incorporate their ideas in his creations.

Other times, he doesn't plan his costume in advance, but lets the idea for a great costume come to him spontaneously, sometimes as late as carnival day.

One year, he started out with just a hat, yet this became the inspiration for one of his best costumes.

"People does enjoy it . . . and you see the laughter. And it's that that does get me. That does energise me . . . when the people reacting to my things!"

Andy is a retired government worker whose passion is coaching lawn tennis. "My joy is to teach what I know in the little time God gave me on earth," he declared.

This declaration might gratify many of his fans at home and abroad who look forward to seeing his amazing outfits every year.

Clearly, if Andy decides to teach the 'tips and tricks' of making awesome costumes he won't lack students.

Meantime, all eyes will be glued to the carnival route to see what he comes up with this year.

One thing is certain — whatever it is, it will be good!