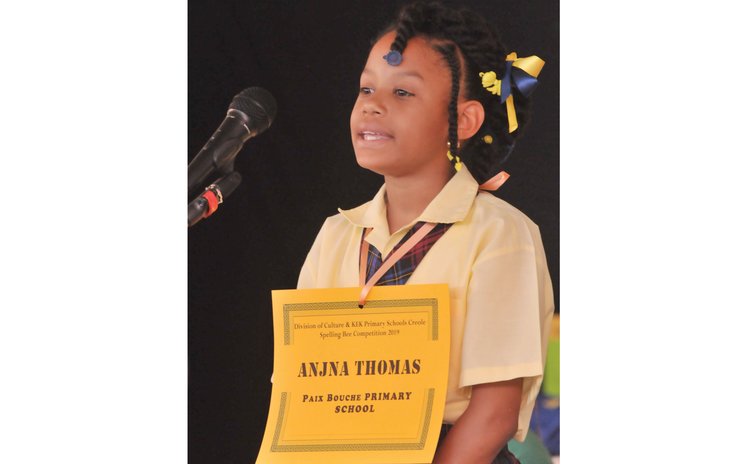 Annelia Aaron of the Roosevelt Douglas Primary School placed second and Lily Barry of the Goodwill Primary came in third.

Raymond Lawrence, the Chief Cultural Officer said Dominica has progressed in the promotion and preservation of the creole language.

"For centuries now, we've used the creole language in our music even with the Bélé dances. In more recent times, in the 60's, the folk groups have used a lot of the creole language and the singers in the Cadance like Ophelia and Midnight Grovers have also been promoting the language in their music as well," Lawrence said. "I encourage all Dominicans, especially the young people, to speak the Kwéyòl whenever the opportunity arises. In that way, we will be helping to preserve our traditions and keep alive a very vital part of our culture. It's all of us to play our role in helping to continue to prompt the language whether it's by speaking through friends and family, whether it's by taking part in the music and promoting the songs or whether it's through the media that we could help prompt this beautiful language of ours."

Melena Fontaine, the Chief Education Officer, said her ministry has made moves at introducing the creole language in the school's curriculum.

"We have heard the calls for an integration of creole into our curriculum and we recognize the importance of incorporating the language into everyday school instruction," she said. "Presently under the early learner's programme which is a programme to do with reading we are working on a language policy which considers the use of home language and for us in Dominica it includes the creole language… The importance of the creole language cannot be understated. We definitely cannot allow it to die; it is part of our culture and it's going to remain our culture."

The St. Luke's and Woodford Hill Primary schools also participated in the competition.