Anne Winn: I was stunned by its physical beauty 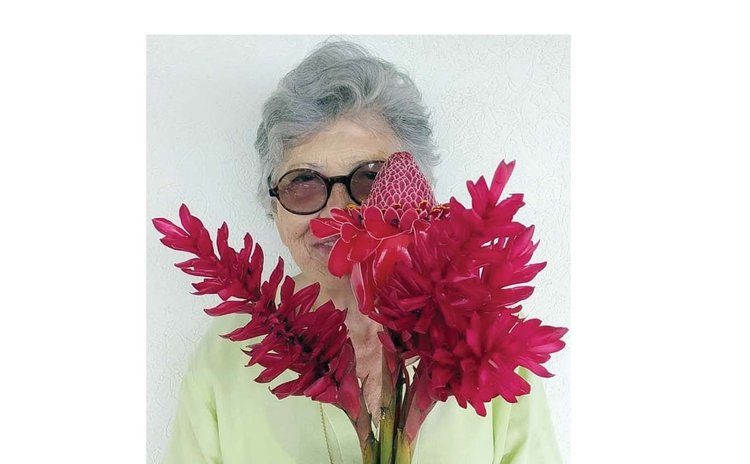 Anne Winn with a bunch of flowers

A green thumb, a love for flowers, and a deep connection to green country sides are among the things that make Anne Winn more than content to call Dominica, home.

Winn, originally from the eastern United States, first visited Dominica for two weeks in 2003 "…at the suggestion of a friend; an artist and a fellow gardener, also from the Philadelphia area, who stays on Pointe Baptiste Estate in Calibishie.", she told The Sun.

Dominica, as it has done to so many others, wasted no time in taking Anne's breath away.

"Stunned by its physical beauty and charmed by the independent but friendly spirit of its people," which struck a chord with Anne particularly because she had encountered plenty of phony, obsequious natives in more heavily touristed islands.

"I fell in love with the place," she confessed.

Any chance she could, she came back to Dominica, becoming forever enamored with the island, its attributes, and its people.

"In 2005 I sold my farm and spent the next three years helping to take care of my elderly mom, meanwhile, spending most of my free time visiting various parts of Dominica, looking for land," Winn said.

The ongoing geopolitical policies of the United States government were a key factor in helping cement Anne's decision to move to the Nature Isle.

"I was very opposed to the war in Iraq, and every war since," she stated firmly, "and was ready to leave the US after George Bush was reelected in 2004. I became a citizen of Dominica in 2009 and moved here permanently one year later."

Moving from a developed, fast-paced country to a smaller island nation requires adjustments and for Anne, it was no different.

"I had to adjust to the slower pace and lower my expectations regarding punctuality and reliability of services and service people," she said.

But there is a flip side, Anne discovered.

"What I got in exchange was courtesy, some respect for my elder status, and the pleasure of living in a near carbon-neutral country," she added.

Dominica's motto 'Apres Bondie C'est La Ter' perfectly sums up Anne's attitude towards life and living in the country. Her love for gardening is also evident.

"As the owner of a small citrus farm producing two types of grapefruit, tangerines, ortaniques, and common oranges, all organic, I do not use chemical fertilizer or pesticides," she said.

The biggest change to the country – which Anne had fallen in love with initially – was the result of Hurricane Maria, which brought a profound alteration to the landscape, the population and the economy.

"Through it all, I have found the ability of nature to rebound to be amazing and my fellow citizens to be helpful and for the most part self-reliant," she said. "Dominica has proven itself to be up to the task of weathering disasters."

It is, therefore, no surprise that Anne – who retired from a forty-year career in advertising and marketing at the age of 62, having spent half of those years writing, producing, and voicing radio and TV commercials – is the narrator of a Derek Galon film titled "Three Years After".

"I recently came out of retirement to voice a 7-minute film about Dominica's recovery, Three Years After, shot and scripted by Derek Galon," she said. " You can find it on YouTube."

Despite being a retiree, Anne has found several ways to give back to the people of Dominica, primarily through her membership in the Rotary Club of Portsmouth which has undertaken a multitude of projects including: "Renovating the emergency room and waiting area of the Portsmouth Hospital, re-roofing the canteen at the Dublanc/Bioche school and restoring their greenhouse, providing Wi-Fi and chrome books to every elementary school on the island, plus most recently training and equipping 30 neophyte beekeepers."

Anne Winn, now 81 years old, plans to end her days in the lovely Nature Isle, which she calls home.