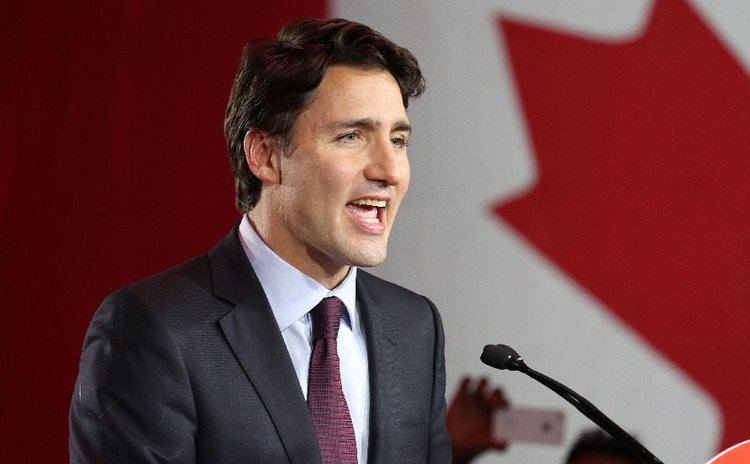 Trudeau's father, Pierre, served as Canadian prime minister between 1968 and 1984.

Justin Trudeau's Liberal Party won 184 seats, forming majority in the newly expanded 338-seat House of Commons. The party has members of parliament elected in all 10 Canadian provinces and three territories.

It was an extraordinary breakthrough for a party that suffered its worst defeat in the 2011 federal elections that left it with only 34 Commons seats and began the 2015 election campaign in third place.

It was also a stunning loss for outgoing Prime Minister Stephen Harper, whose Conservative Party was reduced to 99 seats from 159, relegating it to second-place opposition status.

Telling supporters in Calgary that the results were unexpected, Harper said that the Conservatives would form a "strong official opposition," even without him at the helm.

In a statement issued late Monday night, Conservative Party President John Walsh said that Harper had instructed him to reach out to the newly elected parliamentary caucus to appoint an interim leader and begin the process to choose the next person to head the party that had been in power for the past 10 years.

The Liberal surge also came at the expense of the New Democratic Party (NDP), which started the election campaign 78 days ago in first place and ended up on Monday in third place with 44 seats, or 50 fewer than what the party held in the last parliament.

The Liberals had not fared well in Quebec, Trudeau's home province, since 1980 when it won 74 out of 75 seats under the leadership of Trudeau's late father.

Justin Trudeau made no paternal references in his victory speech Monday night, but echoes of Trudeaumania, which swept his father to power three years before he was born, reverberated across the country from voters who opted for the "real change."

"A positive, optimistic, hopeful vision of public life isn't a naive dream -- it can be a powerful force for change," he told his enthusiastic supporters in Montreal on election night.

"We beat fear with hope. We beat cynicism with hard work. We beat negative, divisive politics with a positive vision that brings Canadians together."

With those words, Trudeau channelled his father, whose oratorical skills were part of the charisma that captivated Canadians more than a generation ago. For those too young to remember that time, there was a tangible reminder in the Montreal Liberal crowd Monday night.

Along with the prime minister-designate's wife and three young children was his mother, Margaret, who gave birth to him when she and her husband Pierre, lived at 24 Sussex Drive, the prime minister's official residence in Ottawa that Trudeau and his family will soon occupy.