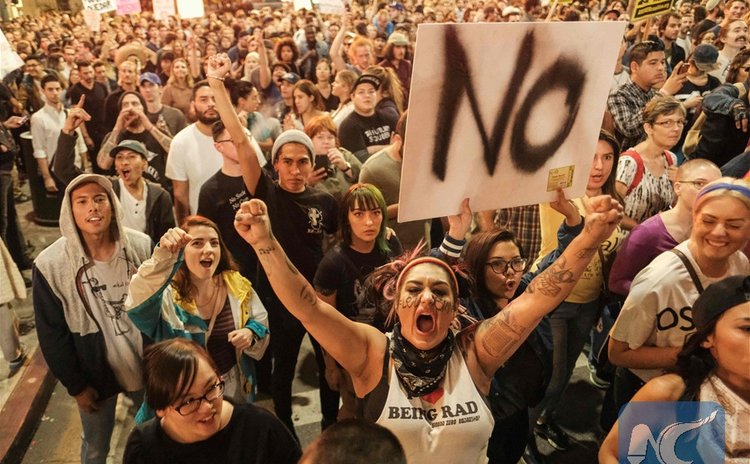 Demonstrators gather to protest a day after President-elect Donald Trump's victory, at a rally outside Los Angeles City Hall in Los Angeles, California, on November 9, 2016. (AFP/Xinhua)

NEW YORK/LOS ANGELES, Nov. 12 (Xinhua) -- Thousands of protesters marched again on Saturday in major cities across the United States to demonstrate against the election of Donald Trump to be the 45 president of the United States.

The "we reject the president-elect" chant echoed far and wide again in New York City Saturday, as thousands of angry New Yorkers protested for the fourth consecutive day against Trump's win in Tuesday's presidential election.

The protesters, most of them young people, gathered at Union Square in force and soon marched towards the Trump Tower on Fifth Avenue, residence and campaign headquarters of the real estate mogul and reality show star turned politician.

Holding signs "Love trumps hate" and "Not my president," demonstrators filled the busy avenue famous for its high-end retail stores for almost fifty city blocks and cut off through traffic.

The police force of the city was on high alert, barricading the entrance of Trump Tower and many storefronts in case the protest turns violent.

"We are not trying to change the result, but to express our discontent and anger for this mistake made by many uninformed voters," said protester Chris Wells.

"This man is totally unqualified to be our president and I fear for our future," he added.

On the west coast, about 10,000 marchers poured onto the streets of Los Angeles, the state of California, to show their anger and frustration against the president-elect.

About 8,000 protestors gathered on Saturday morning at MacArthur Park, downtown Los Angeles, which has been the site of numerous demonstrations over the years.

Protesters were marching through downtown Los Angeles, chanting "not my president" and holding signs of "HATE NEVER MADE US GREAT!" and "United against HATE."

Various streets and freeways were closed in the city downtown area due to the protest, Los Angeles police Department (LAPD) tweeted. "No arrests have been made."

During an anti-Trump protest that stretched from Friday night into early Saturday, several thousands of protestors marched through downtown Los Angeles when some of the demonstrators began vandalizing property, blocking main roads, assaulting, and interfering with officers, and refusing to leave when conditions became unsafe.

As a result, 187 adults and eight juveniles were arrested, according to the LAPD.

Los Angeles police have arrested hundreds of people over the last few days, including Wednesday night when some demonstrators blocked lanes on the 101 Freeway.