Apartment owners in Portsmouth: It's a struggle after Ross 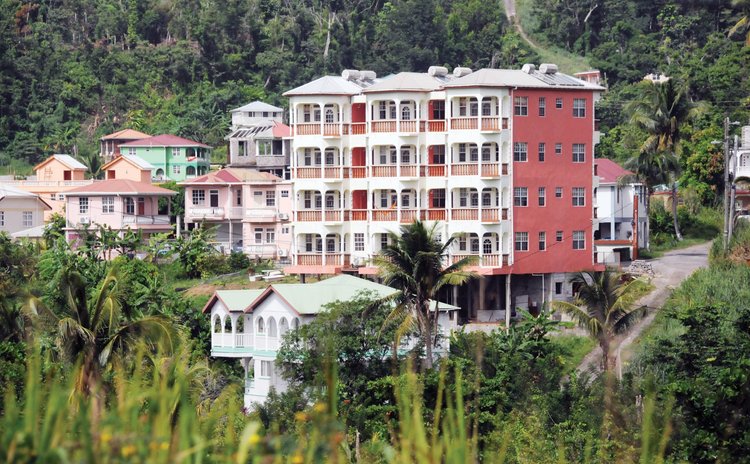 There isn't a day that Charles Brown (not his real name) awakes and isn't reminded of the nearly half a million-dollar debt that he owes to the bank.

A decade ago, with the rental of his properties booming in Portsmouth, Dominica's second town, the businessman took out an EC$ 850, 000 loan to increase and upgraded his two-floor home to a 10-single and double-apartment complex solely for the students of Ross University.

At its peak, the landlord, who requested anonymity to speak candidly on the issue, stated to the Sun that he raked in over US$10,000 a month for his fully furnished properties. Now at his lowest, his monthly income isn't nearly enough to cover his obligations to the bank.

August 3, 2021, marked the third anniversary since Prime Minister Roosevelt Skerrit delivered the heart-wrenching news to the nation that the offshore American educational facility, Ross University School of Medicine (RUSM), had pulled out of Dominica after 40 years, and would instead shift its operations to Barbados.

Over 1000 days later, the business community in Portsmouth still longs for a miracle-the return of Ross.

They took mortgages and built homes, assured of a steady income from an institution that was born in Dominica four decades ago.

His sense of hopelessness is representative of hundreds of people in Picard, and Portsmouth as a whole, who made a living from providing accommodation for about 1400 students and faculty of the school.

But Ross University was more than just users of housing. It transformed the town and its immediate surroundings, spawning a range of businesses, and generating anything between 30 and 40 cents of every dollar the country earned, according to various estimates.

Everyone from the handyman to those who repair buildings, plumbers, electricians, restaurant owners, the telephone providers, the water company, DOWASCO, and the electricity company, DOMLEC, have felt the departure of Ross.

Another business owner has also stated to the Sun that their hopes to rent their apartment nightly has further been shattered with the opening of the Kempinski Hotel.

"When Ross had just left we used to get one to two couples who were looking for rooms to book nightly so that earned us an additional income but with the increase in competition with the hotel, business continues to go out the window," she claimed.

Similar sentiment has also been echoed by a former restaurateur who was located a walking distance from the university.

Other business owners who spoke to the Sun lamented on the high presence of Haitian nationals in the area who seem to have replaced the international students.

"Many of us don't want to rent our place for them because they say is one and next thing you know is all six or seven that's in your house but at the end of the day we have to because of we don't have business, there aren't enough people in this area who are looking to rent and even if they do, they will never pay the price the Ross students would pay", the landlord said.

Since Ross's departure, there have been numerous promises from the government of a replacement for the university which contributed greatly to the Dominican economy.

That last public statement Prime Minister Skerrit made on Ross's replacement was in December 2020 when he announced that his government was not ruling out the option of terminating a relationship with the Dominica University & School of Medicine (DUSM); a new university that on November 25, 2020, revealed that it had taken over the compound and commenced classes for the Doctor of Medicine (M.D) degree.

The university also mentioned plans for the earlier commencement of face-to-face, on the island but said that classes had to be postponed due to health and safety considerations and the consequent restrictions on international travel brought about by the COVID-19 pandemic.

In addition to medicine, the DUSM revealed that it is also offering degree programmes in nursing and pharmacy. Also included in the university's development programme were courses in forensic science and medical marijuana.

The University said scholarships and discounts are available to Dominican students desirous of pursuing careers in any of the medical disciplines on offer and urged interested persons to apply at the earliest.

However, contrary to this announcement, Prime Minister Skerrit said on his Sunday talk show that the government has had "some issues" with the investor in terms of the approach that has been taken in the past.

"…I have raised those concerns with him and his company. I am not quite satisfied that they have addressed those concerns even if they have started classes online. So I am not ruling out as I've said before…the government terminating its relationship with this group," Skerrit said.

According to the Prime Minister, his government is currently discussing with another group as they have given DUSM a timeline to address its concerns.

The Prime Minister said his Cabinet will make a decision on this sooner rather than later and provide an opportunity for the second group to demonstrate its capacity and the ability for the establishment of a school in Portsmouth.