As the APP searches for a political leader, two prominent Dominican women say no to the party's offer 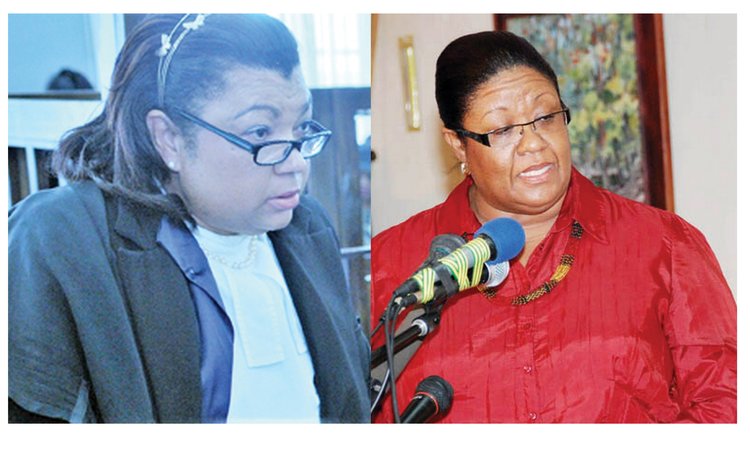 In a frantic bid to present itself as a legitimate pretender to the seat of government, the fledgling Alternative Peoples' Party (APP) has been reaching out to a number of leading Dominican women, inviting them to be its political leader. However, the party's efforts have all come to nought thus far.

The Sun can confirm that both Dr. Hazel Shillingford-Ricketts, the well-known and experienced ophthalmic surgeon, and attorney-at-law, Singoalla Blomqvist-Williams, have been approached, and both have said an emphatic no to the APP.

"Someone did call me once and informed me about the party being formed and that they were looking for persons to serve as a leader and I mentioned to them that I'm not interested and that was the end of it. I never had no further contact with them," Dr. Shillingford-Ricketts confirmed. "I told them at this point in my life I was not interested in being part of the party or any leadership position."

In what appears to be a desperate attempt to lure Blomqvist-Williams, the APP wrote to the prominent attorney via email on 19 April, urging her to accept the leadership position and begging her to "do it for country."

"We need you to lead the future of Dominica's political progress because you possess all the prerequisite skills: people-centered, community-oriented, socialiable (sic) , politically untainted, charismatic, firm, fresh, equipped, selfless, worthy, genuine, strong," the party wrote in the email, a copy of which was obtained by The Sun.
It argued that the APP had similar characteristics, was "the in-thing when it comes to Dominica politics," and that Blomqvist-Williams' leadership would assist all four political parties for various reasons.

"Your friends in all the parties will better embrace you as the leader of this new era of Dominican politics within this new APP outfit. You won't get the same fresh, compelling and rallying impact with any other party," the APP stated in its political suitoring. "Dominica needs your leadership now – you have everything it takes to lead NOW . . . Do it for Country."

Blomqvist-Williams told The Sun she hadn't seen the letter but confirmed she had been approached and had rejected the party's advances.

"I'm not involved in politics, I'm trying to rebuild my farm now," asserted the attorney, who has cut back on the amount of legal work that she does. "I am not interested [in politics]."

One APP source, who spoke on condition of anonymity, told The Sun the party was also interested in Dr. Simone Mathieu, an associate professor of psychology at the University of Phoenix in the United States, who has been heavily involved in the party's media outreach in recent times. It was not immediately clear whether Mathieu was asked to lead the party.

A leader is expected to be announced at the APP's twice-postponed delegates conference, a new date for which has not yet been set. But, even among senior members, there's scepticism that the new leader will be anyone of prominence.

"As far as I know they have asked just about five women to be the leader, but all have declined," one person told The Sun. "Alex [Bruno, the party's political strategist], has said that he wants it to be a woman, but getting a prominent woman to take on that post doesn't seem like it will become a reality anytime soon."

The scattershot approach to finding a leader of note suggests a lack of confidence in the ability of the interim boss and co-founder, Tahira Blanchard, to build a political force capable of challenging the incumbent Dominica Labour Party or any of the opposition parties.

By all accounts, Blanchard, who is the face of the party, wants the job rather badly. But the natural health and wellness practitioner and former United Workers Party senator, has been cagey about her plans.

In fact, even though the APP insisted on its first anniversary in January that it was fully transparent and open with the people of Dominica, Blanchard has been anything but transparent on issues ranging from a meeting with the Dominica Freedom Party (DFP) to information on the her party's major financial backers.

Asked by The Sun for an update on the meeting with the DFP on 24 February to discuss areas of cooperation, the APP leader refused to even confirm or deny that a meeting took place, stressing she would "not be having any discussions and really anything to do with the Freedom party . . . there is nothing to respond to in relation to that."

Asked to disclose the party's funders in keeping with her pledge to be transparent, Blanchard told The Sun: "There is no way I would answer that question." When pressed, she politely ended the conversation.

The party has succeeded in securing a symbol from the electoral office – seemingly the only victory it has scored. The Sun has obtained a copy of a letter from Ian-Michael Anthony, the chief elections officer, dated 8 September – the year is listed as 2019 but all indications are it was written last week – advising that the APP had been allocated the clock as its symbol.

This small victory apart, the APP's inability to attract anyone of note – and its failure to secure the DFP's cooperation, is proving a major stumbling block to its progress. While the COVID-19 pandemic was given as the official reason for postponing its delegates conference, one senior member told The Sun this was "far from the truth, very, very, far.

"The real reason is because of a lack of membership," said the person, who spoke on the usual condition of anonymity because the person was not authorised to discuss the matter. "Yes, we have several group chats with young people expressing their interest to be part of the group, but when it comes to prominent individuals, the well-respected, the who's who, we don't have that."