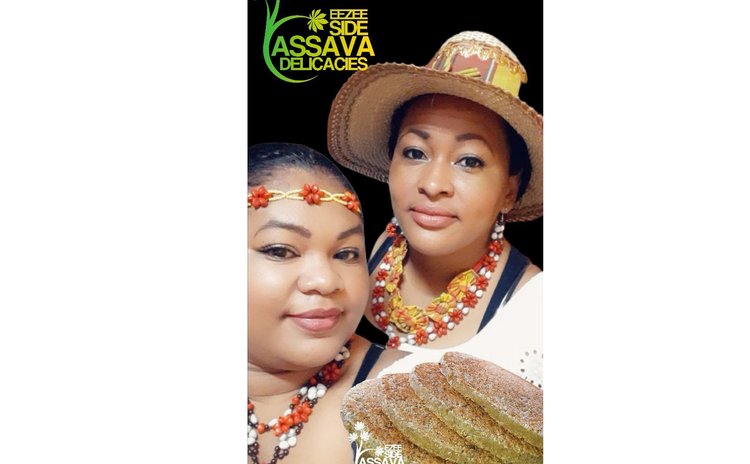 Two young ladies from the Kalinago Territory have made it their mission to walk in their grandfather's footsteps while adding a touch of modernity to the traditional.

Arnique Valmond and Valary Antoine, both from Salybia, co-own Eezee Side Cassava Delicacies, an agro-processing company that transforms cassava (manioc) into a wide array of by-products.

As Valary told The Sun, the idea stemmed from youth and the close relationship with their grandfather, Alphonse Francis.

"He was known as the 'Cassava Man' by his customers. During our school days we would see him making the product, which he wanted us to continue," Valary said. "Before his death he said 'do not let it go.' So, it's a legacy from our grandfather."

The company, registered seven years ago, now has pizzas, pastries, and a drink to its name. According to Arnique, the sisters built on the recipe left behind by their grandfather.

"We added value to the product,"Arnique said. "My grandfather started with plain cassava bread and added coconut and ginger. When we came in, we added saltfish, smoked herring, cheese, raisins etc. Then we started making pastries; we do composite bread, which is loaf oven-baked; we do pizza, lasagna and a cassava drink." The sisters, respectful of their grandfather and the knowledge he passed down, chose to move with the times and this is how they came to own a place in Roseau to share their heritage.

When our grandfather could no longer go to Roseau and sell, we decided we are not going to do it that way and walk around town asking people to buy," Valary explained.

We now have a place at the Roseau Market, on DEXIA's compound, where we sell cassava products Wednesdays, Fridays, and Saturdays," Arnique added.

Valary says there are a multitude of benefits in carrying on her grandfather's legacy and promoting her Kalinago culture.

"It is very important because I see it as a unique business that has a lot of benefits and it can make you independent and create jobs for people," Valary said.

Eezee Side Cassava Delicacies currently employs five people to ensure the smooth running of its Roseau branch and its flagship establishment in Salybia. Arnique, a hard-working multi-tasker with a positive mindset, says while pleased with an outlet in the city, the company has been met with its challenges.

"One is the supply chain of raw material," Arnique said. "So right now, we are making contracts with farmers so we can always be supplied."

Both ladies agree that marketing is a major hurdle to overcome, and Valary cites financial support as a troublesome factor.

"The most challenging part is not getting much assistance, and the marketing part. When we started, we started from scratch. So that is a challenge," Valary said.

Valary, who describes herself as a brave, strong, independent Kalinago woman, says feedback on the new products has been phenomenal and the future looks very promising for the company.

"Future plans are for our products to be on shelves in supermarkets around Dominica, and to be in demand in other countries," Valary stated.

Arnique agrees that wider circulation of the product is key, particularly as people are now more health conscious.

"The business has a lot of potential, seeing we have a very unique product and it is gluten free," Arnique added. "Many people are speaking about cassava now and they are interested, it looks like a lot of market will come from it."

Valary pointed out there has been more competition over the years with other people selling similar products, but she and Arnique are determined to uphold their grandfather's bequest through Eezee Side Cassava Delicacies.

"When we started, we were the first ones, but as time continued there were a lot of competitors because they are seeing it is a product that can bring in money," Valary said. "So, there are many competitors now."