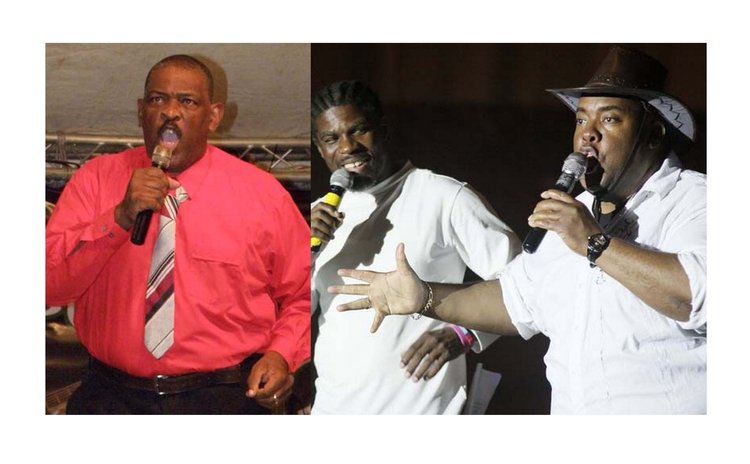 Reynold is that spirited player from Dubique who first played with Stowe Comets, then Dubique Stars, and later Heineken Pros in the national league. He once held a record in local basketball for scoring 7 Three-Pointers in a game.

However, in Dominica's Culture & Entertainment circles Alcendor plays percussions and does back-up vocals with Midnight Groovers, which he also manages. Additionally, Reynold competes in Grand Bay's Calypso competition under the stage name, "Messenger", and is a four-time Calypso Monarch in the south.

Roy played league basketball with Harks in the 1970s, and also served on the Executive of the Dominica Amateur Basketball Association as Treasurer in 1987 or thereabout. Away from the court, Roy was a "boss keyboardist" and displayed his skills with no less than five bands in the 1970s: Naked Feet, Belles Combo, Swingin' Stars, Stylee and Midnight Groovers.

Sammy played basketball with Cardinals, and is currently a trombonist with the Music Lovers Government Band. He was also a member of the Ignitions band while the latter was on the entertainment scene.

Stanley played basketball with Flames, then Hoyas in the Premier Division. The son of retired calypsonian "De Saint", a few years ago Stanley entered Dominica's Calypso arena under the stage name, "Son of The Saint". He competed in the Calypso Finals on a few occasions and many will remember his big hits, "Tété on Belly" and "Right Foot... Left Shoe…"

"Wong" played basketball with and coached the Pros Division I team. He was also the guitarist with the Grand Bay Roman Catholic Church choir for several years.

Up until recently, Travis played basketball in the national league with Ole Skool in Division I; prior to that he played with Black Hawks. Away from the court, Travis sang tenor with the Woodford Hill Roman Catholic Church Choir. He is also a member of the New Dimension Theatre, and his biggest part played has been 'Ping', in the production, "Desired Will".

In the mid- to late-1980s "Val" was the big man on Northern Pacers (Division II basketball team) from Goodwill. He later became President of the Dominica Amateur Basketball Association for two non-consecutive terms (late 1980s, 1990s).

Val first took to the stage in the 1980s, with New Dimension Theatre. Subsequently, he played the part of 'Young Bull' in the screen version of Jean Rhys' novel, Wide Sargasso Sea, which was filmed in Dominica in 1991.

Val, however, is more popularly known as an entertainer, having entered the Calypso arena in 1988 under the stage name, "Young Bull". He produced a cassette of his songs in the early days, and has competed in the Calypso Monarch Finals.

Young Bull's 'Chew My Pocket' ruled the streets on Carnival Monday and Tuesday in 1988, and his other popular hits include 'Bus Man' (supported by a music video), 'Pastor Bull' and others. He is also a very popular Master-of-Ceremonies at Calypso Finals, and even emceed a Calypso Finals in St. Lucia in his heyday. Currently, Val also serves as Original Bouyon Pioneers' manager.

"Plastic" who has sometimes been casually called "Mr. Basketball Himself", was a founder-member of Cardinals (1968 to 2004) - Dominica's most decorated basketball team to date. Willie captained and coached the team for several years, and later went on to form Owls (Division I) in the mid-1980s.

LeBlanc also served as Cardinals' coach and Dominica's national coach, and was the first local President of the Dominica Amateur Basketball Association However, quite apart from displaying his skills on the court Willie was also the bass guitarist with Orientals Combo in the 1960s.

So, with such diversity of cultural, artistic non-basketball talents available, from actors and comedians to musicians, from vocalists, song-writers and costume builders to a poet and an arranger, is anyone going to step forward to produce the BOS (Basketballers-On-Stage) Extravaganza? Of course, the venue for such a mega-show would have to be a basketball court. But, will that be at Goodwill, Grand Bay, Marigot, Massacre, Paix Bouche, Pichelin, Portsmouth, SMA, Trafalgar, or elsewhere? With dunking and 3-Point Shoot-Outs for extra entertainment?

And, just in case as a reader of this article, you played basketball in the national league and were also involved in arts, culture or entertainment and were not mentioned above, please do not feel left out. The game-clock is counting down as we await the buzzer to sound.

Special thanks to all those who contributed to the production of this mega-article.