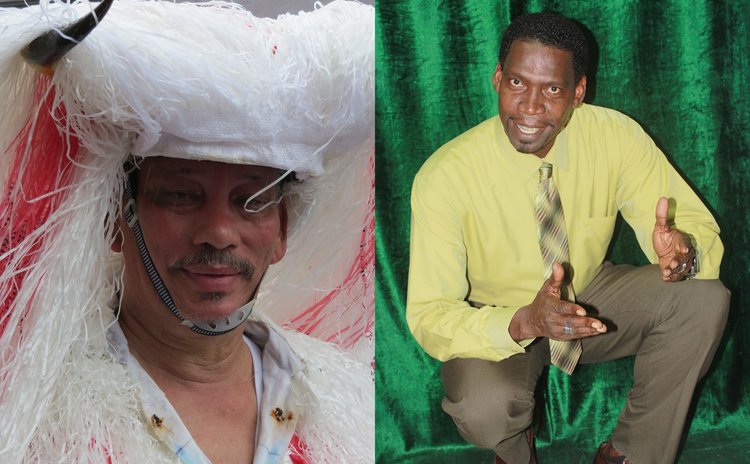 "Maggie" is well-known in Dominica's sporting arena, particularly in football, basketball and to a lesser extent athletics. He first played competitive basketball with Glassgovians (Off-season team) and shortly afterwards he became a founder-member of X-Men. Several years later Maggie formed and served as player-coach of Maggnificos, which participated in Division II of the national league. He also coached Lady Maggnificos, which subsequently changed their name to 767 Lady Ballers.

Quite apart from playing with and coaching basketball teams, Maggie served as PRO of the Dominica Amateur Basketball Association, officiated several games in the national league and ran summer camps for young basketballers.

Maggie is also well-known in Dominica's showbiz circles. He was a stage-hand, then sound engineer, and subsequently the marketing and promotion man for the WCK Band. He also served as manager of several other bands and artistes, such as Nayee & Skinny (duo), Caribbean Vybez and Kross Vybes. Maggie also wears the Events Co-ordinator cap and has produced several events such as Creole in the East, Bouyon Slam Jam and a local show featuring international artiste, Carimi and others.

"Lobie" played basketball as a guard, initially with Electrons and later with Harks. He also sang with the St. Alphonsus Roman Catholic Church Senior Choir and was a member of the Goodwill Folk Singers. He plays 'mas regularly with Kannaval Korner, of which he currently serves as PRO.

Embert Stowe was a founder-member and Player-Coach of Nationals basketball team from Grand Bay. Embert, however was also well known as a calypsonian who performed in the national calypso competitions under the stage name, "The Saint". Embert's son, Stanley, followed his footsteps in both basketball and calypso.

These ladies were all members of Pros Sisters basketball team in the mid-80s. On stage, Emelda and Octavie are members of Tradibelle, while Annie, Leorine and Gabrielle sang with La Jeune Etoille Chorale in the '70s.

Felix played basketball with Pepiz Pros in one of the lower Divisions in the national league. But on stage, Felix played with the Black Bees band from Grand Bay, sang with Midnight Groovers in their formative years, and was also a member of the Southern Liberation Dancers from Grand Bay.

Franklyn Moses played basketball with J.K. Eagles, Flames and then Clouds in Division I of the national basketball league. As a player, he was well-known for his on-court antiques and his unique style of dunking. But out of the uniform and boots, Franklyn is a very entertaining stand-up comedian who even held his own show at Arawak House of Culture. He has produced many entertaining commercials, and also served as the Master of Ceremonies at several shows, pageants and even a Body-building contest.

Glen played basketball with the original Raiders (from Roseau) in 1974. He was also a vocalist with Naked Feet, one of the bands that helped push Dominica's cadence music in the mid-1970s.

Gustav captained Argonauts basketball team in the late 1960s. From the asphalt to the stage, multi-talented Gustav was also the band leader, bass player and occasional vocalist with the then popular, Roseau-based De Boys an Dem in the early 1970s.

Henson, sometimes called "Vincent", was a guard on the Green City basketball team when they played in DABA's 1985 Division I League. He is also a calypsonian, performing under the stage name "Inciter". Some may remember his very popular number, 'Doh Boo-Doo-Boops De Woman Chile' from around 1996. Inciter is now a regular performer at Show Down Mas Camp during the Carnival Season.

"Bloaters", with his height and size, played centre with Raiders basketball team from Portsmouth during his playing days. He is now the sponsor of the Bloaters Champion Flag Wavers group from Portsmouth.

Many may not associate "Smokey" with competitive sports. But yes, Irvine played basketball with the short-lived Green City (1985 Division I league). However, coming from a musical family, Smokey is known by most as a musician. He started off his musical career with a band called U-Jamah, which included other basketballers Bernard, Wakas and Sammy. He later moved over to Swingin' Stars, with whom he played keyboards from 1985 to 1988.

Smokey then became a founder-member of the WCK Band that created the Bouyon genre. And, besides playing keyboards, arranging songs, and providing back-up vocals with CK, Irvine also wrote several of their 1988 and other "old school" hits such as 'Drug Free', 'Music Sweet' and 'Mopsy One More Sway'. He is currently a member of the Original Bouyon Pioneers (OBP).

(See next issue for Segment D of 5-part article)