JUMP BALL No. XXVI:(Part I). By Arlington James 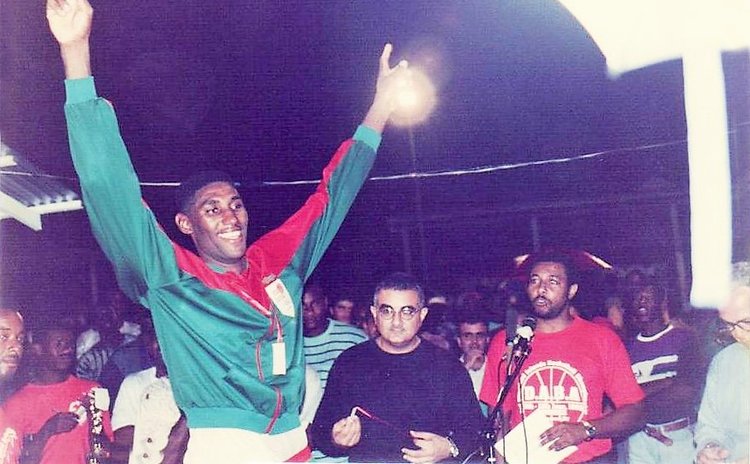 He's bearded, and at 6ft 8in he towers over the average Dominican and local basketball player. Ashworth Daniel felt like a giant when he played Division I (a.k.a. Premier Division) basketball up until a little over a decade ago.

Now 49 years old, wearing size 15 boots and weighing over 250 lb, Ashworth is known by his basketball comrades from Massacre as "De Block", "Killer" and other such nicknames.

Ashworth first became interested in basketball while attending Primary School. Interestingly basketball was not his preferred sport. It was actually cricket, as he loved batting and he was also a fast-bowler on his team, the Canefield-Massacre Primary School.

It is an accepted fact that young boys growing up in a Caribbean coastal village such as Massacre would automatically learn to swim, and young Ashworth was no exception. In fact, on several occasions he or his friends would have to swim out at sea to retrieve the game ball that had bounced into the sea and was being brought out by the ocean currents.

Initially, Ashworth played non-competitive basketball on a half-court that was located at the back of the Massacre Catholic Centre.

Subsequently, under the leadership of Sir Brian Alleyne - now a retired Judge of the Eastern Caribbean Supreme Court - then Parliamentary Representative for Massacre, the Massacre Hard Court was constructed on the current site, between the Massacre By-pass and the Main Road. It turned out that that was the catalyst that Ashworth needed for his basketball talents to blossom, and soon thereafter he began his basketball journey.

Ashworth made his debut in the mid- to late-1980s, playing in the Intermediate Division with Braves, to be followed by Tar Heels; both teams hailed from the west coast village of Massacre. Interestingly, although Ashworth attended the Clifton Dupigny Community College (CDCC) he never played with that institution's team; at the time CDCC competed in the Intermediate Division (officially known then as Division II) of the national league.

Within a short time "Killer" moved up to Division I where he first played with Killer Bees from around 1990, to be followed by Blazers a few years later. Ashworth remained with Blazers for several years – until his retirement in 2006 – and assisted that team in capturing 7 of their championship titles. They added more silverware to their collection after he retired.

It must be noted that in fact, Ashworth was a founding member of Blazers' senior team, together with other players such as Jeff Jeremy, Lyndson Lynch, Carlisle Green, Randy Defoe and others. He would then go on to make his mark as one of the big Centres in Massacre's and Dominica's basketball.

Ashworth got selected to Dominica's National Team soon after he stepped up to Division I and first donned national colours in 1993, assisting Dominica to capture the 5th Windward Islands Basketball Championship held here in The Nature Isle.

In that Tournament, Ashworth did not disappoint his Massacre home-fans or the enthusiastic and expectedly partisan Dominican supporters. In the three matches, he sank an aggregate of 30 pts (13 from 21 field goals, plus 4 from 5 free-throws); led Dominica's offensive rebounding with 11 "boards"; grabbed another 9 defensive rebounds; and, true to his nickname, De Block led the Tournament in blocked shots with 10 big ones.

Ashworth's list of awards is rather short but includes MVP, and Most Improved Player, in 1990 while he played in Division I with Killer Bees. But more significantly, in 1994 he was voted Most Valuable Player (MVP) in the OECS Basketball Championships held in Dominica that year. A great honour, indeed.

The "Big Man from Massacre" further represented Dominica when, as a member of Blazers basketball club, the latter participated in the OECS Champion-of-Champions Tournament in Grenada where he hit a mammoth 42 points in a game versus the team from Barbados; that was his biggest individual game-score while representing Dominica! (Photo courtesy Dominica News Online. Article concludes in the next edition of Jump Ball.)