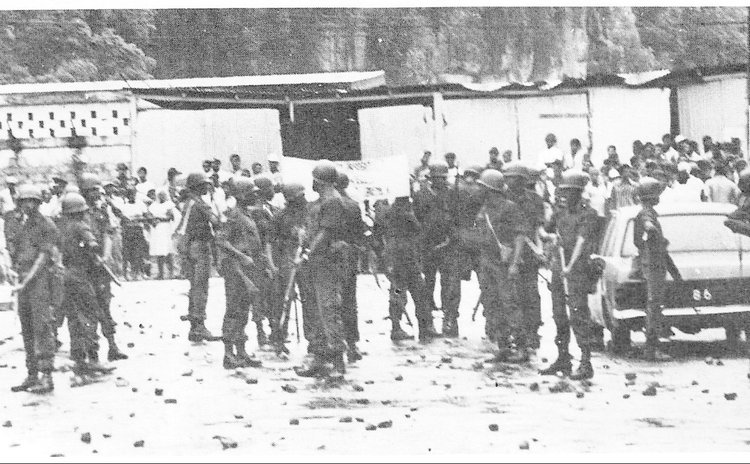 Dominica has a love/hate relationship with the 29th day of the month.

29th May 1979 the people rioted in Roseau and precipitated the overthrow of a regime;

29th July 2021 the parliament of Dominica was ASSASSINATED by the goons of modern-day Papa Doc/Adolf Hitler/ Saddam Hussein/Pol Pot all rolled into one.

The root cause of this assassination of the Parliament is that the Leader of the Opposition Lennox Linton had the rudeness not to sit and listen to Roosevelt Skerrit read a speech which was written for him(Skerrit) by unknown persons. But the stage for this was set the day before. Charles Savarin, the man at the centre of the May 29th "coul wooch brigade" coup, took the opportunity in his own budget address that morning, to remind Dominicans of the number of violent uprisings which had taken place in the region in recent history. Skerrit's response was… "it won't happen here". Cowards die many times before their death.

Parliament is often described as the highest court of the land. There are provisions in the Constitution and the Standing Orders of the House which regulate how parliament should function. The Speaker is the guardian of those rules and must ensure that they are applied fairly and equitably. Regrettably, Joseph Isaac, current Speaker of the House, was the biggest culprit and chief assassin of the parliament on the 29th of July. The so-called privilege motion which was cited to curtail the time allotted to the Leader of the Opposition was introduced by Isaac instead of another member of the House. The 'offence' which they claim was committed by Mr Linton happened at the sitting the day before the motion by Assani. Therefore, according to the Court of Appeal judgement of Redhead J in the case of Sabaroache vs Speaker of the House, no breach of privilege was committed.

Joseph Isaac, under the direction of Skerrit, Alix Boyd Knight and Anthony Astaphan, is fully responsible for this egregious assault on the parliament. His commitment to prove his blind loyalty to Skerrit has compromised his ability to think logically. He is told to jump and his response is 'how high'.

The goons who went into the chambers and the precincts of parliament went there to do no good. They were invited there by Joseph as directed by Skerrit. They were under the command of Commissioner Corbette who was himself present.

Standing Order 48 prohibits the presence of firearms in the House. The goons had guns in the House. Who allowed that to happen? The public records of the State show that the top goon is not to be trusted with the care and handling of firearms.

The main gate out of the precincts of the House was locked by the police. Why? We can only guess.

Why were there so many high ranking officers of the police force present? Recall there was no issue when the House adjourned the day before. The Leader of the Opposition went well prepared to deliver his response to the budget statement. To conclude that we believe the police were involved in a conspiracy to assassinate members of the opposition is not farfetched. Recall that there has been total silence from them that they facilitated the two hitmen who invaded Lennox Linton's property in 2019. Inspector Hunter may wish to say what he knows about this one. Just as he knows about the identity of Choksi.

Dominicans, our country is in danger. The current leader believes that we all are his personal property to do with as he pleases. Today it is Linton, Hector, Lugay and the parliamentary opposition. Tomorrow it will be you or a member of your family. We cannot depend on the judiciary, the Bishop or ANY of our institutions to rescue us.

They are all compromised.