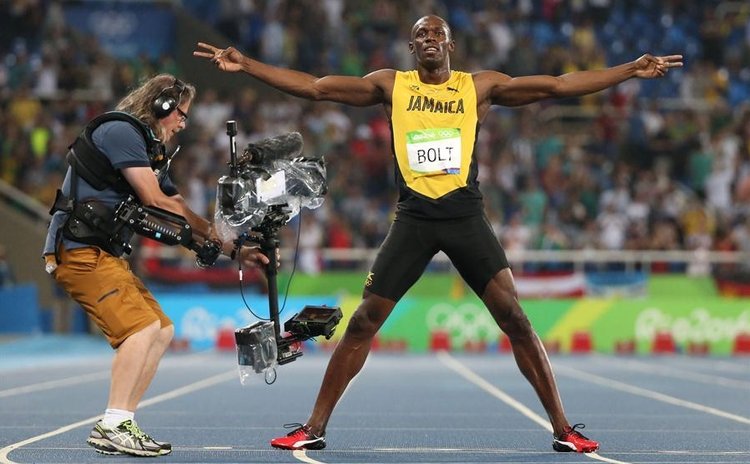 RIO DE JANEIRO, Aug. 18 (Xinhua) -- Usain Bolt said on the eve of Thursday's Olympic 200m final that the race could be tighter than he originally thought.

And while that might not have been the case, the Jamaican fell short of his stated goal of breaking his own world record, which has stood since 2009.

Running in lane six, Bolt made his customary slow start before charging clear of the field around the 80m mark. From there, the result was never in doubt.

But the 29-year-old was visibly disappointed after the race, throwing his arm to the ground and grimacing.

Despite not quite living up to his own lofty standards, Bolt's underlying goal of an unprecedented "triple-triple" in Rio remains on track.

Another triumph with Jamaica's 4x100m relay team on Saturday would give Bolt an unprecedented third straight clean sweep of Olympic sprint titles.

The men's 200m final concluded a day in which the United States won four of the six athletics gold medals decided at Rio's Olympic Stadium.

The first came when Kerron Clement ended his long wait for Olympic glory in the 400m hurdles. The 30-year-old finished in 47.73 seconds, his best time of the year, to beat Kenya's Boniface Mucheru by five hundredths of a second. Turkey's Yasmani Copello claimed bronze in 47.92.

It was Clement's second Olympic gold medal, to go with his 4x100m relay triumph in Beijing.

His compatriot Dalilah Muhammad took gold in the women's 400m hurdles, holding off a fast-finishing Sara Slott Peterson of Denmark.

Ashley Spencer of the US claimed bronze in a personal best 53.72. The Czech Republic's dual world champion Zuzana Hejnova finished fourth in 53.92.

Ryan Crouser broke the Olympic record as the US grabbed gold and silver in the men's shot put.

Ashton Eaton bagged the gold medal in the men's decathlon, finishing with 8893 points, 59 points ahead of silver medalist Kevin Mayer of France. Damian Warner of Canada was the bronze medallist with 8666 points.

The US controversially qualified for the women's 4x100m relay final, recording the fastest time of the semifinals after being granted a re-run.

Earlier, the reigning Olympic champions dropped the baton during the second exchange between Felix and Gardner in the second heat.

In a statement, officials said the race referee deemed Felix to have been obstructed after reviewing video replays.