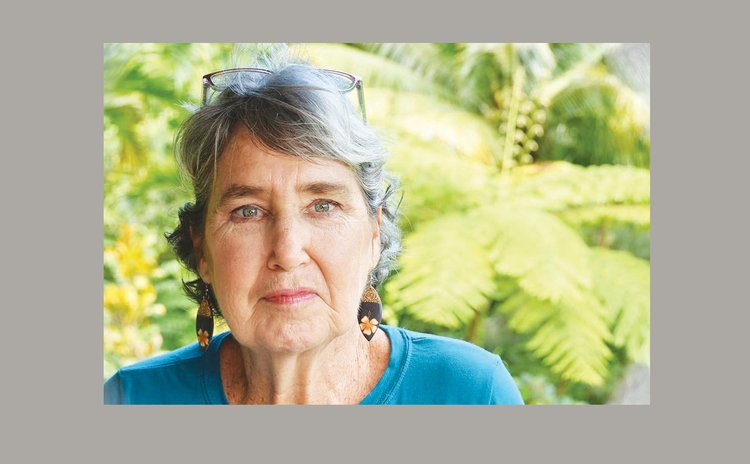 An award-winning writer, who has made Dominica her home, continues to draw inspiration and creativity from the country to grow her collection of works and cement her writing legacy.

Kristine Simelda, from Dayton, Ohio, first visited Dominica with an international non-governmental organization (NGO) that focused on wilderness preservation and reducing human impact on the environment.

"I came in 1990 with World Wildlife Fund, on a tour of the island and returned a few times over the years. In the meantime, fell in love with a local man. I moved out here in 1994 and we got married."

The marriage didn't work out but Simelda plunged herself into island life, immersing herself among the people and enjoying all that Dominica has to offer.

"I have a deep and abiding love for Dominica and it's something I felt when I first came here. It felt like I had never been anyplace else, although I had traveled the world. I guess it was just the friendliness of the people and the incredible wild beauty of the island."

She has published three novels

As a retiree and full-fledged writer, she has released three novels, a novella, a young adult novel, and several published pieces of fiction.

Before her writing career was established, this mother was an artiste, a horse trainer, a gallery manager, and a restauranteur, just to name a few. Simelda's work reflects her experiences in Dominica as she passionately writes about cross-cultural living with empathy and respectful appropriation.

"I am always amazed by the sights, sounds, smells, and cultural heritage. But I have to be careful in terms of this dreaded cultural appropriation. I am a citizen but I am not a native Dominican and I have to make sure I maintain empathy."

Simelda, who won the People's Choice Award for Dominican Literature in 2018 with her novel Nobody Owns the Rainbow is an avid champion for social and environmental causes. She is fully aware of the changing landscape around her.

"When I came here, I had to sleep with earplugs because the crapaud were so loud. Now there are very few crapaud and it's amazing how fast that happened. When I got this place in Layou Park, I had two rivers on my property, now because of deforestation and hurricane Maria the physical topography of the landscape has changed."

The author, who once owned a café in Scotts Head - the village where she initially lived in Dominica - has also noticed a change in the people from when she first arrived here over 25 years ago.

"People have changed a lot with the era of technology. There was the sweet, kind village life I experienced here. And I find over the years that sweetness has seeped out of the place."

The recent book influenced by the late Nelly Stharre

Kristine stays in touch with the Dominican people as her most recent novel, Rise Up Sista, (a book about female friendship and the power of music) published in late 2021, was influenced by local reggae artiste, the late Nelly Stharre.

Simelda also advocates for a suitable Roseau Public Library, a place dear to her heart as she spent many hours there devouring books about Caribbean culture.

"The Library question is up in the air. Some people want to restore the building, others want to build a new structure on the same site. And the meantime, time's wasted. Where's my Library?"

As for the future, Kristine is content to continue her life in paradise reading, writing, and enjoying the island. Her debut novel, A Face In The River, published in 2015 is being turned into a memoir.

"This heroine experienced many of the same joys and disappointments that I experienced in Dominica. I'm really looking forward to getting that memoir out there. To have a thirty-year perspective on when I first arrived here and how I transformed mentally is very cathartic for me."

Simelda's other literary works include River of Fire and Back to The River.