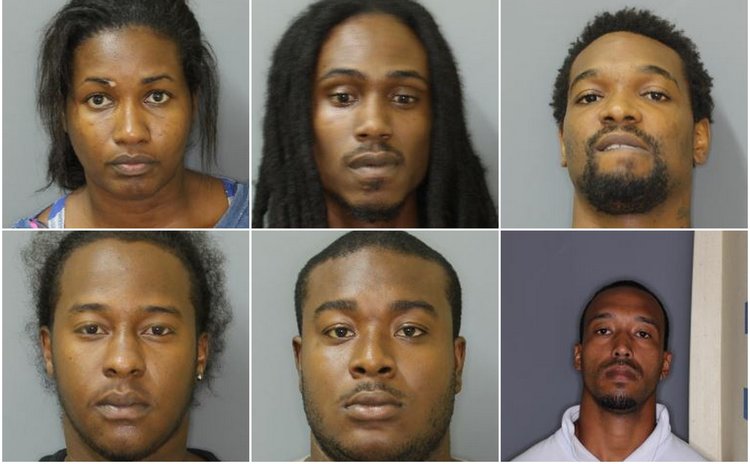 Magistrate Bernard Pacquette has denied bail to the six persons who were charged with the robbery of Jewellers International located on the ground floor of the Fort Young Hotel.

They are: Akim Anton Francis, Elrado Ducreay, Cynthia Dorsette, Craig Christian and Michael Magloire and Jason Dubique of St. Maarten. They were arrested and charged with the May 21, 2016 armed robbery.

During the bail hearing, the prosecution brought in Inspector Robertson Laurent who told the court that the police have not recovered the 45 Rolex watches that was stolen.

"We believe that they are still on island and are optimistic in retrieving them. This crime has an international connection and we fear that if those charged are released on bail it would hinder the recovery of the watches," Inspector Laurent told the court.

He also stated that it would also significantly interfere with their investigations since those charged may interfere with witnesses and given the gravity of the crime they may also abscond.

Inspector Laurent also told the court that the police have been searching vigorously for the stolen items and have conducted and executed search warrants and also checked "bank accounts" of several people. The police, he told the court, have so far recovered one firearm used during the robbery and the cops believe that another is still missing.

"My investigations are wide and believe there are others out there who may be connected to this crime," he said.

But Darius Jones, Glen Ducreay and Gina Dyer Munro (who is holding papers for Joshua Francis) all told the court that the prosecution was "on a fishing expedition" and had not provided "a shred of evidence to support their claim for denial of bail."

"The prosecution must come with full reasons and grounds to move the court…the onus is on them, the prosecution, and they have not discharged that burden to the court," one of the lawyers said. The lawyers contend that the police had 15 days to investigate the incident against Christian, Dorsette and Ducreay.

"There is no link or nexuses linking Dorsette to the crime, the prosecution has no material evidence," Glen Ducreay told the court.

The bail application for Craig Christian will be heard on June 10, 2016 since his lawyer, Tiyani Behanzin, has filed an application charging that the State had "abused the process" against his client.

In his ruling, Magistrate Bernard Pacquette stated that the evidence of Inspector Laurent was "telling" especially when he said "this crime has an international connection."

This he said was "uncontested" by the defense who did not cross-examine the Inspector. He also stated that the prosecution had offered no evidence of the possibility of the accused absconding. He then stated that he was satisfied with the evidence of Inspector Laurent and will deny bail; his decision will be reviewed in 30 days.

The lawyers, however, gave notice to the court immediately that they will be applying again for bail before the 30-day period ends.