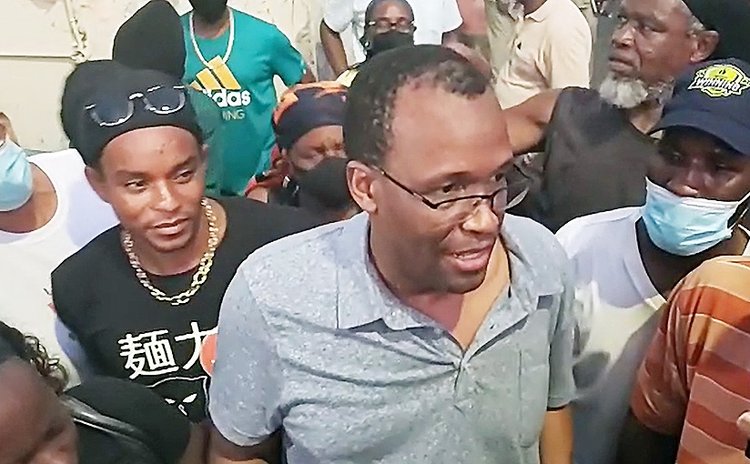 Dr. Fontaine outside the magistrate court after the first granting of bail

Twice last week, tempers flared in the Roseau Magistrate court when Dr. Thomson Fontaine's legal team sought his release from police custody. And though bail was granted, the court has imposed stringent measures on the South Sudan diplomatic and international economist.

Dr. Fontaine made his first court appearance on April 25, following his arrest on April 23, 2022, at the Douglas Charles airport on arrival in Dominica. His arrest stems from an incident that dates back to February 7, 2017, when the parliamentary opposition, United Workers Party (UWP) held a meeting on Kennedy Avenue in Roseau calling for the resignation of Prime Minister, Roosevelt Skerrit.

Following the meeting, several businesses in the city were vandalized and more than a year later, in October 2018, charges were brought against opposition members including Opposition Leader, Lennox Linton, former Prime Minister Edison James, and Dr. Fontaine who were charged with inciting violence. Former Deputy political leader of the UWP Joshua Francis, along with Nicholas George and former UWP Member of Parliament, now Speaker of the House of Assembly, Joseph Isaac were charged with obstruction of justice.

While the matter against James, Francis, George, and Isaac has been adjourned sine die (without a set date for resumption), Dr. Fontaine's absence for two court appearances in 2018 led to presiding magistrate Asquith Riviere issuing a bench warrant for his arrest on November 22, 2018.

When the matter was heard before magistrate Michael Laudat on April 25, Richards urged the court to consider the reasonableness of Dr. Fontaine's absence given that he was on an assignment for the United Nations (UN) abroad. He further stated that his client was not absconding from justice and wanted to return but was bonded by his commitment.

Richards encouraged the magistrate to either release, Dr. Fontaine, with a warning to appear at his next scheduled hearing or accept bail for the defendant. Magistrate Laudat said the latter would be considered and asked that the charges filed in 2018 by the police be read to Dr. Fontaine since he had never appeared in court.

Dr. Fontaine then pleaded not guilty to the summary charge of obstruction of justice but was not required to enter a plea on the indictable charge of incitement.

A bail application was then put forward by attorney Shillingford-Marsh who said the former UWP senator and former International Monetary Fund (IMF) economist has a reputable character, and significant ties in Dominica, and was very remorseful for his action.

The acting Director of Public Prosecution (DPP) Sherma Dalrymple (DPP) then stated that she was not satisfied that the defense had addressed a critical section of the requirement of bail, the public interest in granting the defendant bail.

In her response, Shillingford-Marsh averred that the defense foresees extreme delays in the case hence "this relatively young man, 57 years old, of a productive life still capable of working, rather than having him on remand at the prison it is in the public interest for him to be out in society where he can contribute to the development of Dominica."

Following hours of legal squabble, magistrate Laudat, satisfied with the defense argument, said he would grant bail. The defense then presented former Chief Magistrate, Gail Royer, as a surety for Dr. Fontaine; however, certain information required by the court was not made available.

The presiding magistrate then granted "conditional bail" to Dr. Fontaine in the sum of $75,000, until April 29, 2022, when the defense is required to submit all relevant documents to the court.

When the matter returned to court on April 29, at the end of Dr. Fontaine's four-day "conditional bail" the day's proceeding was not without contention.

At the hearing, Dr. Fontaine's surety, Royer, underwent a means and control test by attorney Prevost.

Under cross-examination by the acting DPP, Royer said prior to March 25, 2022, she did not recall the last time she had seen Dr. Fontaine and she and the defendant did not speak regularly.

Defense attorney Richards who was also in court then attempted to re-examine the surety on her use of the "regularly" for the court's record but magistrate Laudat insisted that the court needed no further clarification.

Richards insisted that the court was making a decision contrary to the interest of their client.

Fiery exchange between lawyer and magistrate

Both the magistrate and the attorney stood resolute to their position which resulted in a fiery exchange and the matter was stood down for later that day. Magistrate Laudat informed Dr. Fontaine that since his conditional bail had expired and he had surrendered to the court, he must be placed in police custody until the resumption of his matter.

When the matter resumed at 3:30, the magistrate again informed the attorneys that a new bail application had to be made for Dr. Fontaine since his conditional bail had expired.

However, Prevost and Richards maintained that since the previous bail was not revoked there was no need for a new bail application as they were only there to present certain information required from the surety.

"Mr. Fontaine, your lawyers are wasting the court's time," magistrate Laudat said to the defendant. "The question is do you want bail?"

In response, Dr. Fontaine stated, "Your Honor, I thought bail was already granted to me."

The acting DPP in agreement with the magistrate also concurred with his stance that a new bail application ought to be put forward. She said the prosecution's only concern was whether or not the proposed surety was able to meet the control test since Royer said she was not in regular communication with the defendant.

However, Richards persisted that bail was already granted and a new bail application was not warranted since the previous bail was not revoked.

Magistrate Laudat stated that Richards was defying the order of the court and asked that he be removed from the court.

"If you think I am standing as I'm required to do in presenting my client's case, do not obey this unlawful order," the attorney told the police officers in court. "Your Honor, I am not here to disrespect you but I am also not here to take any disrespect from you."

The magistrate again made an order for Richards to be detained and placed in the cells pursuant to chapter 4:20 of the Magistrate Code of Procedure Act, section 215, 'Power to Preserve Order.'

The attorney eventually stormed out of the court thereby escaping his arrest.

The surety, Royer, in giving evidence to the court said, she will communicate with the defendant more frequently via telephone calls and WhatsApp to remind him of any upcoming court date.

He was further ordered to surrender all his travel documents to the court prior to his release and must not leave the State without first applying to the court for permission to do so 72 hours in advance.

Dr. Fontaine's bail also stipulates that he must report to the Mahaut Police Station every Monday and Friday between 7:00 a.m. and 7:00 p.m. He was further barred from conducting any interviews with the media on the matter directly or through a third party. Breach of any condition will result in the revocation of his bail.

The matter was adjourned to July 26, 2022, for the trial of the charges of incitement and obstruction of justice. - By Ronalda Luke