Banana industry hanging by a thread 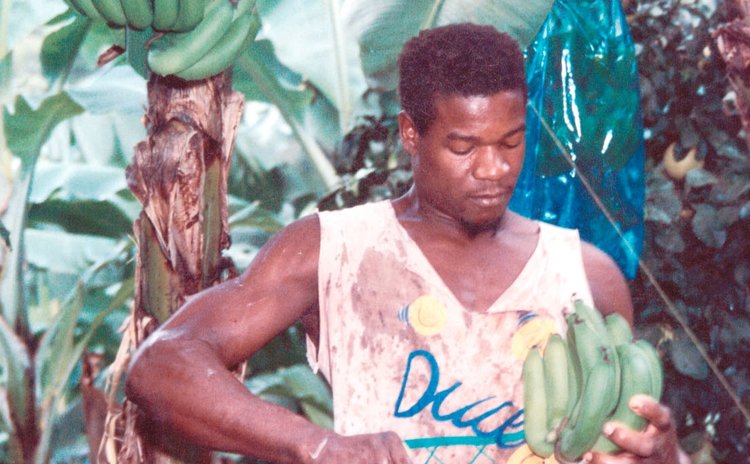 There was a time when Dominica's banana trade was booming and was the shining star of the local agriculture industry.

Today, this once vibrant industry has ground to a virtual standstill and even the most resolute banana planters are locked in a fierce battle to survive.

Many of those who remain steadfast are aging fast; they wipe sweat from their greying brows and long for the industry to revive—somehow—and return to its former glory.

Former Permanent Secretary of the Ministry of Agriculture, Raymond Austrie said the banana industry is an expanding worldwide, but it is contracting sharply in Dominica.

Black sigatoka was first detected in Dominica in July 2012 and, despite the efforts of agriculture officials, it seems to have dug in its claws for the long haul.

But Austrie, who is also a banana farmer, thinks there is still hope for the industry, provided there is innovative thinking and inventive action at every level of the sector.

"It's interesting that the peak performance followed some strong and aggressive policies by the Eugenia Charles administration to correct the ills affecting the industry…" Austrie noted.

The industry's decline, he said, began with the removal of special preferential trade arrangements with the EU market, which were eroded by the movement towards free trade.

In his view, another major drawback is the lack of consistent, aggressive policies and programmes to halt the slide.

Austrie asserted that there is no strategic long term vision for the banana industry, and also no discernible plan to achieve viable short term objectives.

To him, current industry initiatives are 'too little, too late'. "It's only now that I see the Government putting in that banana management unit…" he remarked.

Nevertheless, Austrie maintained that the banana industry is still vital to Dominica's economy and can be revived through prudent, creative management.

Recovery will not be easy, Austrie said, and it requires a clear, strategic long term vision supported by practical short term goals.

"There must be strong policy commitment from government as well as … [from the growers]," he contended.

In his view, the farmers are committed. "There is very strong commitment on the part of the growers, but it needs to be exploited," he said.

Austrie does not agree with industry insiders who think Black Sigatoka is mainly responsible for bringing the banana industry to its knees.

Instead, he blames deficiencies, on disorganization in the industry, lack of proper management and insufficient commitment to its revival. He believes that Black Sigatoka can be managed effectively if all stakeholders adopt the right approach and are united in their efforts.

"You have to have clear programmes based on the science of the disease. It has to be rigorous. . ." he pointed out.

Austrie lamented that there is no farmer-owned institution to empower the farmers and manage their affairs, a role once filled by the now defunct DAPEX.

He noted that during the industry's heyday farmers' institutions pooled resources and achieved 'economies of scale' in terms of importing supplies and financing.

This relieved government of the responsibility for such matters, he said, allowing government to focus on other important aspects of the industry.

Meanwhile, from his perspective of the current state of the industry, Austrie believes government has put the revival of the banana industry on the back burner.

"I think this is why you don't see the kind of concerted effort. I don't think the government is convinced of the benefit of the industry."

"They need to realise that it's good for food production, food security, foreign exchange and rural employment," Austrie stated.

The value of a healthy banana industry to the overall growth of the economy must not be underestimated, he asserted.

"This is why it should not be neglected," he insisted.