Waiting and hoping, farmers say they sit by the death-bed of an ailing industry 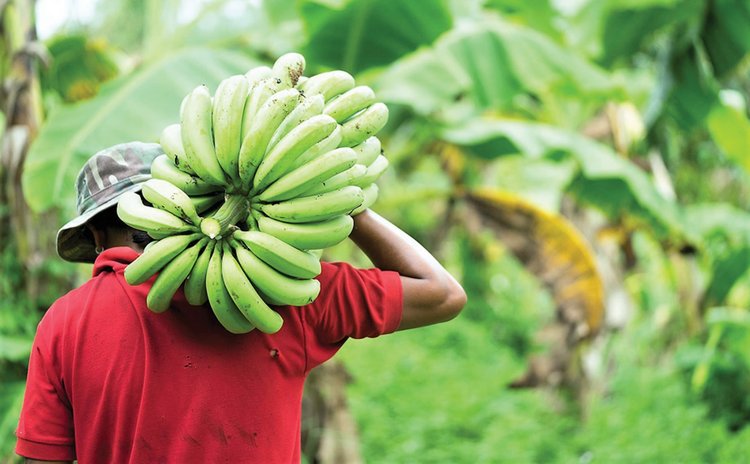 That is the view of many people we spoke to who were engaged in the once-loved banana industry.

For the younger folks, it's probably hard to believe that there was a time Dominica's banana trade was booming and was the shining star of the local agriculture industry.

Today, this once-vibrant sector is now on life support and at her bedside are the struggling plantain and banana farmers.

While some predicted its death, many others know the capability of this green gold which once littered Dominica's hills and valleys; bananas have been near death many times but the crop has been nursed back to health through prudent, creative management.

As to the cause of the demise of bananas, many point to 2015, when Dominica lost its largest international market -WINFRESH (UK)- who suspended buying bananas because of quality issues caused by Black Sigatoka, a fungus which was first detected in Dominica in July 2012.

Other farmers told the Sun that coupled with the fungus and the loss of market, the industry has been further battered under the current regime because the revival of bananas is on the back burner.

Among those who long for the industry to revive and return to its former glory is farmer Clint Rolle, who told THE SUN that while the industry is expanding worldwide, it is contracting sharply in Dominica.

He said no longer can farmers realistically dream of building their homes, send their children to universities or make a decent income from the banana industry.

The experienced farmer quoted several reasons why this may be the case: from the lack of proper access to their farms, overpriced fertilizers, the drain of skilled and unskilled workers, the lack of insurance, costly and unavailable chemicals to treat the fungus, and the list goes on.

Another major hindrance to the industry according to several farmers was the lack of support from the organization which is charged with the responsibility to promote, develop and export the country's agricultural, agro-processing and manufactured products-the Dominica Export Import Agency (DEXIA).

Rolle and a few other farmers have deemed the organization as "completely useless".

"At the moment I am overproducing to DEXIA. There is no real market to take the banana from us," he said. "When DEXIA comes by me they don't need to go by anyone else, because they are already overproduced, hence the reason we have been pushing for an extra-regional market."

Nevertheless, Rolle is confident that the banana can still be king if it's allowed its rightful place in the economy, provided there is innovative thinking and inventive action at every level of the sector.

During the industry's heyday, it is reported that a banana farmer would sell over 100 boxes per week, bringing in a monthly income of over $4000; however, things have drastically been reduced to where they now sell 30- 40 boxes per fortnight, which many agree is the worst in Dominica's history.

According to another farmer, Steve Benjamin, "our neighbouring countries like St Vincent, Antigua and St. Lucia are exporting to the EU, why can't we?"

Benjamin further noted that compared to our sister islands, farmers here are further beaten; they are forced to pay an increase of EC $7.80 for an empty box to ship bananas and most times the fruits ripen on the way due to lack of ventilation.

"We the farmers are fed-up of investing the money we already don't have into the dying industry only for the hucksters to come back and tell us most of the time that they can't pay us because the bananas spoiled on the way," he told the Sun.

With Dominica's fertile soils and abundant rainfall, Benjamin is confident that the industry can be revived to its glory days, with the proper management and sufficient commitment to its revival.

"We do still have a share in the banana market, but we need to do more diversification into avocado and citrus and when you add all of them together the farmers will be able to rise again," he said.

THE SUN wanted to find out banana production and export figures, especially three years after Hurricane Maria, but a month of trying to obtain data on current banana exports has been difficult. Each organisation involved in the management of bananas that we contacted referred THE SUN to another, to another and to another. The search stopped with DEXIA this past Friday. The agency said its data on exports over the past five years would be collected and sent to us within a week.