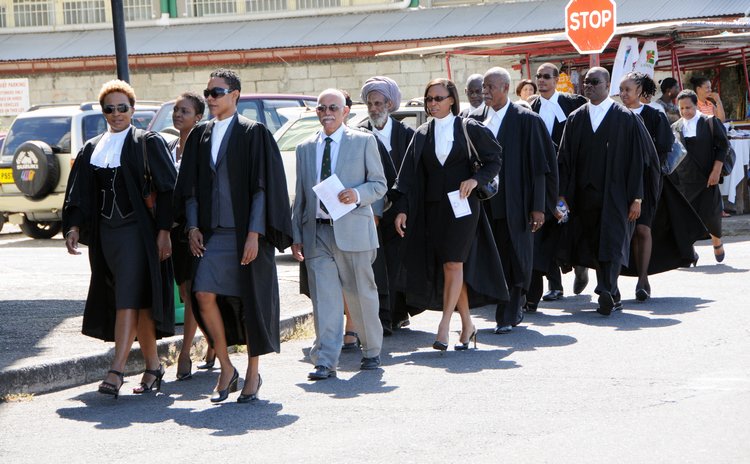 Inadequate financial resources and some level of tardiness in meeting commitments by some of the nine jurisdictions making up the members of the Eastern Caribbean Supreme Court (ECSC) were among factors affecting the court in the sub-region.

These were among issues which came out of the 70-minute address by Chief Justice, Her Ladyship Dame Janice M. Pereira in her opening address captioned "Fulfilling our Strategic Vision in Challenging times" from the High Court in Anguilla to all jurisdictions via simulcast on Wednesday, September 17, 2014 to mark the opening of the New Law Year, 2014-2015.

Dominican local law professionals and members of the public gathered at the Roseau High Court before Justice Birnie Stephenson and Errol Thomas for the 10:00am address.

Dame Janice M. Pereira quoted from the Mission Statement of the ECSC before going into the wide ranging responsibilities of the judiciary and expectations of the public and clients.

In the ECSC fulfilling its mandate, Dame Janice sectionalized the functions of the court as civil, criminal, commercial and family; as well as the challenges the ECSC experiences. She pointed out that in spite of limitations, the addition of Masters had improved the number of judgements coming out of the court; 743 in 2013 which 42 were written judgements, and that compared with 33 judgements of the Privy Council, manned with 12 judges.

She hoped that other islands would join the Caribbean Court of Justice alongside Barbados, Belize and Guyana and recently Dominica.

As the courts made more and more use of technology, the Chief Justice noted that seven of the nine jurisdictions contributed less than one percent (1.0%) of national budget to the judiciary while the highest of all contributed 1.87%.

Dame Janice Pereira also took the opportunity to welcome Justice Gertel Thom to the Appeals Bench, and also to mourn the passing of former Ag Court of Appeal Judge, Justice Suzie d'Auvergne who died last August. She began studies in 1972 and was called to the bar in 1975. The late Justice achieved her goal of being a judge in 1990. She retired in 2004.

All speakers mentioned the long pending Legal Professions Act that has been outstanding for more than 30 years. DPP Baptiste called for a review committee to make recommendations to the Attorney General towards the final stage of that legislation. Adrien Roberts hoped that the Act would finally become a reality soon.