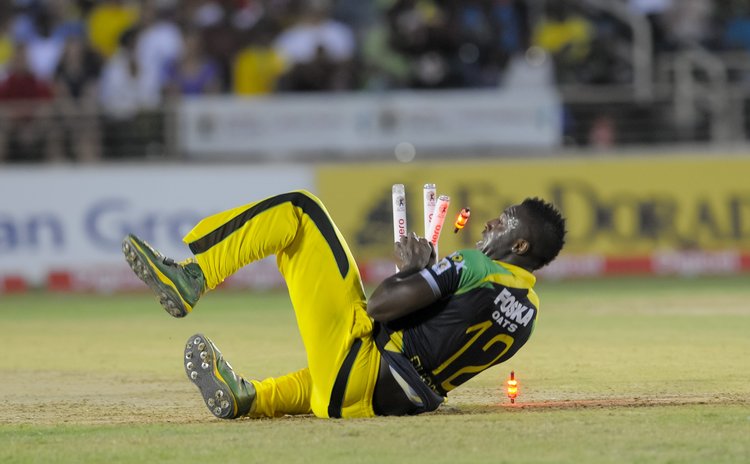 Saturday 11th July – Kingston, Jamaica: A star performance from Barbados Tridents captain Kieron Pollard with bat, ball and in the field helped to deny the Appleton Estate Jamaica Tallawahs the chance to replace their opponents at the top of the Hero Caribbean Premier League table in front of a sell-out crowd at Sabina Park.

Krishmar Santokie, the leading wicket-taker in this year's Hero CPL, opened up the bowling for the Tallawahs with a typically accurate and economical over. Dilshan Munaweera plundered Daniel Vettori for 12 runs, first coming down the wicket to smash the Kiwi spinner over wide long on before driving over cover for four. Not to be outdone by his partner, Dwayne Smith latched onto a ball that Santokie overpitched and chipped it powerfully for six.

The breakthrough for the Tallawahs came off Jerome Taylor's first ball. His extra pace and bounce was too much for Munaweera, who popped an easy catch to, fellow Sri Lankan, Mahela Jayawardene and departed for 18 off 14 balls.

After the wicket, Taylor and then Rusty Theron started to put the squeeze on the new batsman Jonathan Carter to restrict the Tridents to 34-1 in the Powerplay. The pressure told again when Carter (six off 14 balls) pulled Rusty Theron straight to Chris Lynn on the deep square leg boundary.

Tridents captain Kieron Pollard joined Smith at the crease, and together they looked to rebuild the innings. Smith broke the shackles somewhat as the halfway stage approached, cutting Vettori for the Tridents' first boundary in six overs.

Just as things were looking up for the Tridents, a terrible mix-up and an incredible throw from Santokie in the deep combined to break the partnership with a run out that left Smith heading for the dugout at 27 off 25.

Vettori then removed Misbah-ul-Haq for a disappointing three ball duck with a flighted delivery that induced a thick edge to the keeper. Pollard had a let-off shortly after when a top edge just evaded the leaping Walton behind the stumps.

Jason Holder struck some fine boundaries in a cameo of 26 from 22, but Pollard took the lead in the Tridents' final assault with a ramp over long leg and then a six and a four off consecutive balls from Krishmar Santokie.

Pollard had another life when Jermaine Blackwood took the ball only for it to bounce out of his hand when his elbow hit the ground. Rain then interrupted the game for about an hour and broke up the Tridents' momentum: Andre Russell knocked out Jason Holder's stumps with the first ball after the restart.

Two balls later Russell had another victim when Navin Stewart heaved the ball to Daniel Vettori, but Russell was down on the floor when he was struck on the leg by a powerful drive from Kieron Pollard in his follow-through. He bravely completed his over before limping off for treatment.

A chaotic and exciting final over saw Pollard reach his half-century off 35 balls, and take his side to a competitive 146-7 with a last-ball maximum over the wide-midwicket boundary.

Tallawahs captain Chris Gayle started in ominous fashion, top-edging a massive six off the bowling of Jason Holder. It was not to be his night however, as he smacked a powerful drive to extra cover. Australian batsman Chris Lynn started brightly, but perished to a soft dismissal when Pollard brought Robin Peterson on to bowl, chopping onto his stumps for 13 off seven.

Pollard then moved himself to silly point and, sure enough, Mahela Jayawardene popped the first ball to him where he took a stunning reflex catch. Peterson claimed his third wicket in the over when Blackwood was bowled playing for turn that wasn't there.

After losing four wickets in the Powerplay, the Tallawahs looked to rebuild through Walton and Bonner, but the Tridents continued to pile on the pressure and they needed nearly eight an over from the final ten.

The pair looked to be taking the match close into the final overs, but Rayad Emrit managed to sneak one through Chadwick Walton's defences to end his anchoring innings of 46 off 45 deliveries.

Andre Russell is known for occasionally pulling off impossible run-chases, but tonight was not his night. He smashed 15 off 10 balls before Pollard once again got involved and held onto a skier at the third attempt. Jason Holder held his nerve in the last over to close out a memorable 17–run win and extend their lead at the top of the Hero CPL.